Close-up portrait of Bela Milstein wearing an armband in the Radom ghetto. 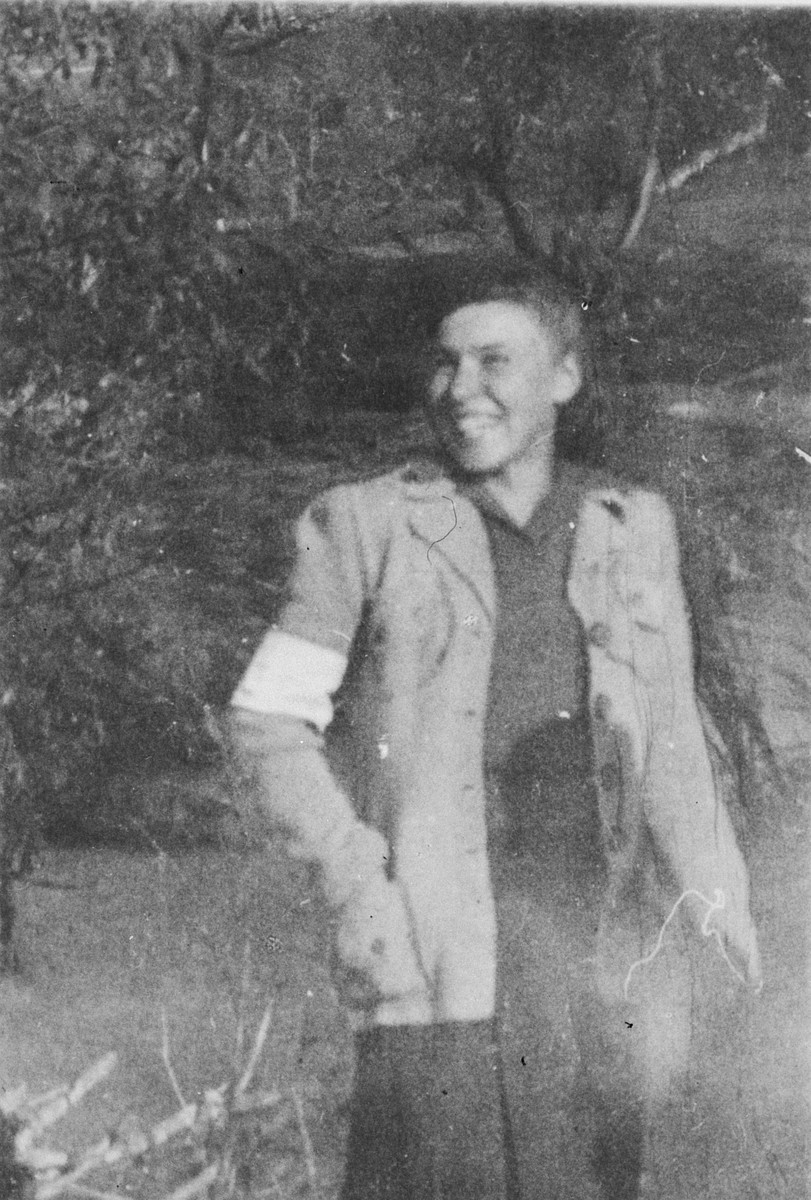 Close-up portrait of Bela Milstein wearing an armband in the Radom ghetto.

Biography
Jacob Gutman was born on October 2, 1922 in Radom, Poland. He had two older siblings, Rayzl and Chaim, and a younger brother, Elek. Jacob's father earned a meager living cutting leather; the family was poor and lived in a one room home without running water. Jacob's father was very active in the Bund, and Jacob would often accompany his father to political lectures. Jacob began attending cheder at the age of five, and two years later he enrolled in a Polish public school as well. In 1936, after completing public school, Jacob began working as an apprentice in his Uncle David's cabinet shop. He worked there during the day, and attended trade school in the evenings. After three years he passed the exam to become a cabinetmaker. On February 22, 1939, when Jacob was still a teenager, his father had a heart attack and passed away at the age of 49. That fall, Germany launched a surprise attack on Poland. One week later, on September 8, 1939, German troops occupied Radom and began enacting anti-Jewish restrictions. Since Jacob was a trained carpenter, he was assigned a job building shelving for an S.S. warehouse. His older brother Chaim later joined him there as well. On April 7, 1941 the Germans forced the Jewish community to move to one of two ghettos in the city. Jacob, his mother, and two brothers shared one room with another family of five. His sister Rayzl lived separately with her husband and child. Jacob socialized with a group of young people that included Bela Milstein, who became his girlfriend. In August 1942 the Germans began the liquidation of the two Radom ghettos. Right before the liquidation, Jacob smuggled his younger brother into the labor camp where he and Chaim worked. The three brothers stayed together for the rest of the war. However, Jacob's mother, sister, brother-in-law, and two year old nephew were among those sent to Treblinka, where they were killed on arrival. The following spring (1943), Bela and her sister Mania were transferred to the Blizyn concentration camp. Jacob delayed leaving a communal bath in the hope of seeing Bela one last time. As punishment, an SS guard severely beat Jacob, breaking his wrist and injuring his shoulder. After arriving in Blizyn, Bela managed to smuggle a letter and a photograph of herself to Jacob. He sewed a hiding place in his pants and kept her photograph with him throughout the rest of the war. Jacob and his brothers were later transferred to the Szkolna concentration camp, and when the Soviet army approached in July 1944, they were evacuated to Tomaszow. From there they were sent by cattle car to Auschwitz, on July 26, 1944. However, instead of entering the camp, the Gutman brothers almost immediately were reloaded onto another train and taken to Vahingen Enz near Stuttgart. There, they were put to work blasting a quarry for an underground munitions factory. Jacob worked on the night shift, and his two brothers were assigned to the day shift. Jacob became very ill and depressed, but he survived thanks to a Belgian slave laborer who shared his better food rations with him. One day he saw Chaim and Elek waiting in line to be transferred to another camp. Jacob bribed a Kapo with a slice of bread and received permission to leave with his brothers. They went to Hessenthal to build runways for a military airport. On April 20, 1945, which coincidentally fell on Elek's 20th birthday, the Germans evacuated this camp and sent the prisoners on a train towards Dachau. After Allied planes bombed the railroad, the prisoners continued by foot to Dachau. They did not remain there long, and next were sent in the direction of the Tyrol where they were liberated by African American soldiers ten days later. The American army brought the three brothers to the Feldafing DP camp. Chaim and Elek left for Italy with the thought of proceeding from there to Palestine. Jacob actively began searching for Bela, showing her photograph to other survivors and asking whether they had seen her. After initial failure, he moved to Mittenwald where he worked in a United States Army officer's mess. One day, an officer told him that they had taken his girlfriend and her sister into custody. Bela had returned to Radom where she learned that Jacob was alive. She came to Mittenwald looking for him without proper documents and arrived during the middle of a round-up of potential smugglers. Jacob arranged for her release and notified his brothers that he had found her. Chaim and Elek returned from Italy in order to attend the wedding. Chaim subsequently married Mania, Bela's sister. Jacob became secretary of the Jewish community and was assigned the task of screening Ukrainian DPs for war crimes. After his life was threatened, he resigned to become the manager of the Children's Nutritional Center. Jacob and Bela, together with Chaim and Mania and their one year old son Aron, immigrated to Canada in 1948. Elek moved to Palestine and arrived on the day Israel became independent. In 1972 Jacob returned to Germany to testify in a Hamburg courtroom against the former Gestapo head of Radom.