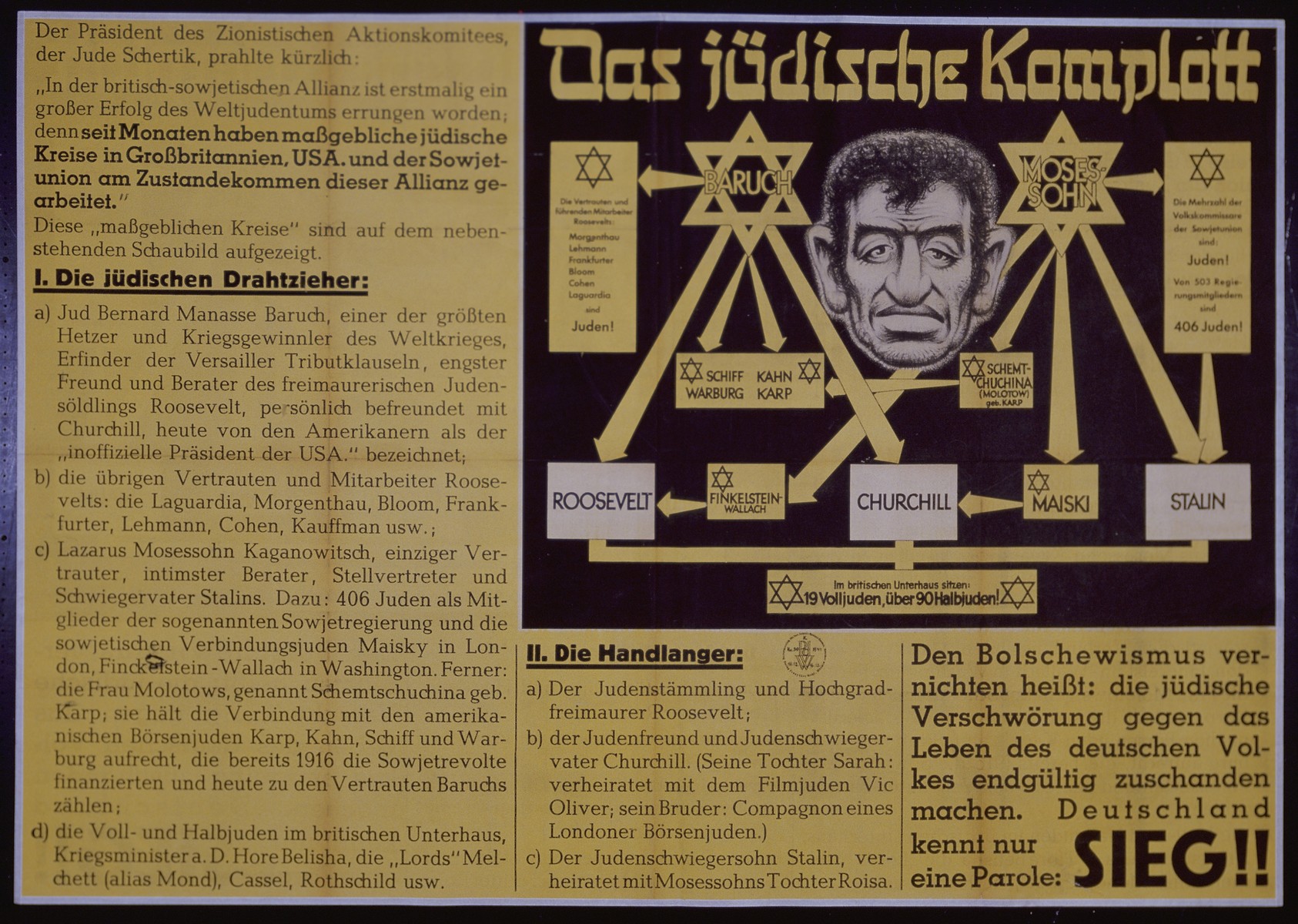 The President of the Zionist Action Committee, the Jew Schertik, recently boasted that "The British-Soviet alliance is the first great victory for the world Jewry, for key Jewish groups in Great Britain, the USA, and the Soviet Union worked on this alliance coming to fruition for months." These "key groups" are shown on the adjacent diagram.

1. The Jewish Puppeteers:
a) The Yid Berhard Masse Baruch, one of the biggest warmongers and profiteers of the [First] World War, originator of the Versailles reparation clause, close friend and advisor of the freemasonic Jew-hireling Roosevelt, personal friend of Churchill, now called the "unofficial President of the USA" by Americans;
b) the rest of the confidentes and associates of Roosevelt: LaGuardia, Morgenthau, Bloom, Frankfurter, Lehmann, Cohen, Kauffman, etc:
c) Lazarus Mossessohn Kaganovich, sole confidante and most intimate advisor, agent, and father-in-law of Stalin. Additionally, four hundred and six Jews are members of the so-called Soviet regime and the Soviet Jewish contacts Maisky, in London, and Finckelstein-Wallach, in Washington. Futhermore, Molotov's wife called "Zhemchuzhina," was born [with the surname] "Karp." She maintains contact with the America Jew Stock brokers Karp, Kahn, Schiff, and Warburg, who financed the Soviet revolution in 1916 and who today are close with Baruch;
d) the "full" and "half" Jews in the British House of Commons, former Secretay of State for War Hore Belisha, the "Lords" Melchett (alias mond), Cassel, Rothschild, etc.
II. The Henchmen
a) Roosevelt, a Jewish descendant and high-grade Freemason;
b) Churchill, the Jew lover and father-in-law of a Jew.
c) Stalin, the son-in-law of a Jew, who married to Mosessohn's daughter Rosa (Kaganovich).

To destroy Bolshevism means to destroy the Jewish plot against the existance of the German Volk once and for all. Germany knows only one slogan: Victory!
The Confidantes and leading associates of Roosevelt:
Morgenthau
Lehmann
Frankfurter
Bloom
Cohen
Laguardia
are Jews!
The majority of the People's Commissars of the USSR are: Jews!
Out of five humdred and three [commissars] there are Four hundred and six Jews!
In the British House of Commons there are: Nineteen Jews and over ninety "Half-Jews!"