A group portrait of impoverished Jews in Drohobycz standing in front of a stack of lumber. 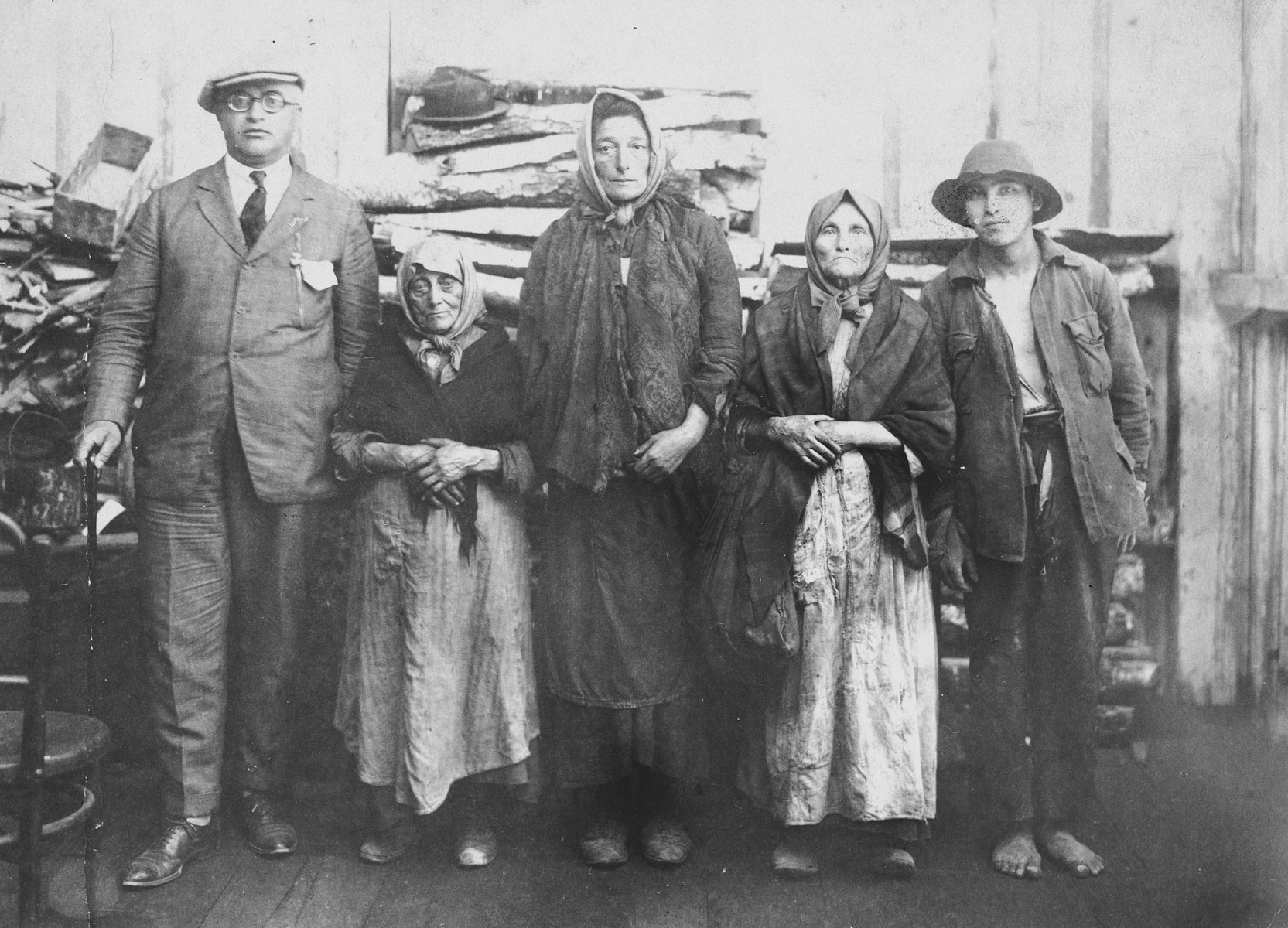 A group portrait of impoverished Jews in Drohobycz standing in front of a stack of lumber.

On the far left is Harry Handel, who is visiting from America.

Biography
Leopold Paul (Pincus) Lustig was the son of Herman Lustig (b. 11/3/00) and Tilia (Otilia) Graumann Lustig (b. 10/15/06). He was born on December 8, 1923 in Drohobycz (Drogobych), 60 miles south of Lvov. His family owned a market-stall that sold flour, grains, sugar, and coffee. Though the family was impoverished, they were quite cultured. His aunt played the piano and taught him the piano as well. The family's difficult financial situation forced them to abandon the observance of Jewish dietary laws because of the high cost of kosher meat and the need to keep their stall open on Saturdays. Paul grew up speaking Polish, Yiddish, Ukrainian and some German. He attended a Polish primary school and the Waldislow Jagiello Gymnasium where he studied Jewish history, Polish literature, French and Latin. During the 1930s the family experienced both growing antisemitism and economic hardship and tried unsuccessfully to emigrate to either the United States or Great Britain. Finally in the summer of 1939, they received an invitation to come to the American consulate in Lvov to apply for a visa. However, World War II broke out before they had an opportunity to go. The German army entered Drohobycz after the start of World War II but suddenly left after one week. Instead, the town fell under Soviet occupation. The Lustigs were issued internal Soviet passports that registered Herman as a small businessman. As a result, the family became social pariahs, and Herman went to work in a flour mill. Paul continued his studies in gymnasium and graduated in June 1941 one week before the German invasion of the Soviet Union. The German army entered Drohobycz on July 3, 1941, and immediately the Ukrainians began a pogrom that resulted in the murder of some 400 Jews. Paul was among those assigned to bury those murdered in a mass grave. Starting in 1942, the Germans conducted a number of Aktions in the town, killing Jews in the surrounding forests and deporting thousands of others to the Belzec extermination camp. Among those killed were several of Paul's aunts and uncles. Paul and his family were spared, for the time being. Throughout this period, Paul's father continued to work in the flour mill and was deemed therefore an essential worker. The Germans established a ghetto in Drohobycz on October 1, 1943 and sealed it the following year.

In 1944, as Soviet forces approached the city, the remaining Jews in Drohobycz were deported to Plaszow, including Paul and his parents. From there Paul went to the Jeliczka, Flossenburg, Kaufering and Dachau concentration camps. His father, Herman Lustig, remained together with him until he perished in the Flossenburg concentration camp on November 23, 1944 from starvation and bleeding from untreated wounds. His mother, Otilia, was deported from Plaszow to the Stutthof concentration camp. She perished in 1945 during the evacuation of the camp, after the Germans forced the prisoners onto a boat which was sent out into the Baltic Sea, used for target practice and sunk.

After the war Paul lived in the Landsberg DP camp and then studied medicine and dentistry at the University of Erlangen. He immigrated to the United States in 1949 and went on to study and then teach dentistry at Harvard Dental School, where he was later honored with a Distinguished Alumni Award for his contributions to the field of dentistry as a teacher, inventor and clinician.