Jews gather by a graveside during a funeral of a girl killed by a lightning strike in the Lodz ghetto. 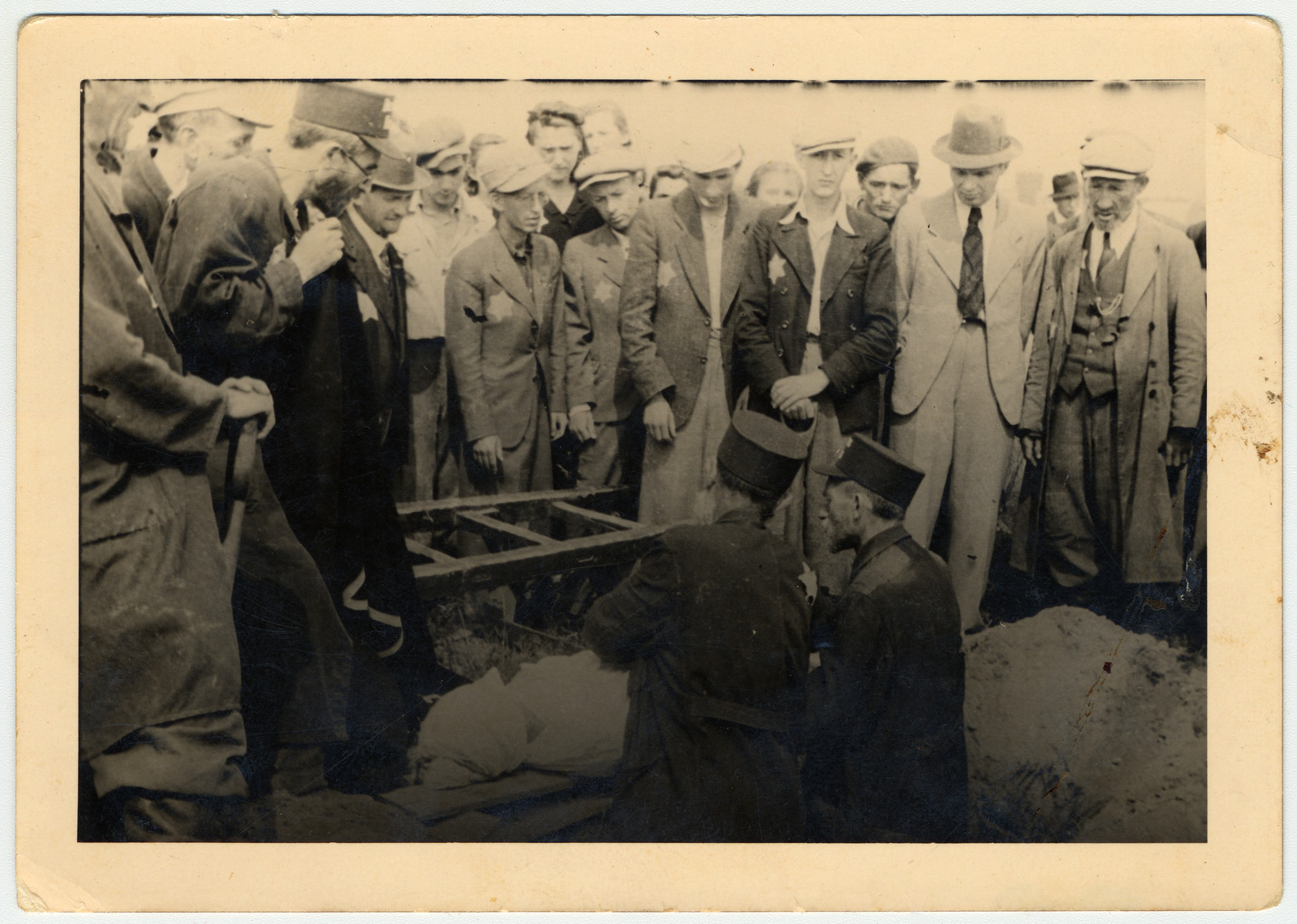 Jews gather by a graveside during a funeral of a girl killed by a lightning strike in the Lodz ghetto.

Standing third from right is Henryk Bergman and next to him, second from right, is Kaufman.

Event History
In the evening of June 27, 1941, a girl named Andzia Tenenbaum, 14 years old, went out on an open field in Marysin in order to pick some flowers when a lightning bolt struck her. Two other people, the policeman Josek Brygiel and the garden keeper Jakub Hodes, also were injured. However, Andzia died immediately. This story is described in the Polish and Hebrew versions of the "Chronicle of the Lodz ghetto" in Bulletin No.120 for June 26-30, 1941 and in Riva Chirurg's book, "Bridge of Sorrow, Bridge of Hope" (p.49-50).

https://www.ushmm.org/wlc/en/article.php?ModuleId=10005071.
Biography
Jutta Bergman (born Jutta Ita Szmirgeld) is the daughter of Benjamin (b. 1900) and Hela Hendla (b. 1896) Szmirgeld. She was born in Breslau on July 8, 1927. Her younger brother Simon was born in 1929. In 1935 their family moved to Lodz. Benjamin Szmirgeld died before the war began, so in 1940, Jutta moved to the ghetto together with her mother, brother and maternal grandmother, Sara Ryfka Lieberman. Jutta already had begun Gymnasium and was able to briefly continue her schooling in the ghetto. After finishing school, Jutta worked in a number of the ghetto workshops sewing and making saddles and straw shoes. Jutta's family was not well connected and consequently did not have the wherewithal to receive more than the basic minimal food rations. However despite her impoverishment, cold and malnourishment, Jutta also experienced joy in the ghetto resulting from her participation in the Zionist youth movement, Hanoar Hatzioni. There she befriended one of the group's leaders Henryk Bergman. Henryk is the son of Binyamin and Frymeta Bergman. He was born on September 10, 1922 and sister Ruta was born in 1925. His older brother Pinchas (b. 1916) was mobilized for the Polish army and never returned. In the ghetto, Henryk worked in the statistical department.