Members of a Zionist group in the Lodz ghetto at a Hanukkah gathering. 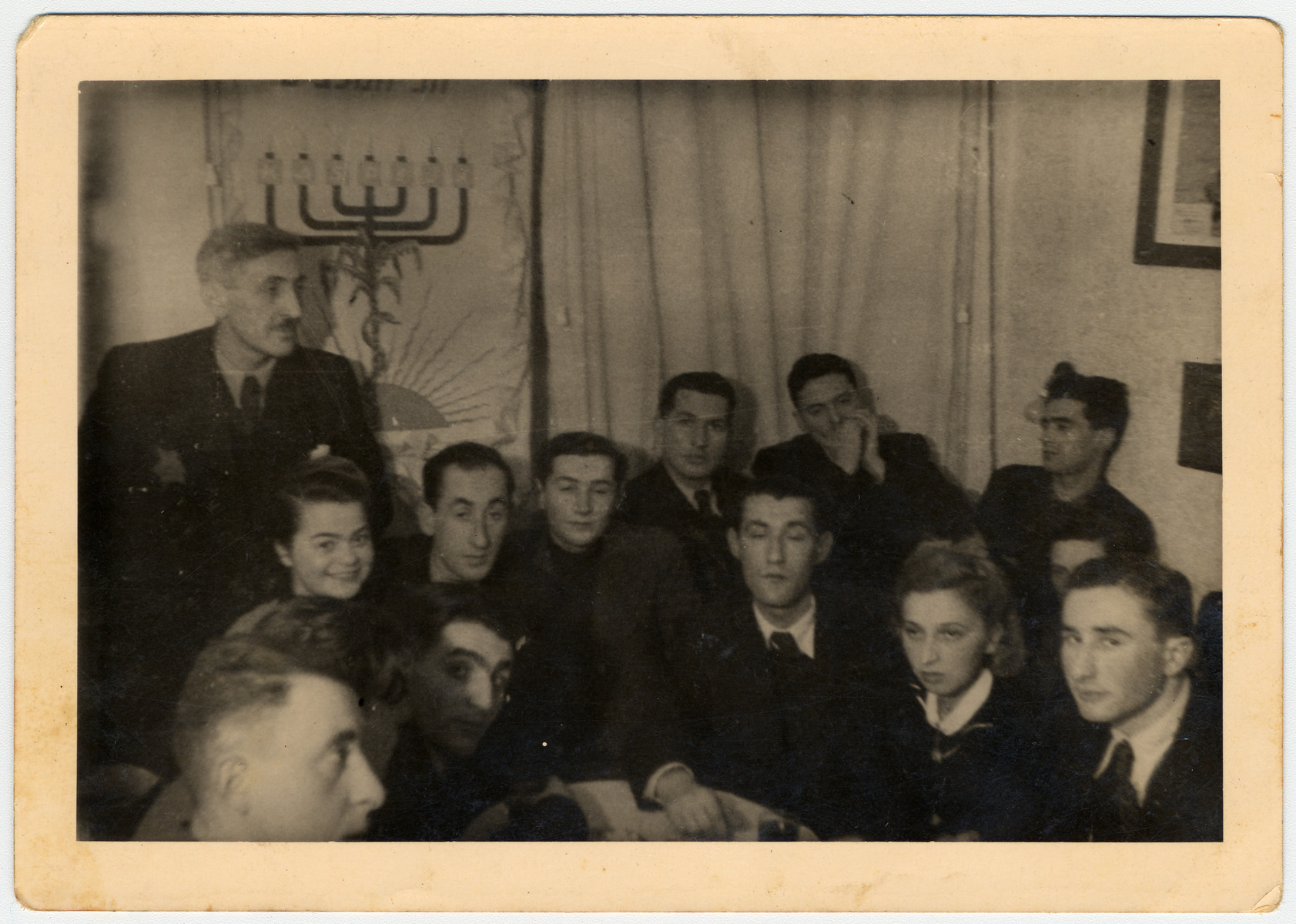 Members of a Zionist group in the Lodz ghetto at a Hanukkah gathering.

Among those pictured is Yehoshua Klugman (standing, left). Seating in the first row are Ester Grynsztajn (first from left) and Aron Jakubson (second from left in the second row). Seated in the first row on the right are Wiktor Sztajn, Mirka Sztajn and Libicki. Pictured seated in the second row on the right are Chaim Rozenowicz and next to him, against the wall, is Arie Princ (later Ben Menachem). The banner in the back reads: "1943--Festival of the Maccabees." Latin letters on the branches of the menorah spell "KASPIJK," possibly the name of the group or chapter of the organization.

Biography
Yehoshua Klugman (b. 1901) managed a textile workshop in Lodz before the war. During the occupation he lived in the Lodz ghetto with his wife Malka (b. 1901) and three children: Sara (b. 1925), Renia (b. 1928), and Avraham (b. 1923). He ran a ghetto workshop that made rugs for the Germans. He was deported in the late summer of 1944 during the liquidation of the ghetto. His two daughters survived.

Jutta Bergman (born Jutta Ita Szmirgeld) is the daughter of Benjamin (b. 1900) and Hela Hendla (b. 1896) Szmirgeld. She was born in Breslau on July 8, 1927. Her younger brother Simon was born in 1929. In 1935 their family moved to Lodz. Benjamin Szmirgeld died before the war began, so in 1940, Jutta moved to the ghetto together with her mother, brother and maternal grandmother, Sara Ryfka Lieberman. Jutta already had begun Gymnasium and was able to briefly continue her schooling in the ghetto. After finishing school, Jutta worked in a number of the ghetto workshops sewing and making saddles and straw shoes. Jutta's family was not well connected and consequently did not have the wherewithal to receive more than the basic minimal food rations. However despite her impoverishment, cold and malnourishment, Jutta also experienced joy in the ghetto resulting from her participation in the Zionist youth movement, Hanoar Hatzioni. There she befriended one of the group's leaders Henryk Bergman. Henryk is the son of Binyamin and Frymeta Bergman. He was born on September 10, 1922 and sister Ruta was born in 1925. His older brother Pinchas (b. 1916) was mobilized for the Polish army and never returned. In the ghetto, Henryk worked in the statistical department.