Postcard send from Perla Krieser from a deportation train to her two daughters in the Rivesaltes concentration camp. This is her final communication with her family before she was killed in Auschwitz. 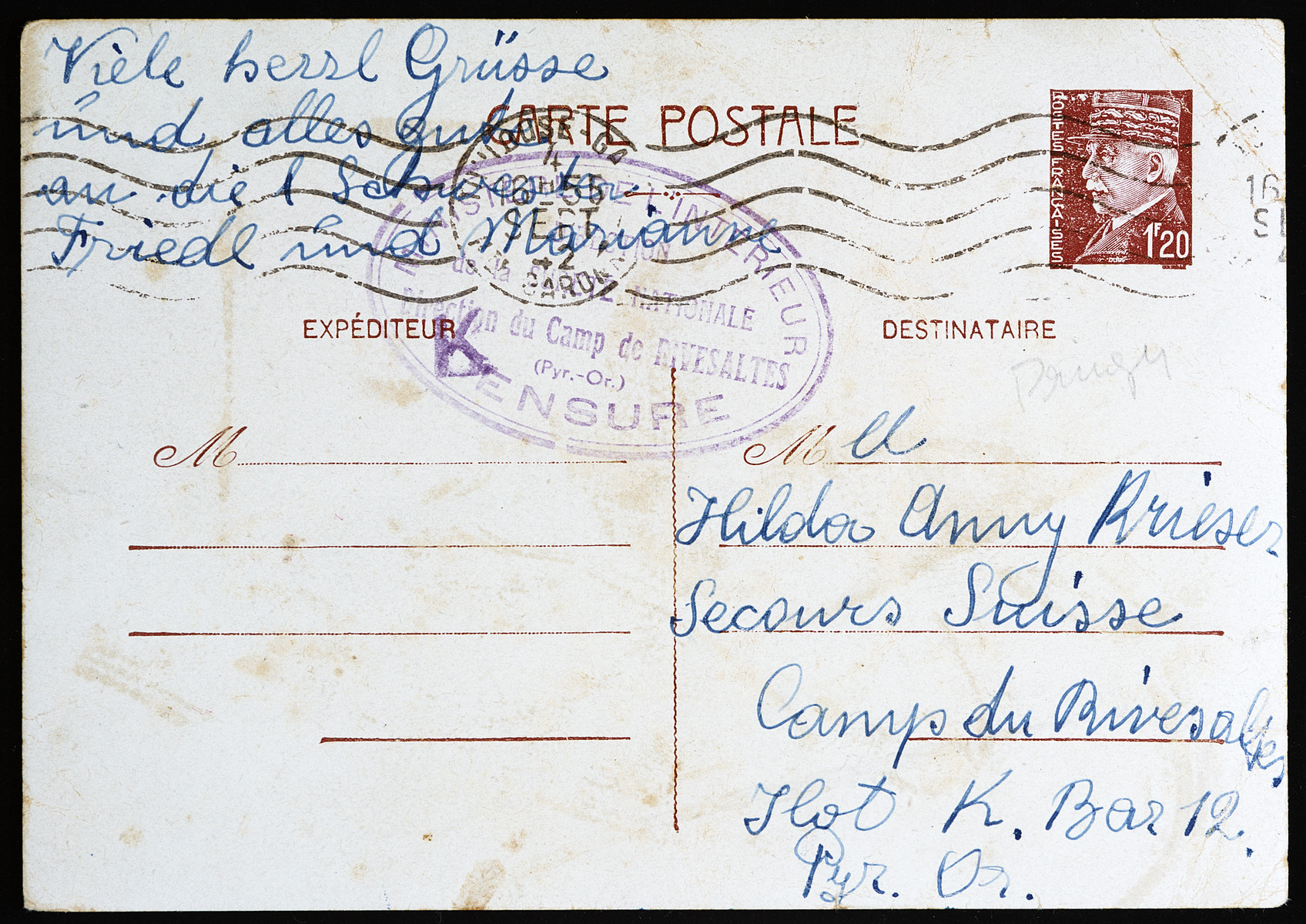 Postcard send from Perla Krieser from a deportation train to her two daughters in the Rivesaltes concentration camp. This is her final communication with her family before she was killed in Auschwitz.

The text of the postcard reads:

"My dearest loved ones,

Now we have just gone directly over Toulouse. It is 12 o'clock noon; unfortunately, we have no food to eat. You all can imagine what I am thinking. I am happy and satisfied that my loved ones are not here. I am curious when you will leave. In God's name, be brave and calm and [thanking] your loving sister Friedl's heart.

Many best wishes and hope everything is good from yours loving sisters Freidl and Marianne."

https://encyclopedia.ushmm.org/content/en/article/france.
Biography
Hilda Tayar (born Hilda Krieser) is the daughter of Shlomo Krieser and Perla Katz Krieser. She was born in Koln, Germany on March 14, 1924. Shlomo was born in Oswiecim (Auschwitz) on January 5, 1896, and Perla was born on June 15, 1899 in the small town of Sborov, near Lvov. The family immigrated to Antwerp, Belgium when Hilda was a baby, and her younger sister Anny was born there on September 4, 1929. The girls' parents worked together in the clothing business. Perla worked as a seamstress making the clothes that Shlomo sold. The family was quite religious and belonged to the movement "Tnua Tikvatenu." On May 10, 1940, Germany invaded Belgium, and three days later, the family escaped by train to France enduring bombardments and interminable stops. They arrived finally in Toulouse and from there were sent by French authorities to a village in Tarn et Garrone. After learning their relatives were in Luchon, the family decided to join them. Their happiness was short lived. Soon afterwards, the French police arrested them and sent them first to Agde and from there to the Rivesaltes internment camp. Conditions there were terrible. The barracks were cold in the winter and hot in the summer, and the family did not have appropriate clothing or adequate food. Hilda eventually noticed that the Secours Suisse operated a home for small children in the camp. She approached the director, Elsa Ruth, to ask for work, in order to find useful activity and receive better food. Mlle Elsa later arranged for Hilda and Anny to transfer to Pringy, a Secours Suisse children's home in Haute Savoie run by Ruth von de Wild. The sisters arrived in Pringy in November 1941 and remained there for almost year, until August 1942 when French policemen ordered them to return to Rivesaltes to "reunite" with their family prior to deportation. When the girl's mother learned that they were on the deportation list, she ran immediately to the Red Cross hut to see Friedel Reiter. Friedel went to the director of the camp who called Maurice Dubois, director of the Swiss Red Cross in France hoping to get them out. However, since they already were on the list, they could only officially be taken off if two other girls went in their place which they were unwilling to do. Instead, the commandant of Rivesaltes told them to run away as they were waiting in the line for the cattle cars. Friedel Reiter then hid them in a storage hut until the transport left. Freidel also brought other small children to this hut and told Hilda and Anny to watch them so they wouldn't cry. They remained there for three days. Then, with the help of the Red Cross and Andree Salomon, they returned to Pringy where they remained hidden among Christian children until after liberation. Hilda helped care for fifteen children using the false name of Helene Rambaux, and Anny kept her own name.