Couples in the Landsberg DP camp dance in a large public hall. 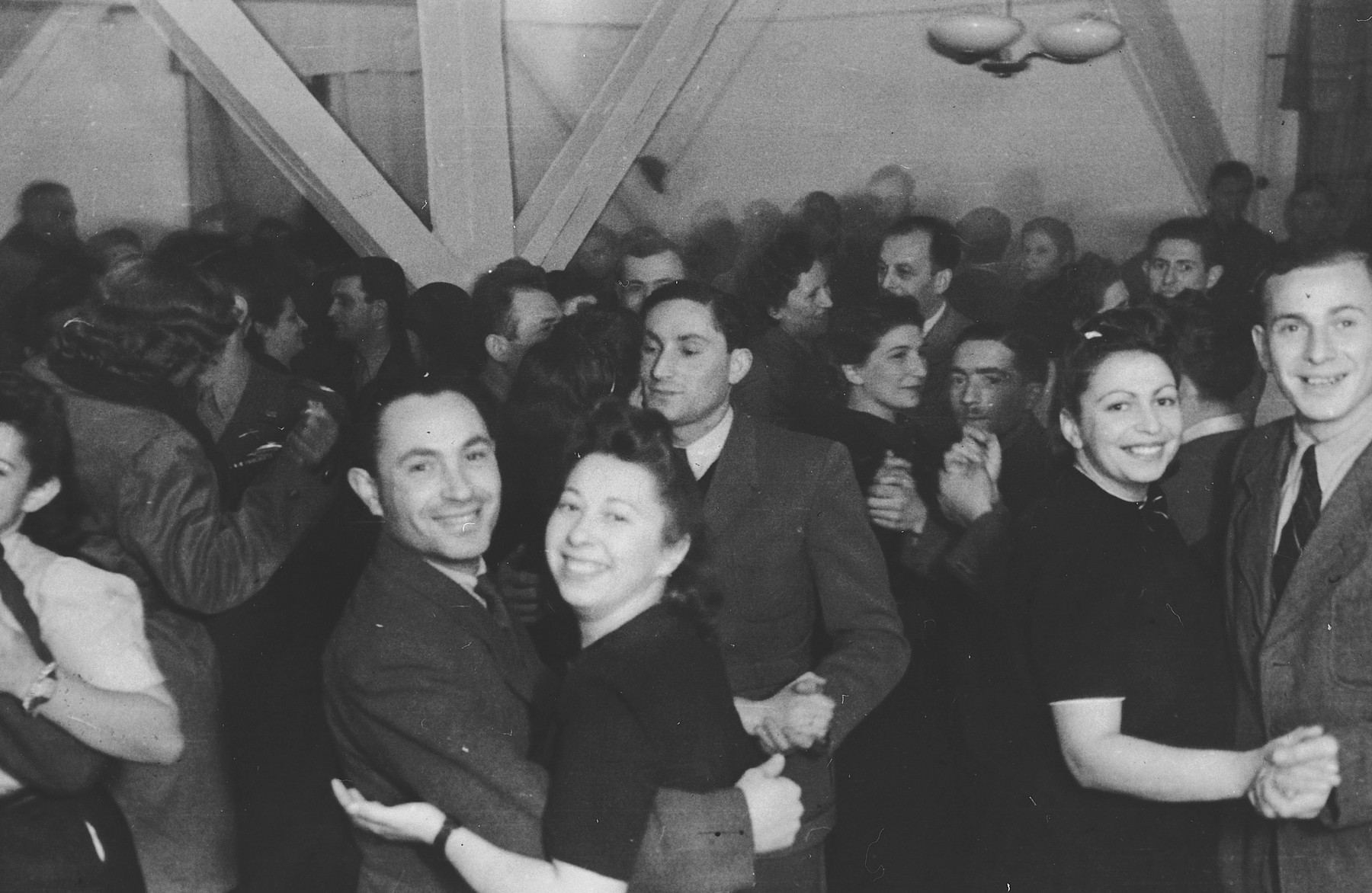 Couples in the Landsberg DP camp dance in a large public hall.

Biography
Rita Hattem (born Rita Friedman) is the daughter of Izaac (Isaac) and Rachel Friedman. Izaak Friedman was the son of Max and Rifka Friedman. He was born in Lodz, Poland on June 7, 1914 where his father, Max (b. 8/8/1887) worked as a jeweler. His mother died before the war when Izaac was still a child. His father later remarried, and Izaak had one half-brother, Szmuel, who was born in 1939 and who perished in Auschwitz at the age of five. The family was not religious but was involved in Jewish political organizations. Izaak attended yeshiva, public school, gymnasium and accounting school. He also worked as a photographer's apprentice. He served in the Polish Army from 1936 to 1938. After the start of World War II, he was remobilized in 1939, captured as a POW after Poland's surrender and released on February 27, 1940. Meanwhile, all the Jews of Lodz had been forced to move into a ghetto a few weeks before. Shortly after returning to Lodz, he married Rachel Mandelman (b. July 17, 1917) on March 11, 1940, and the young couple lived in the ghetto for the next four years. Izaac worked in the fuel department, and Rachel worked in a uniform factory. In August 1944 the Germans liquidated the ghetto. On August 25, 1944 Izaak was deported to Auschwitz and eleven days later was transferred to work in the truck factory Buessing Werke in Voecheld near Braunschweig. He worked there as a lathe operator until his liberation by the American army on May 2, 1945. Rachel also only remained in Auschwitz for few days before being sent elsewhere to work in a war equipment factory and then taken to Theresienstadt. She was liberated from Theresienstadt on May 8, 1945. Izaac's father, step-mother and half-brother also were deported to Auschwitz in August 1944. Max Freidman survived the war together with his son. His wife Pola and five-year-old son Szmuel were killed upon arrival. After liberation, Izaak returned to Lodz and recovered several photos that he had hidden in the basement of his apartment building. He reunited with his father and an uncle. After learning that Rachel had survived, he left for Czechoslovakia to meet her in Theresienstadt one week after returning home. The family then went to the Landsberg displaced persons camp in Germany initially hoping to go from there to Palestine. They remained in Landsberg for the next three years. Izaak worked in a clothing warehouse as an issue clerk, bookkeeper and manager. On August 25, 1948 Rachel gave birth to a daughter Ruth. Max ended up remarrying. On March 17, 1949 the Friedman family immigrated to the United States on board a military ship, the General Han.