A painting by artist Sophia Kalski depicting the aktion in Lwow on the 5th and 6th of January, 1943. 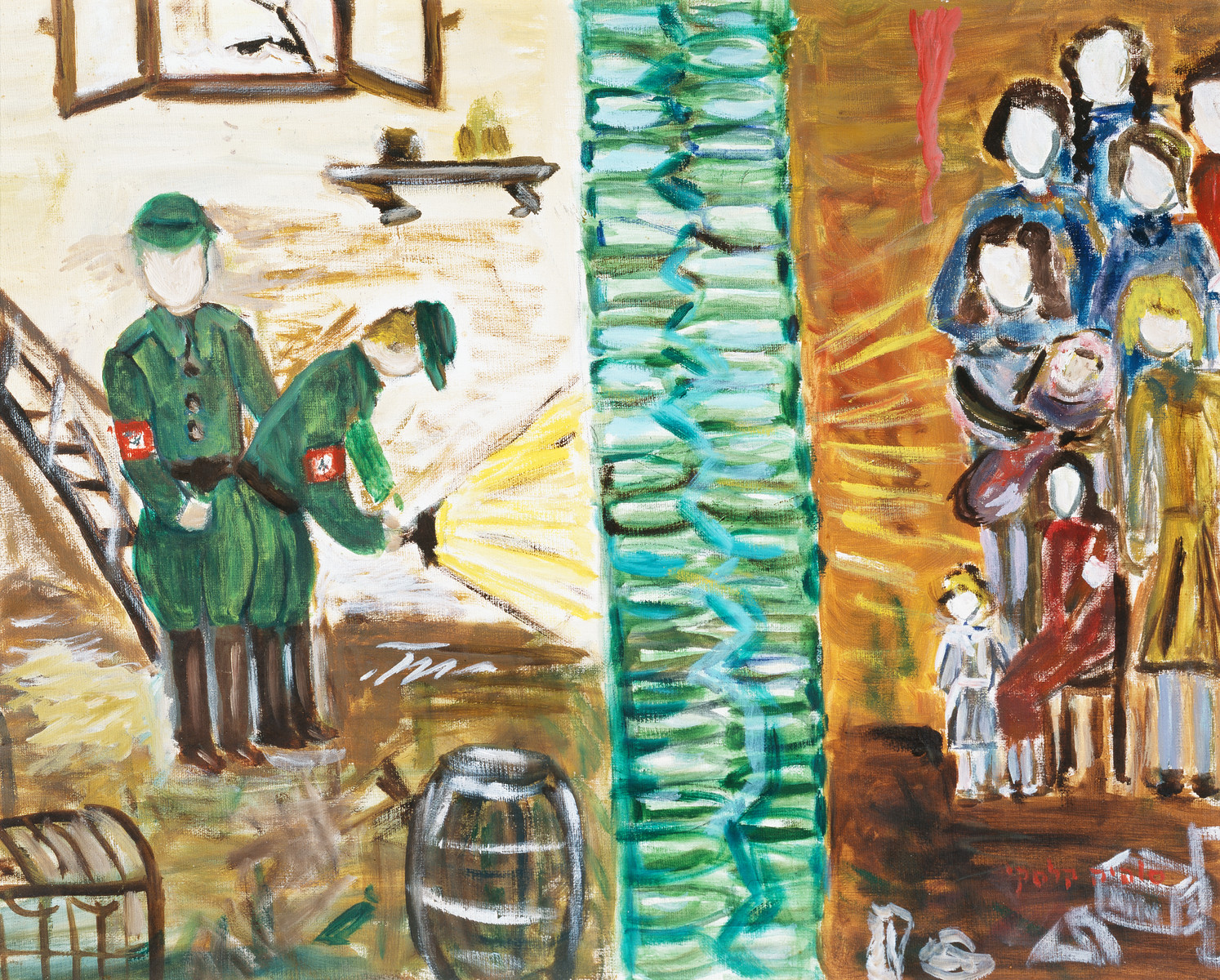 A painting by artist Sophia Kalski depicting the aktion in Lwow on the 5th and 6th of January, 1943.

The artist writes "I am hiding in a bunker (basement) among strangers without my parents. The bunker is divided into two parts and the dividing wall is made of thick green bottles. The flashlight that the Germans are holding while they are searching for Jews in the bunker brings terrible fright on me and it seems to me that they will discover in a moment and they will take me away to shoot me, and I have no one to trust and to rely on to take me out of this and to give me some reassurances."

Biography
Sophia Kalski (born Sofia Zosia Korpoltz) is the daughter of Nachum and Sidonia (nee Stern) Korpoltz. She was born on January 1, 1933 in Trembowla, Poland (near Tarnopol), where her father was a radio technician. After the German invasion of Poland in September 1939, Trembowla came under Soviet occupation for a year and a half. Then, in June 1941 Germany launched an attack on the Soviet Union, and the town was occupied by the Germans. A ghetto in Trembowla was established in September 1942. Nachum Korppltz managed to escape to Lvov, while Zosia stayed in her grandfather's house. Her father then found a hiding place for Zosia, since she was blond and did not look Jewish. However, her rescuers became afraid and decided they could not keep her. Zosia was forced to return to the Lvov ghetto, which at that point was still open. In the fall of 1942 the Lvov ghetto was hermetically sealed. Zosia was then nine and a half years old. During one of the deportations to the Belzec death camp, Zosia hid for two days in a building on Zamarstynowska Street. A few months later, Zosia's father, Nachum Natan Korpoltz, contracted typhus and was taken to a hospital where he died at the end of January 1943. During the following deportation Aktion, Zosia hid all by herself. She stayed in the ghetto until the end of March 1943, when she managed to escape through a hole in the fence surrounding the ghetto. She managed to reach Trembowla where she was smuggled into the ghetto and remained there for about three months. In May 1943 Zosia and her mother Sidonia managed to reach the house in Humnyska village (Umniska), about 10 km. west of Trembowla. They were helped by Anna and Wojtek Gutonski. Zosia and her mother stayed with them for about eight months; they were hidden in a hole in the ground until their liberation by the Soviet Army. Yad Vashem later honored Paulina Koblenko, the daughter of Anna and Wojtek Gutonski, as Righteous Among the Nations.