Regina Ptasznik Grajcer holds her newborn daughter Miriam while her family and a nurse stand behind her. 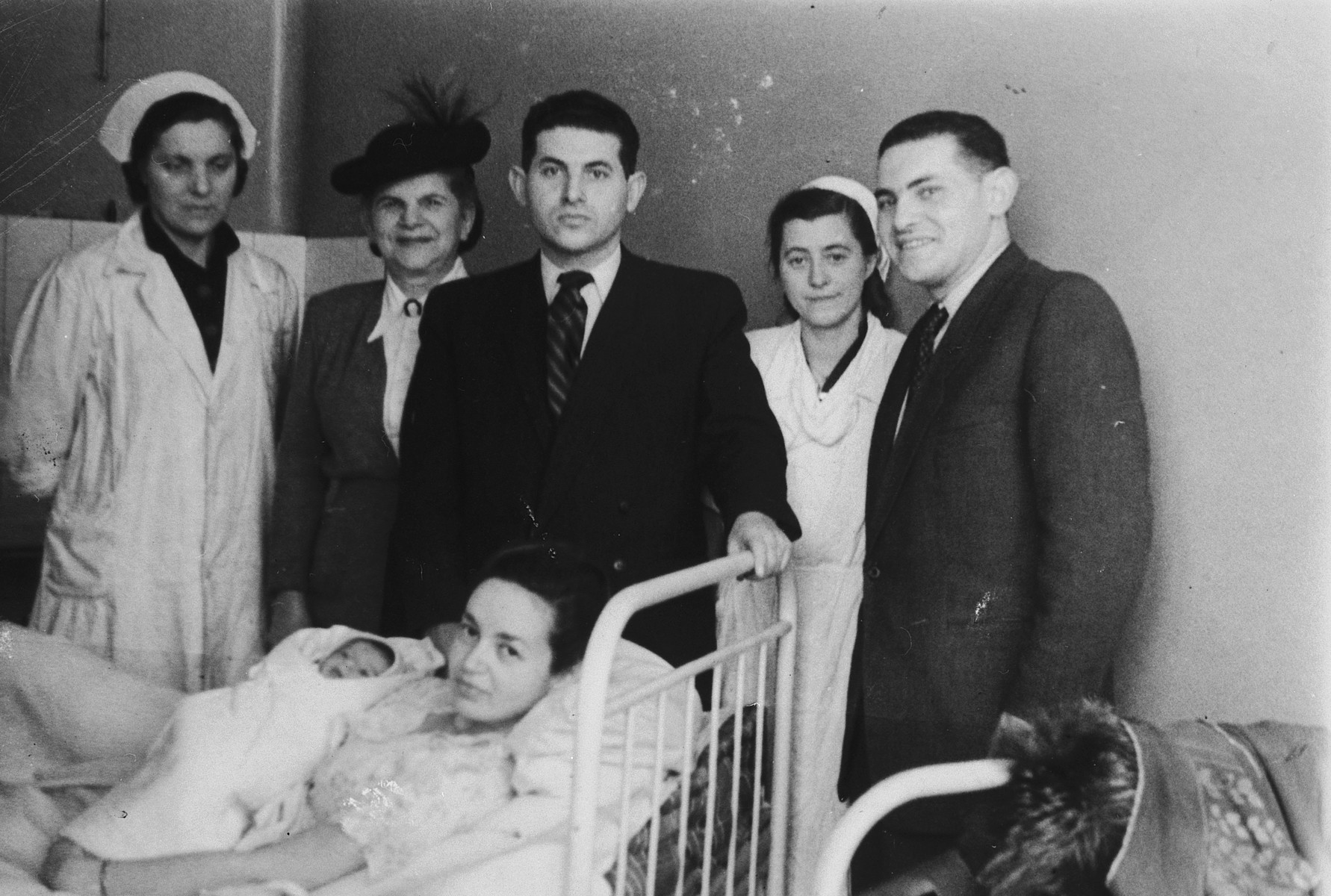 Regina Ptasznik Grajcer holds her newborn daughter Miriam while her family and a nurse stand behind her.

Behind her is her husband Itzchak Grajcer. His twin brother Solomon is standing on the far right.

Biography
Regina Ptasznik is the daughter of Joel Ptasznik (b. 1895) and Szprinca (Sophie) Kugelman Ptasznik (b. 1897). She was born on July 30, 1921 in Bedzin Poland and grew up in the neighboring town of Sosnowiec, where her parents owned and operated a shoe store. Regina had an older brother Moses (b. 1919), and two younger brothers Wolf (William, b. May 1924) and Jozek (b. May 1926). The family was religious; they kept kosher and observed the Sabbath. Regina attended a private Jewish gymnasium. Regina's father died of natural cause in 1935 when she was 12 years-old. In 1942 Regina's family was sent to the Sosnowiec ghetto. Regina first worked in a factory manufacturing rucksacks; she later worked as a bookkeeper in the German labor office. Her brothers were conscripted to built roads and work in ghetto stockrooms. In 1943 Regina's family was sent to Annaberg. Regina continued to do office work while her brothers made shoes, and her mother worked in a kitchen. Later that year, Regina and her mother were deported to Auschwitz. From there they were sent to Ravensbrueck and Beendorf where Regina worked in the salt mines and on the machinery for the German V1/V2 rockets. She and her mother were then sent to Wandsbek near Hamburg where they were picked up by the Swedish Red Cross, as part of the Count Folke Bernadotte rescue mission and brought to Sweden. Regina's older brother Moses died in Landsberg in 1945. Her two younger brothers, Wolf and Jozek both survived the war. Regina returned to Poland in 1947, married Itzchak Grajcer in Sosnowiec and the following year gave birth to a daughter, Miriam. In 1949 Regina immigrated to Israel and later moved to the United States.