Group portrait of French soldiers shortly after the German invasion. 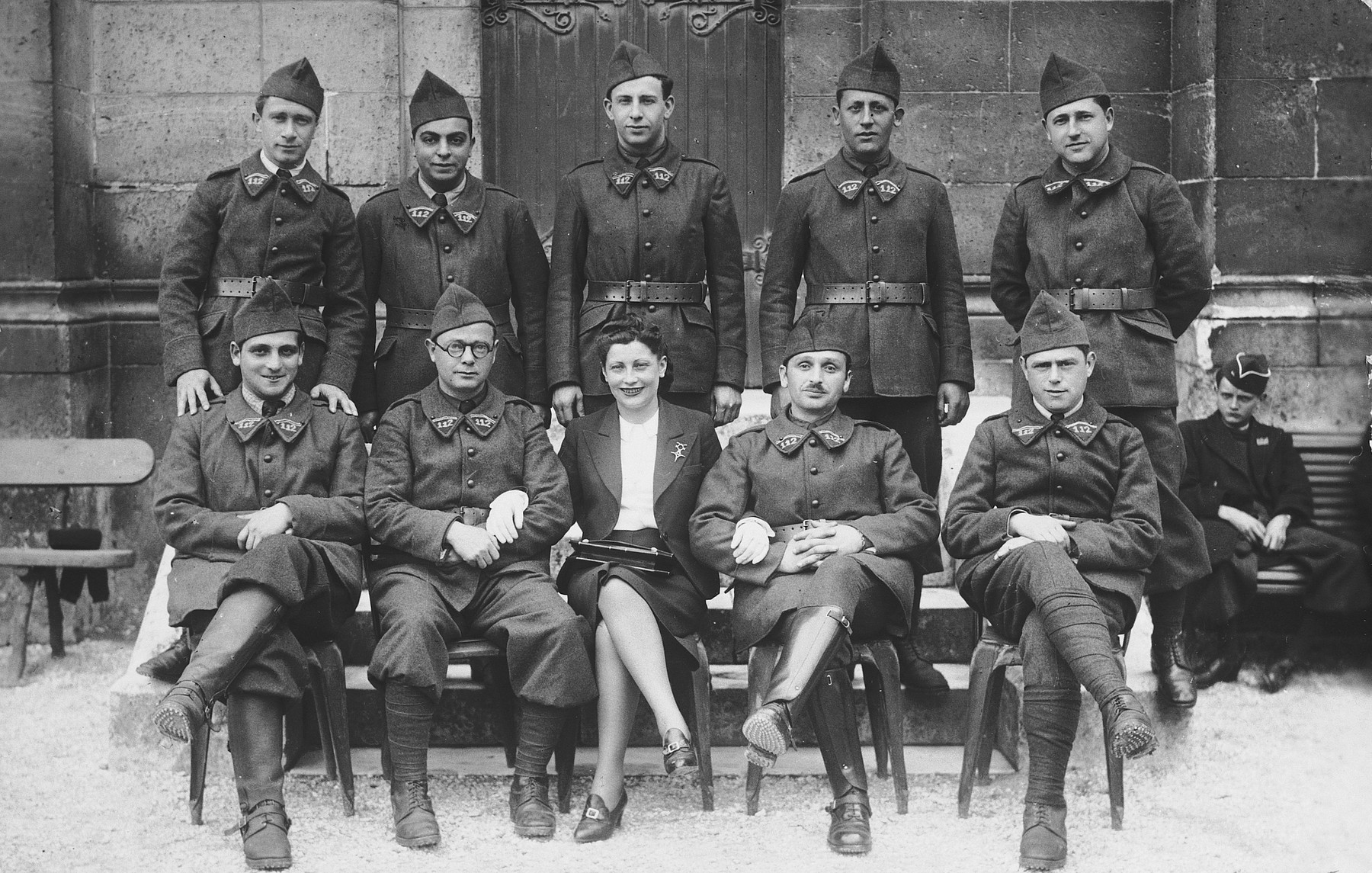 Group portrait of French soldiers shortly after the German invasion.

Among those pictured is Mattieu Findling (first row, far right), a foreign born Jew in the French army.

Biography
Raymonde Garber (born Raymonde Findling) is the daughter of Matthew (Mattieu) and Sabina (Sprincza) Findling. Her father was born on September 12, 1902 in Krinky, near Bialystok, and her mother was born on August 20, 1906 in Tarnow, Poland. Both her parents immigrated to Strasbourg France, where their children were born. Sabina's parents and sister also had immigrated to France. Raymonde was born on October 28, 1936, and her younger brother was on born July 1, 1938. After the German invasion of France in 1940, Matthew was mobilized into the French army even though he officially was not yet a citizen. Sabina fled south to Limoges along with her two children, father, sister and brother-in-law. After the army was demobilized, she reunited with Matthew. In November 1940, they put their two children in the Pouponniere OSE children's home. Sabina used false papers, but Matthew kept his given name. By April 1942, the situation became increasingly dangerous, and police began actively searching for Jews. Sabina removed her children from the Pouponniere, but they couldn't remain with her as she only had the use of a small attic room. Instead they went to live with a Christian couple in Limoges and remained there until September. Then the siblings were separated; her brother was sent to the Gautier family in a village near Limoges where he remained until the end of the war. Raymonde was sent to a farm of the Cahiers family in the Dordogne. Monique, another Jewish child, eventually stayed there as well and provided companionship for Raymonde. The farmers, who had no children of their own, were quite nice. They were not religious and perhaps were Communists. Mrs. Cahiers belonged to the resistance. Raymonde, now six years old, started school. When the weather permitted, she walked about 5 kilometers to school in wooden shoes (sabots), changing to slippers inside which were kept at school. They had small individual blackboards but very few books. One day in 1943, Raymonde arrived at school to discover that the children were not allowed to enter. The underground, who was very active in this area, had hanged the teacher for collaboration. Germans frequently searched the Cahiers farm, and Mrs. Cahiers helped Raymonde to hide. At the end of 1943 Mrs. Cahiers became quite worried about the situation and asked the girls to leave. Sabina brought Raymonde to live with an aunt in St. Leonard de Noblat, where a number of other Jews were hiding. From there she was sent with the help of her uncle who was active in OSE to another place where she was extremely unhappy and always hungry. She had to wash floors and collect food for the rabbits. After approximately half a year her mother visited her and discovered the truth of her situation. As this was already April 1944 Sabina brought her back to Limoges, where her father and grandfather were living. (Sabina's father, who was quite religious, had refused to shave his beard and was picked up by the Milice in 1943. After the family had not heard from him for a year, he returned in 1944, and they learned that the underground had helped him hide on a farm.) At the end of the war Raymonde's parents went to get her brother. He did not want to leave his adopted family, but eventually joined them. Raymonde returned to school in September, 1944. Eventually she moved to Paris where her father was living; her brother remained in Limoges. Her grandfather immigrated to Palestine. After Sabina's death in 1959, Raymonde also immigrated to Israel.