Group portrait of survivors of a Kaufering sub-camp one month after liberation. 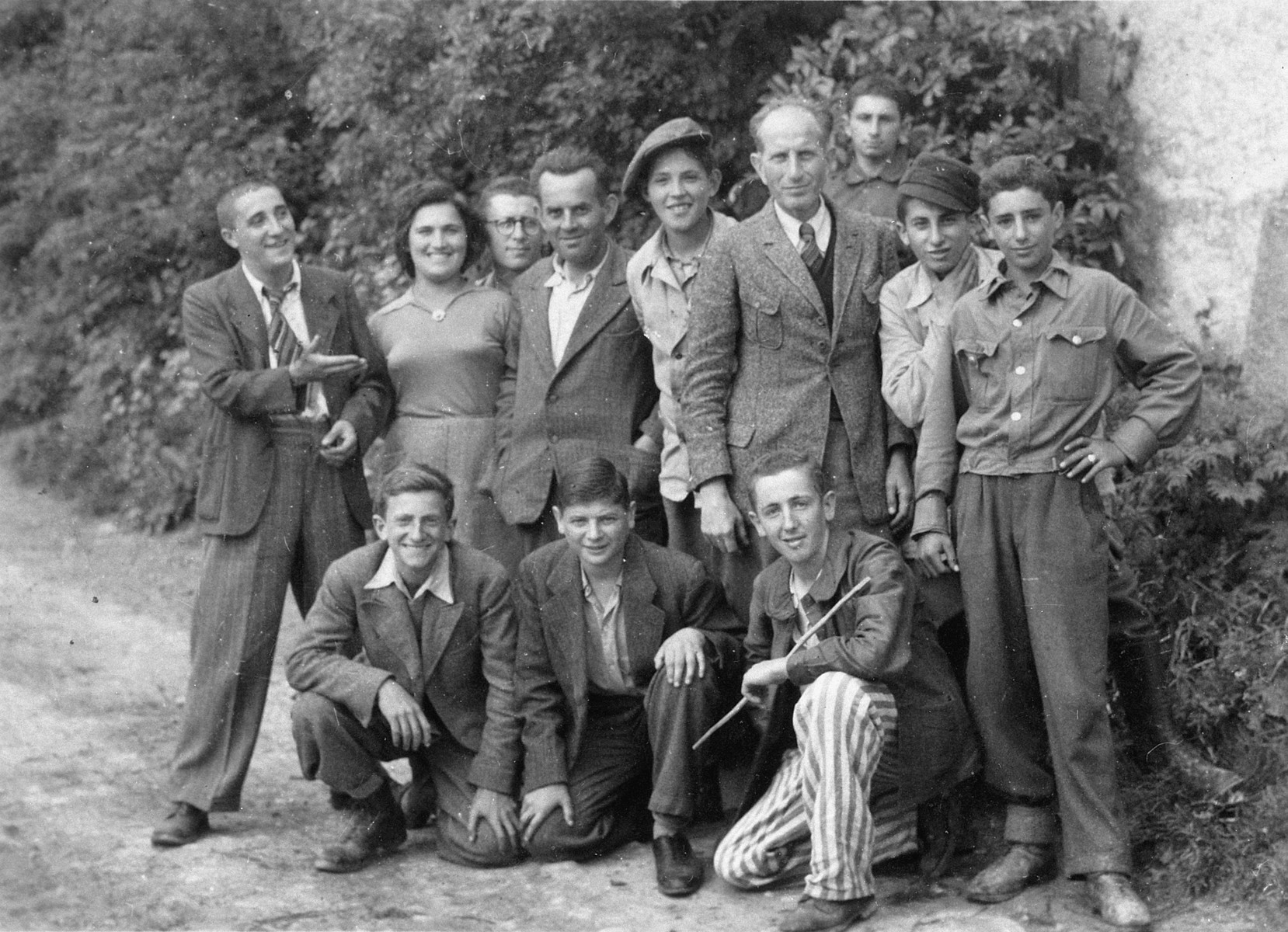 Group portrait of survivors of a Kaufering sub-camp one month after liberation.

Among those pictured are Uriel Hanoch (standing fifth from the left).

Biography
Uriel (Uri) Hanoch is the son of Shraga (Feivel) Hanoch (b. August 5, 1885 in Trakai) and Frieda nee Ipp Hanoch (b. 1905). Uriel was born on March 28, 1928 in Kovno where his father Shraga, one of the few Sephardic Jews in Kovno, managed the NUR factory that manufactured wooden matches. Uri had an older sister, Miriam born on December 31, 1922, and a younger brother Daniel (Danny) born on February 2, 1932. His family kept kosher and observed the holidays but rode on the Sabbath. He attended the Schwabe Hebrew Gymnasium, starting in kindergarten in 1933. On June 15, 1940 after the Russians occupied Lithuania, his sister had to quit university to work as a secretary in a factory. The Soviets also forbade Hebrew eduction and closed the Zionist Schwabe School. Uri attended a Soviet summer camp in Palanga and was there when the war broke out the following year. On June 22, 1941 German troops entered Kovno. Uri was held in the synagogue in Palanga with the other Jewish children and women. The men were taken out and executed. For the next two weeks, Uri was forced to participate in the burning of Torah scrolls and other Jewish books. The following week, all of the children were returned to Kovno on Red Cross buses. Vinci, the Hanoch's maid, came to meet Uri. Before the war, Uri's mother had helped her with the birth and care of her daughter. Once the war broke out and Lithuanian mobs came searching for Jews, Vinci protected the family by hiding them and telling the partisans that the family had already died. Vinci wanted to hide Daniel with her in her village, but Frieda would not part with him. Instead the entire family entered the ghetto in August 1941. Vinci helped them move with a horse and carriage. The Hanochs received a small room in the ghetto and shared a bathroom with five other families. Uri's parents worked constructing an airport outside of the city. Uri's sister also worked. Luckily the family survived the initial Aktions in the ghetto that killed about a third of the Jewish population. Uri decided he also needed a job and became a messenger in the ghetto. Frieda frequently removed her Jewish star when she went into town so she could barter diamonds and other jewelry for food. On one occasion she was caught, arrested and sent to the Ninth Fort. Uri went to the head of the German Labor Office, SA Lieutenant Gustav Herman and pleaded for her release. Herman was one of the more humane Germans working at the ghetto, and after ten days he sent a car and brought Frieda back to the ghetto. Later the ghetto underground approached Uri, who belonged to the Zionist Betar movement, and asked for his assistance in obtaining a stamp from the SS in order to forge papers to help others escape to the woods to join the partisans. For two and a half years, the Hanochs remained in the ghetto experiencing hardship, deprivation but relative calm. Then, on March 28, 1944 Germans and Ukrainians surrounded the ghetto and began searching for children and elderly. Uri and Danny hid in an attic but were eventually spotted during the house-to-house searches. Danny managed to run away. Though he was shot at, he escaped out of a back door. After Uri left his own hiding place to try to find out what had happened to his brother, he himself was caught. The Germans beat Uri to try to get information, but they left after he fainted. In early July 1944 the Germans liquidated the ghetto. After a three-day train ride, Uri's mother and sister along with all the women arrived at Stutthof where theysubsequently perished. Uri, Daniel and his father were sent to Kaufering, a sub-camp of Dachau. From there, after approximately two weeks, Daniel was deported to Auschwitz. Uri and his father were put to work at the Messerschmitt plant where conditions were extremely horrific. Within ten months, approximately half the work-force perished. Shraga Feivel became a broken man, and on October 25, 1944 he was deported to Auschwitz where he perished. As the war wound down, Uri was sent on a death march and then by train to Dachau. However, the Allies bombed the train near Schwabhausen, and Uri and many others managed to escape. Uri eventually reunited with his brother, the only member of his immediate family to survive. After liberation, Uri went to Italy where he met members of the Jewish Brigade. They arranged for him to receive a certificate to Palestine, and he eventually settled in Kfar Shmaryahu.