Moise Ginzburg stands next to the grave of his father and uncle, Binyamin and Shlomo Ginzburg, who were killed by bandits on a highway. 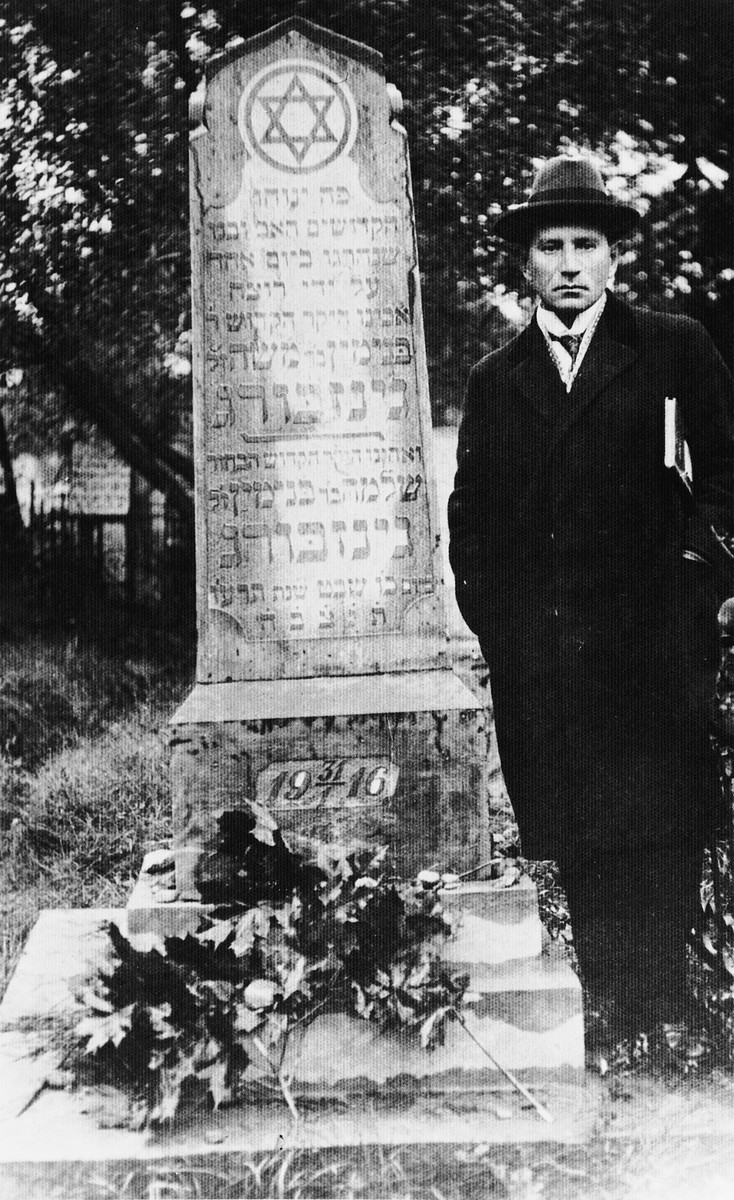 Moise Ginzburg stands next to the grave of his father and uncle, Binyamin and Shlomo Ginzburg, who were killed by bandits on a highway.

Biography
Tema de Ratafia (born Ginzburg) is the daughter of Moise Ginzburg and Rachel Rubenstein Ginzburg. She was born on November 6, 1925 in Vilna where her father was a coal and wood merchant, and her mother was a teacher. She had an older brother Benjamin and a twin sister Eta. Tema's family was not religiously observant; she grew up speaking Russian and Polish. However, Tema's father wanted his children to attend the Jewish gymnasium in Vilna, and Tema learned Yiddish in school. Her father bartered fuel for tuition. During the interwar years life became difficult for Jews in Vilna. They were no longer allowed to be professionals, and Moise's business suffered tremendously. He had difficulty paying property taxes on his business, and an aunt had to help him financially. In 1940, the Soviet Union annexed Lithuania and almost exactly one year later, in June 1941, Germany invaded the Soviet Union. Shortly after the occupation, the Germans began issuing anti-Jewish decrees. By the end of August 1941, some 35,000 Jews had been rounded up and shot in the nearby Ponary forest. Among them were Tema's grandmother and uncle. On September 6, 1941, the Germans established two ghettos in Vilna. Tema and her family were placed in the larger ghetto, which was fortuitous because in mid-October the Germans liquidated the smaller ghetto and massacred its inhabitants in Ponary. An aunt and uncle of Tema's fled the ghetto for their hometown only to be denounced by their former maid and killed. Tema's father received a work permit, but her mother did not. To assist the family Tema and her siblings found work within the ghetto, including cleaning the latrines. Though most of the Germans were quite brutal, one named Otto treated her well and sometimes gave her extra food. After the initial killing Aktions, life quieted down in the ghetto, and the Ginzburg family lived in relative calm from the spring of 1942 to the spring of 1943. However, during the summer of 1943 the Germans began deporting Jews to Estonia and other concentration camps and completed the liquidation of the ghetto by the end of September 1943. Children, the elderly, and the sick were sent to the Sobibor extermination camp or were shot at Ponary. The surviving men were sent to labor camps in Estonia while the women were sent to labor camps in Latvia. During the liquidation, Tema and her friend Esther fled to the home of an acquaintance of her mother. Tema's mother knew that this Polish woman born in Kovno, Josefa Mackiewicz, would be willing to hide one child, and because Tema was blond and fairly Aryan-looking she sent her. Esther could not come with her to Josefa's house, but Tema could not bear to leave her behind so they left together and lived in the woods for a few days. The forest supervisor caught them and shot and killed Esther, but Tema managed to escape and return to Josefa's home. After a few weeks, an antisemitic neighbor discovered Tema and threatened to denounce Josefa. Both women fled to the home of Joseph Raugiewicz, a factory owner in Kalisz. Joseph provided Tema with false Christian papers claiming her name was Leocadia Rynkiewich, and Josefa had her baptized with the name Teresa. Some time later, the Gestapo arrested Joseph for harboring Jews, but his friend Piotr Piewcewicz warned Tema in time for her to escape. After a few weeks, the Gestapo released Joseph, and Tema returned to his home. Joseph sent Tema back to Josefa who at that time was also harboring a teacher, a lawyer, and a doctor, but he helped the women out financially. Josefa sheltered Tema until liberation. After the war, Tema moved to Warsaw where she met her husband. However, Tema insisted that Josefa live with them, in gratitude for having saved her. Josefa stayed with them for the next ten years. Tema also stayed in touch with Joseph and Piotr who became good friends of her husband. Though she survived, Tema learned that her mother and brother had been sent to Estonia and to Stutthof where they were killed. Her father was murdered at Chelmno. In 1953 an acquaintaince of Tema's told her that she had met someone who looked just like her. In that way, Tema discovered that her twin sister Eta had survived and immigrated to the United States. In 1957 Tema moved to the United Sates to live with Eta. Her husband and children joined her two years later.