Identification card issued to Elek Rebensztok by the Central Council of Jewish Congregations of Poland and stamped by British immigration authorities allowing him to provisionally enter the country under the orphans' quota. 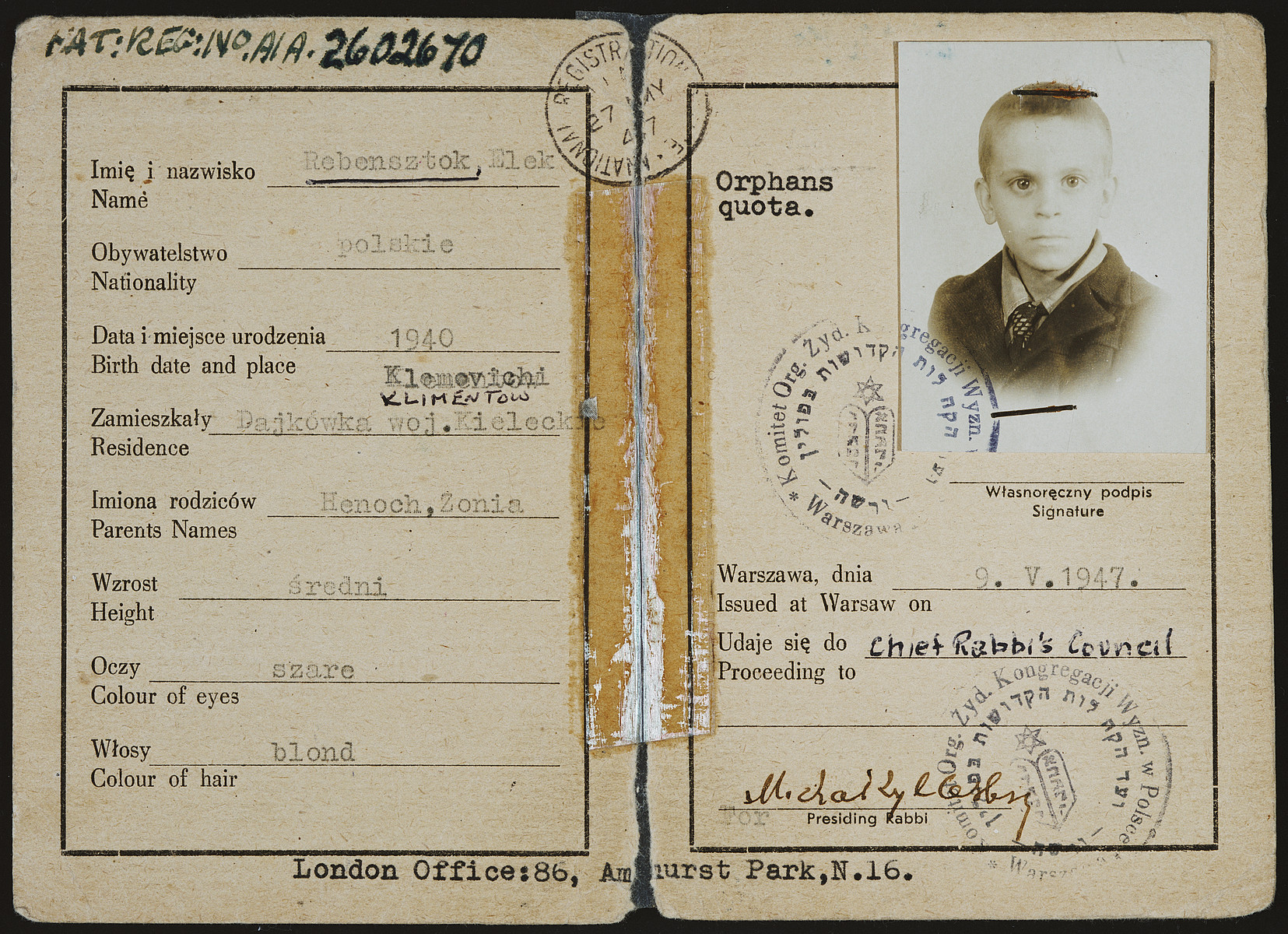 Identification card issued to Elek Rebensztok by the Central Council of Jewish Congregations of Poland and stamped by British immigration authorities allowing him to provisionally enter the country under the orphans' quota.

The conditions listed on the back side read, "The holder is permitted to land at Leith subject to the following condition namely that he/she registers at once with the police on attaining the age of sixteen years, that he/she does not enter any employment without consent of the Ministry of Labour and National Services and that he/she emigrate from the United Kingdom at the earliest opportunity.

Biography
Alex Rosin (born Elek Rebensztok) is the son of Stanislaw Israel Rebensztok and Bronislawa Kubanska Rebensztok. He was born on December 31, 1941 in the small village of Klimentov near Sosnowiec. Elek had two older sisters: Morisha Rebecca was approximately six years older, and Stanislawa Basha was four years older. Bronislawa died of typhus shortly after giving birth to Elek leaving her husband to raise three young children. In late 1942 Elek's father realized he stood very little chance of surviving the Holocaust but that he might be able to save his children. He brought his children to an impoverished woman, Boyka Katarzina who was living alone with her young son in the rural village of Dandowska. Her son, Zbigniew (Zbishoo), was almost exactly the same age as Elek. Stanislaw Israel gave the woman most of his savings in exchange for taking the children. He told her that if he survived the war, he would return to reclaim the children. Otherwise, he had made provision for a Jewish organization to find them after liberation. Soon afterwards, Morisha became ill and passed away at the age of 8. Boyka, who could not afford to support all three children, gave Stanislawa to a Catholic couple who later adopted her. Boyka had no money to buy the boys either shoes or socks. The boys could not attend any school and only had bread and water to eat. However, despite their abject poverty, Elek became extremely fond of Boyka and Zbishoo who he considered to be his real family. Since Boyka had to work in the coal mines during the day, Zbishoo and Elek kept themselves company. Their village was frequently bombed, and during a raid the boys took shelter in the village bomb cellar. One day, a bomb fell on the cellar killing many inside. Despite their young ages, Elek and Zbishoo had to remove the rubble to free two elderly women. On another occasion, some Nazi police came to Boyka's home searching for Jewish children. After Boyka insisted that she was the mother of both boys, the Nazis made the two boys undress to see if they were circumcised. Luckily Elek's father deliberately did not have him circumcised because of the inherent dangers, and so he was spared. After the war ended, Elek and Zbishoo did small chores for a neighboring farmer in exchange for food even though they were only 5 or 6 years old. A few years after liberation, a man wearing a suit approached the boys and asked them if they knew where Boyka Katarzina lived. They told him that she was their mother and directed him to their home. After he left, they asked Boyka what the man wanted, and she told them that it was nothing important. However, the man returned three weeks later. This time, after he left, Boyka told Elek he was not her son but was a Jewish boy whom she had hidden during the war. Elek also learned for the first time that he had older sisters, one of whom had died. Elek did not want to leave the Katarzinas. Boyka reassured him that she also did not want him to leave and that she loved him like her own son, but that she had promised his father he would return to the Jewish community after the war. The man returned a third time with his wife. Elek reluctantly went with Simha and Sonya Rotenfeld, an Orthodox Jewish couple who adopted him and introduced him to Jewish religion and customs. Together they immigrated to the United Kingdom under the sponsorship of the Chief Rabbi of London. As an adult, Elek discovered his sister Stanislawa Basha, who had survived the war and was living as a Catholic in Poland.