A young girl waters her garden in the Stuttgart displaced person's camp. 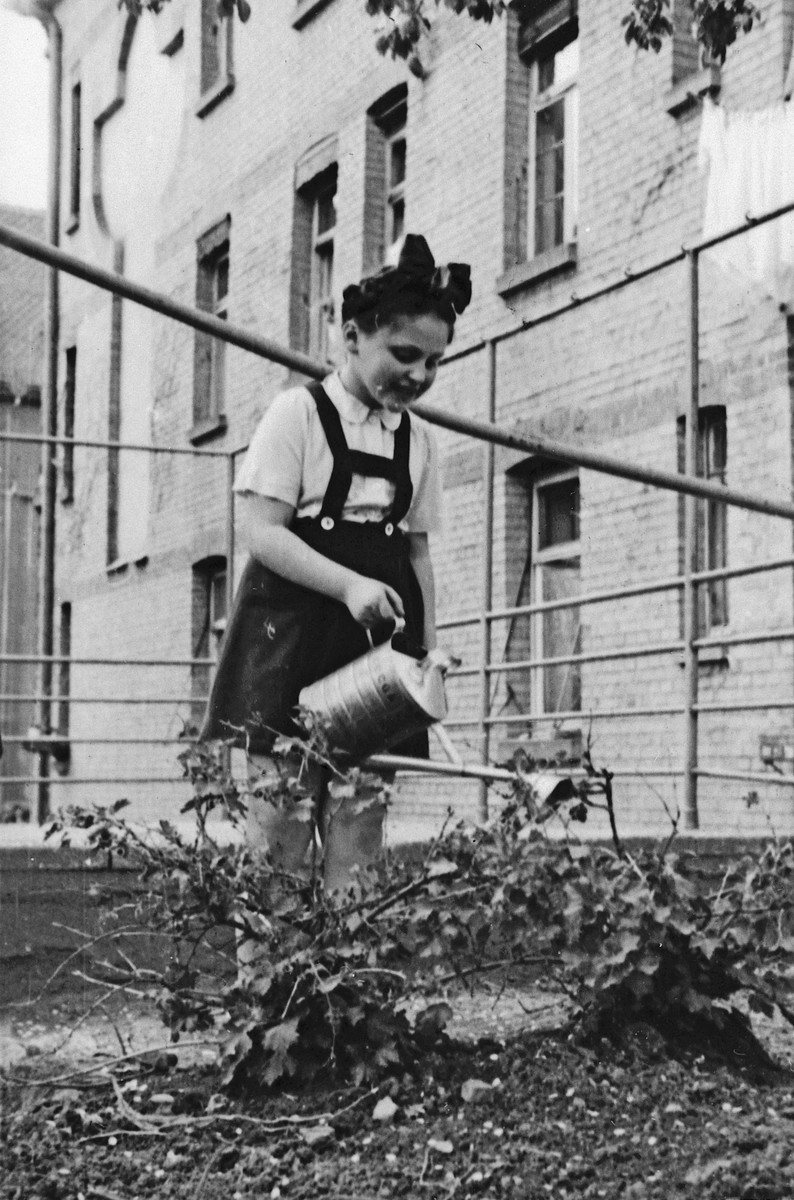 A young girl waters her garden in the Stuttgart displaced person's camp.

Biography
Hadassa (Dasia) Braun Kahane (now Dasia Black-Gutman) was born in Rzeszow, Poland in 1938, to Chana and Szulem Kahane. Szulem was a teacher of Jewish studies and Hebrew in the Jewish gymnasium in Rzeszow. Upon Hitler's invasion of Poland in September, 1939, the family escaped to Szulem's birthplace, Zbaraz in eastern Galicia, which was under Soviet occupation. Upon Nazi occupation of Galicia in June 1941, the family was confined in Zbaraz ghetto. As the frequency of the Aktias and deportations to killing camp of Belzec increased, Hadassa's parents smuggled her out of the ghetto and placed her in the care of a Polish woman living in Tarnopol, where she survived as an Aryan Catholic child. She was four years old at the time. In late June 1943, news reached her that both her parents had been killed. Till this day she does not know where or how or in which mass graves the life of her young parents ended. After the war, Hadassa was taken in by her father's cousin Gusta and her husband Welo Gassenbauer. They eventually were relocated from Zbaraz to Bytom, where her adopted father got a job as a lawyer. However, the pogrom in Kielce in July 1945, convinced Welo that they must get out of Poland. They escaped from southern Poland to Czechoslovakia via Moravska Ostrava. In Prague Hadassa and her uncle and aunt stayed for a while in transit camp of Hlubatin. With the help of the Bricha organisation, they managed to cross the border from Czechoslovakia to the American zone of West Germany. For the next 5 years they made their life in the Stuttgart displaced persons (DP) camp. The life of the camp was centred on Reinsburger strasse, where under the auspices of UNRRA an excellent Jewish day school, Bet Bialik was established. Hadassa, who by then was formally adopted by the Gassenbauers, flourished in the school, where Hebrew and Yiddish were taught by former professors as well as educated people like Welo. When State of Israel was established, the school got a young teacher from Israel, who taught Ivrit (Modern Hebrew) and inspired in Hadassa the love of Bialik's poetry. During the Gassenbauer's stay in Stuttgart, the number of Jewish children dwindled with most migrating out of Europe to the new world countries of US, Canada and Australia as well as Israel and the school was closed. Hadassa and her family left Germany in March 1951 for Sydney Australia, where she has lived since then. Hadassa attended Sydney University and became a university lecturer in Psychology and Education. Her main research focus has been the development of racial attitudes in children and the psychology of racism in general. She has worked extensively with Aboriginal people training for teaching within their communities. She now works as a counselling psychologist, with a special interest in impact of childhood trauma. Hadassa married, had two sons and five grandchildren.