Studio portrait of two Hungarian-Jewish boys and their Hungarian nanny. 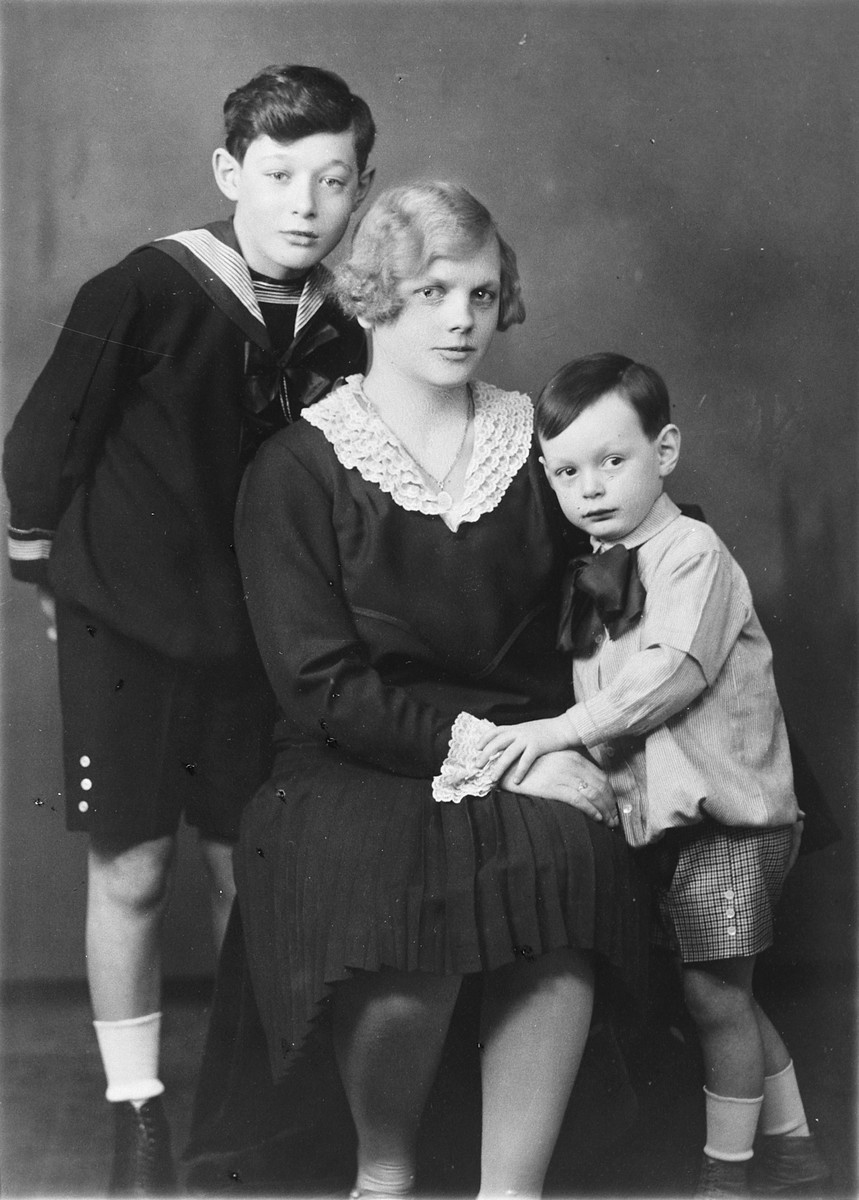 Studio portrait of two Hungarian-Jewish boys and their Hungarian nanny.

Pictured from left to right are Paul Fisch, Anna Tatrai and Robert Fisch. Anna Tatrai later rescued the boys' mother and was recognized as Righteous Among the Nations.

Biography
Robert Otto Fisch is the son of Zoltan Fisch (b. 2/4/1891) and Iren Manheim Fisch (b. 8/7/1893). He was born on June 12, 1925 in Budapest, Hungary where his parents were merchants. Robert had one older brother, Paul, who was born on April 20, 1919. The family employed a Catholic nanny, Anna Tatrai, who became like a second mother to the boys. Robert attended Friday night Jewish services with his family and Sunday mass with Anna. After Robert's graduation from Eotvos Joszef Gymnasium in Budapest, he was rejected from university because he was Jewish. Instead, he attended evening art classes. His brother had previously left Budapest to study mechanical engineering at University of Zurich in Switzerland. On March 19, 1944, Germany occupied Hungary and the lives of Budapest's Jewish community immediately changed. Soon afterwards they had to wear yellow stars, and in June Robert was conscripted to a work camp. Paul attempted to save his family from Switzerland and sent them Salvadoran citizenship papers.

There he was given such dangerous and physically demanding tasks as digging out unexploded bombs. Robert remained in the labor camp from June 4, 1944 to January 16, 1945. The prisoners were then forced to walk towards the Austrian border. A typhus epidemic broke out. Though Robert had a high fever he refused to be confined with the sick, saying he preferred to work. At one point a truck came to bring the sick to an "infirmary," but Robert declined this opportunity to be evacuated. This decision saved his life as the evacuees were taken to the edge of town and shot. The prisoners continued marching through the foothills of the Alps in the dead of winter. They went for days without food or water and had little clothing to protect them from the elements. When they arrived at the mountain pass, the guards randomly shot two out of every five prisoners. When one peasant woman tried to hand out apples to the prisoners, she was shot and killed. However, some guards performed surprising acts of kindness, such as secretly handing out extra food, when none of their comrades were watching. They eventually arrived in Mauthausen on April 4, 1944. They stayed there for ten days before resuming their march to Gunskirchen. Robert was at the Gunskirchen concentration camp from April 21 until he was liberated by American soldiers on May 4, at the age of 20.

He returned home to discover that his mother had survived, hidden by his former nanny Anna Tatrai and her family in Szekestchervar. However, Robert learned that after he left for forced labor, his father had also been taken away to a labor battalion. His mother kept her Salvadoran paper with her while in hiding for additional protection. His father always had shared his food with others, and as a result Zoltan Fisch perished from typhoid fever and starvation in Hidegseg, in Sopron, Hungary on December 18, 1944. After an eyewitness told Robert where his father was buried, Robert exhumed his grave and reburied him in the Jewish Memorial Cemetery for the Martyrs in Budapest. After the war Robert Fisch attended medical school in Budapest and then participated in the Hungarian Revolution in 1956. After its suppression, Robert immigrated to the United States and became a professor of pediatrics at the University of Minnesota. In 2001 Yad Vashem honored Anna Tatrai as Righteous among the Nations.