Two veiled women walk past a small shop on a street in Mostar. 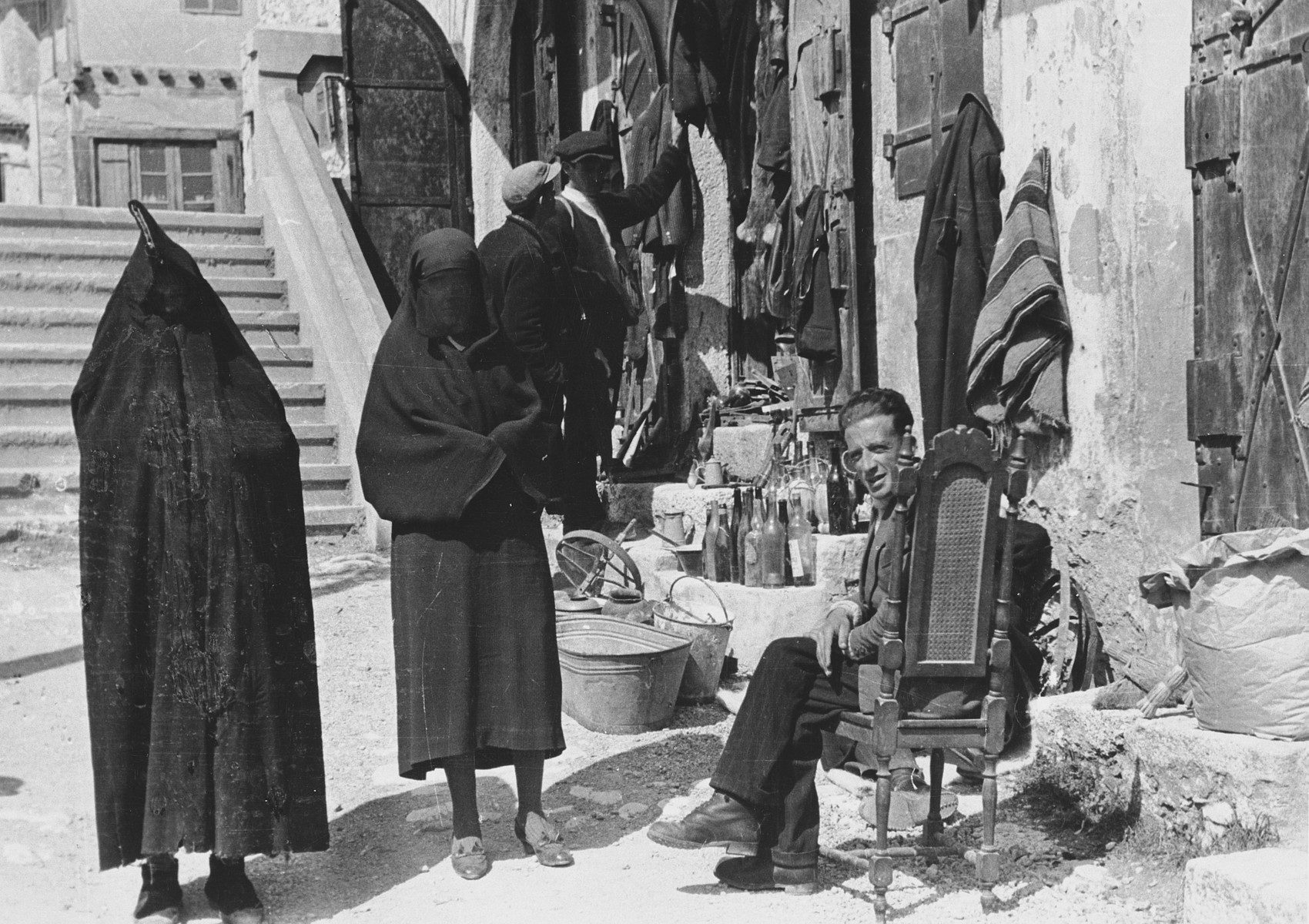 Two veiled women walk past a small shop on a street in Mostar.

One of a series of photographs taken by the 7th SS Volunteer Mountain Division Prinz Eugen in Croatia, Serbia, and Montenegro from 1942 to 1944, after the German invasion of the Kingdom of Yugoslavia. The photographs are believed to have been captioned by the commanding office of the Waffen-SS, and had been in the possession of Friedrich Wilhem Krueger, who served with the division from November 1943 until April 1944.

Event History
"Prinz Eugen" was a SS-Division, which was formed between April and October 1942. The full name of the division was the 7th Volunteer Mountain Division (Freiwillige Gebirgsdivision). While the officers were almost entirely national Germans (Reichsdeutsche), the enlisted men were ethnic Germans from outside the Reich (Volksdeutsche). The Division was brought into action after the invasion of Yugoslavia to fight against partisans. In 1942, they operated first in Serbia and then also in Croatia after 1943. They fought against numerous groups, including a communist group commanded by Tito. The Nazis considered everyone a partisan and hence burned down entire villages and tortured and massacred unarmed civilians, men, women and children as collective punishment for supporting the resistance movements.
(Thomas Casagrande, Die Volksdeutsche SS-Division "Prinz Eugen")
Biography
Friedrich Wilhelm Krueger (1894-1945), was a Nazi official and member of the SS and SA. Kruger was born in Strasbourg. In 1929 he became a Nazi party member, joining the SA in 1930 and transferring to the SS in 1931. The following year he was elected to the Reichstag, and in January 1935 he was promoted to the rank of Obergruppenfuehrer. From October 4, 1939 to November 9, 1942 Krueger served as the Higher SS and Police Leader in the Generalgouvernement. As such, he was responsible for the liquidation of all the ghettos in the Generalgouvernement and for the operation of the Belzec, Sobibor and Treblinka extermination camps, where 1,720,000 Jews were murdered. In May 1942, Krueger was given the additional title of Secretary of State for Security in the Generalgouvernement administration and also became Himmler's Representative for the "Strengthening of Germandom in the Generalgouvernement". In the latter function he was responsible for the expulsion of 110,000 Poles from the Zamosc area and the settlement of Germans in their place. In May 1944 Krueger was appointed commander of the "Prinz Eugen" Division of the Waffen-SS, which fought against the partisans in Yugoslavia. On May 9, 1945, the day after Germany's surrender, he committed suicide in Liepaja (Latvia). He kept a travelogue in 1944 which mostly includes descriptions of landscapes in Yugoslavia; he lists the towns and villages he went through and adds a few personal notes about his wife and son. There are no details about the military actions conducted against partisans.