Certificate of identity in lieu of passport issued to Tobiasz Gross prior to his immigration to the United States. 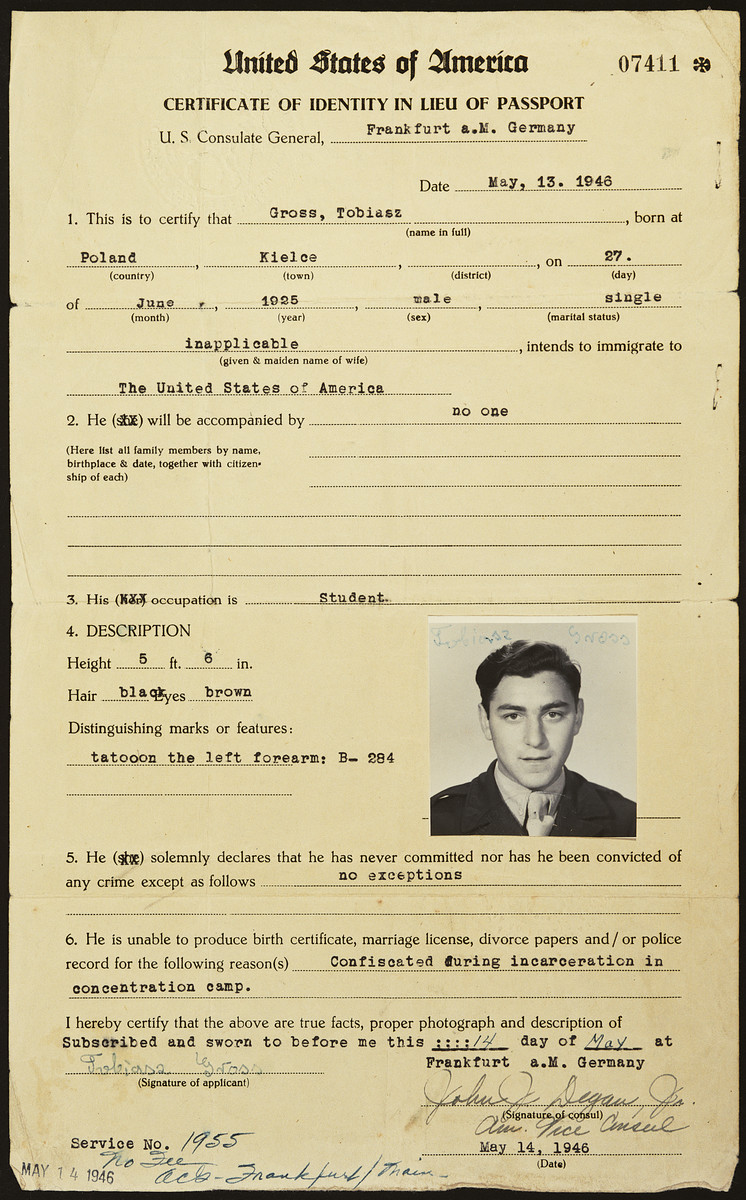 Certificate of identity in lieu of passport issued to Tobiasz Gross prior to his immigration to the United States.

The paper lists his identifying mark as a tattoo on his left forearm, B-284, and states that he was unable to produce other document because it was confiscated during his incarceration in concentration camp.

Biography
Ted Gross (born Tobiasz Grojs) is the son of Israel Grojs and Sheindla Szkolnick Grojs. Israel Grojs was one of six children born in Daleszyce, Poland to Berl and Chana nee Cooper. He was an estate manager and prior to WWII, he lived in Kielce, Poland. Sheindla Grojs was one of nine siblings born in Kielce, Poland to Welvel and Udla nee Szkolnick. Tobiasz was born Three days after the start of World War II, German troops occupied Kielce and immediately subjected the Jewish population to various persecutions. In late March 1941 a ghetto was established in the city, and on Passover the Jewish community became hermetically sealed off from the greater population. In August 1942 the Germans conducted a three day deportation action. Tobiasz's parents and younger brother were rounded-up and deported to Treblinka where they were murdered. Israel was 42 years old, and Sheindla was only 37. Tobiasz, who was spared the fate of the rest of his family, was selected to work on a labor detail cleaning up the ghetto. When this work was completed, he was sent to Pionki to work in a gun powder factory. From there Tobiasz was deported to Auschwitz where he was tattooed and given work as a barber. From Auschwitz, Tobiasz was sent to a series of different camps including Sachsenhausen, Oranienburg, Flossenburg, and Mauthausen. Tobiasz was eventually sent to Dachau where he was liberated by the American army on April 29, 1945. After liberation, Tobiasz spent a year and a half in a DP camp in Frankfurt. He intended to wait until he could immigrate to Israel. However in the interim, his mother's brother, Arthur Sklolnik, who had immigrated to the United States before the war, found him and agreed to sponsor his immigration to America. Tobiasz also had two other uncles, Morris and Stanley Skolnick, who had come to the States before the war. Tobiasz immigrated to the United States on board the Marine Flasher on June 6, 1946. He later married and had three children, Steve Gross, Sharon Gross Weisner and Paulette Gross Mann. Tobiasz learned that with the exception of his father's sister Celia Grojs (later Lewis) who had survived the war hiding in The Netherlands, and a cousin who went to Israel in 1928, all the rest of his extended family perished during the Holocaust.