Passport issued to Flora and Ladislaw Perl prior to their immigration to the United States. 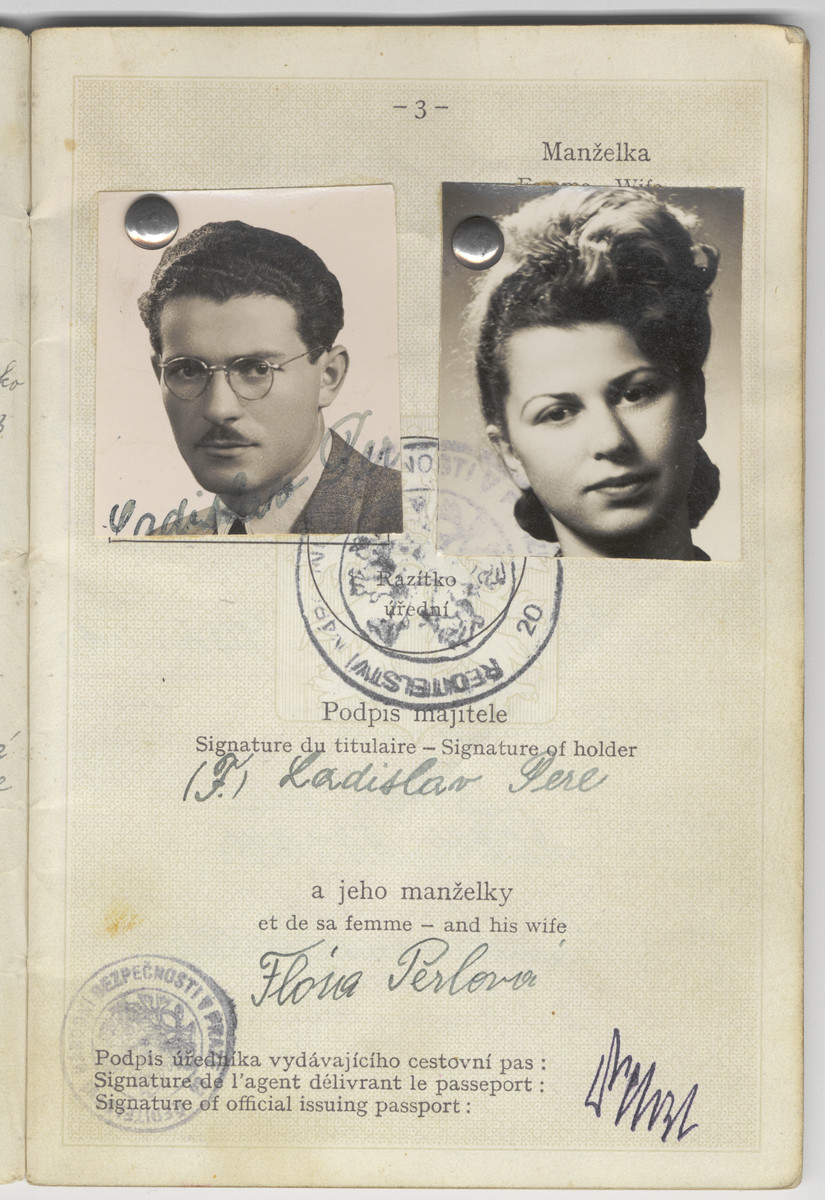 Passport issued to Flora and Ladislaw Perl prior to their immigration to the United States.

Biography
Flora Pearl (born Flora Stark) is the daughter of Jeno and Elza Stark. She was born on March 27, 1923 in Kisvarda, Hungary where her parents owned a wholesale wine and beer business as well as considerable real estate. Flora was third of seven children. Her siblings were David, William, Lipot, Lilly, Elek and Moishe. After the Hungarians forbade Jews from owning businesses, her father signed over all their property to a tenant in exchange for promissory notes. David continued to work in the business until he was considered a liability and forced to leave. Flora's brother William was sent with a Hungarian labor battalion to the Soviet Union. In March 1944, Germany seized control of Hungary, and Flora and her family were confined to a ghetto. Then on the second day of Shavuot they were deported to Auschwitz. Flora's parents, Jeno and Elza Stark, and her two youngest siblings, Lilly and Moishe, were killed upon arrival as were David's wife who was in her ninth month of pregnancy and his two-year-old child. David and Elek initially were selected for forced labor. However, Elek was killed a few days later after first having been sent to a punishment camp. David survived the war only to die in Theresienstadt shortly after liberation on July 21, 1945. Flora spent two months in Auschwitz, and then on the night of Tisha B'Av (July 29, 1944) she and a thousand other girls were ordered to fully undress. They spent the night standing naked, and in the morning they were given showers, issued other clothes and brought by wagon to Kaufering Lager 4. Flora was assigned heavy work in the forests, doing road construction and building the new camp. However, her cousin, Anna Stark, was given lighter indoor work sewing dresses for an SS woman. On the first day of Rosh Hashanah, her cousin became extremely upset to be spending the holiday in camp. The SS woman noticed and asked why she was crying. Her cousin lied and said that she was distraught that while she had a good job indoors, her "sister" had to perform heavy labor outside. The next day the SS woman arranged for Flora to be transferred to the camp kitchen. There on the second day of Rosh Hashanah, she met Ladislaw Perl (later Louis Pearl).

Ladislaw Perl is the son of Hermann and Bertha Perl. He was born on April 30, 1919 in Homonna, Czechoslovakia where his father had a lumber yard. Ladislaw had four sisters and one brother: Blanka, Rose, Regina, Manya and Samuel. His mother was deported to Poland in 1942. When her husband learned that she had been taken, he had a fatal heart attack. Bertha escaped from a killing action and returned home to Czechoslovakia, only to be deported to Auschwitz in 1944 where she perished. Ladislaw was sent to a Hungarian labor camp for three years. Shortly after he returned home, he was deported to Auschwitz. From Auschwitz he was sent to clean up the destroyed Warsaw ghetto, and in the fall of 1944 he was sent to Kaufering. He worked in the SS Lager bringing in food supplies from the wagons. After Flora was transferred to the women's lager #3 a few kilometers away, Louis kept in touch through smuggled correspondence. In the spring of 1945, he bartered bread for two gold rings that came to the camp after the liquidation of the Lodz ghetto. He then bartered with a dentist to inscribe the rings with Flora and his names and the date 1944. Through the standard underground network, he tried to smuggle Flora's ring to her in the women's camp. Unfortunately, the Germans intercepted the package and confiscated the ring; however Ladislaw still kept his own inscribed ring.

In April 1945 the Germans liquidated Lager 4 and sen the women on a death march. Flora was liberated in Buchberg. Ladislaw was transferred to Allach where he was liberated. He immediately went to search for Flora and propose. They reunited in May 1945, but before marrying Ladislaw, Flora wanted to return to Hungary to find any remaining relatives. Only her brother William survived. Ladislaw's sister Blanka was murdered together with her children, as was Rose. Manya was pregnant when she arrived at Auschwitz. Though she was sent to the left, she managed to escape to the good side. When she arrived in Lager 1 a Jewish physician, Dr. Pearl Gizella, gave her an abortion. Manya survived the Holocaust, reunited with her husband and gave birth successfully to a son. His siblings Regina and Samuel also survived. Ladislaw and Flora married in Prague on November 4, 1945 and immigrated to the United States in June 1946. In May 2006 Ladislaw and Pearl donated Ladislaw's gold Kaufering wedding ring to the United States Holocaust Memorial Museum.