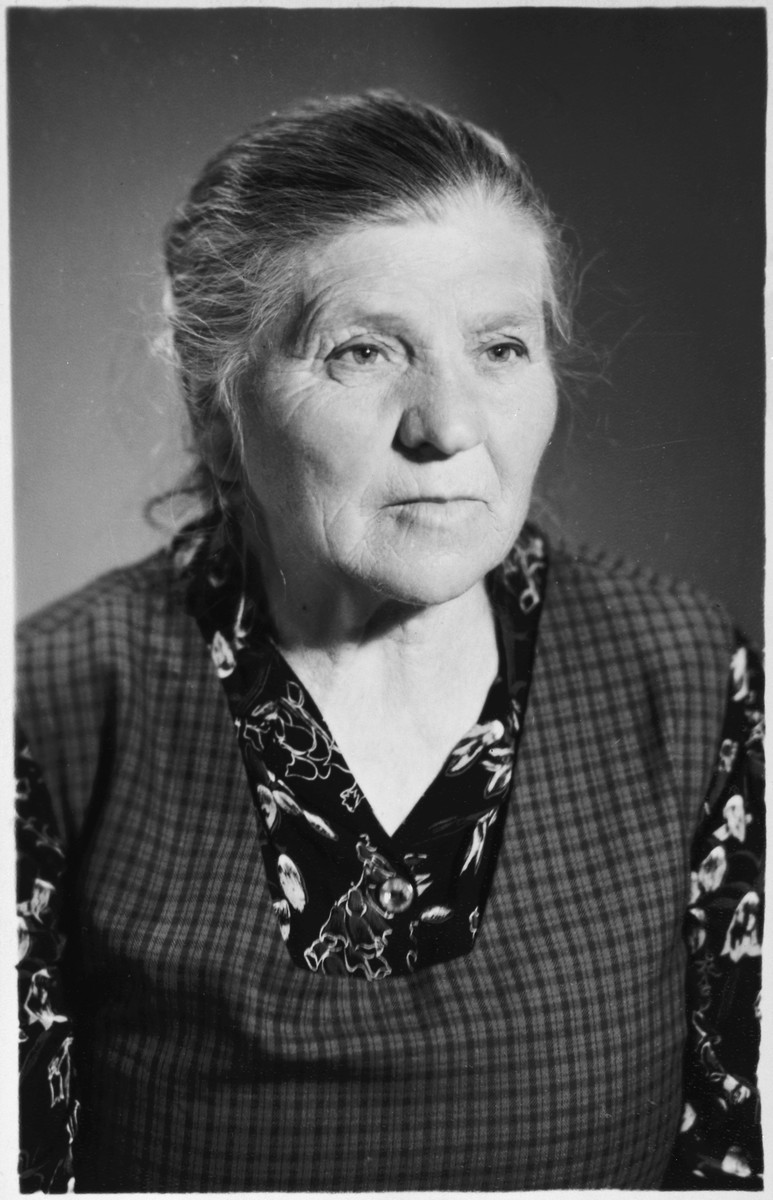 Event History
Aniela Staniewski lived with her husband Edward in the rural Polish town of Staniewicze. They were farmers by trade, but due to a grave illness Edward was unable to assist his wife during the war. In spite of the decree by HItler's regime that the aiding of Jews was punishable by death, the Staniewskis agreed to hide the Blumstein family upon their escape from the Grodno Ghetto in 1943. At the time of the Soviet liberation of Poland in the Spring of 1944 Aniela was hiding 8 Jewish refugees in addition to housing her husband, niece and her self in her small cottage. After the end of the second world war Aniela remained in Staniewicze until her death in 1982. She has been recognized as one of the Polish Righteous who risked their lives during the Shoah.

See "Grodno" in Encyclopedia of Camps and Ghettos, Volume 2 Part A.
Biography
Alexandre Blumstein is the son of Dr. Chaim Blumstein and Estera (Bouchin) Blumstein. Chaim and Estera met in Warsaw, married in 1917 and settled in Grodno, a city on the river Niemen close to the Lithuanian border in 1921. Alexandre was born in 1930 in Grodno, Poland and his older brother Nataniel (Tolo) in July 1921. Chaim Blumstein established a thriving medical practice, and the Blumsteins also owned a sanatorium in the town of Druskieniki. This country spa and hotel was a source of solace for Alexandre and his family, but was lost at the onset of the war. Alexandre's early years were spent happily with his family and German born governess Thea Boehm (who in December 1938 was deported to Königsberg for lack of Polish citizenship). His father's respected position in the Grodno community ensured the family a relatively pleasant existence in spite of the ever present and growing antisemitism. Following the German invasion of Eastern Poland and the Soviet Union, Grodno fell under German occupation on June 22, 1941. On the first day of German air raids, Alexandre was superficially wounded. Due to the large number of wounded civilians, Dr. Blumstein was called into medical service and the family waited out the first day of occupation in expectation of his return (At the time of the invasion, Alexandre's brother Tolo was living in Ludov, Ukraine. He narrowly escaped the pogrom there and walked 750km back to Grodno to be reunited with his family). Upon taking control of Grodno the Germans implemented measures such as requiring all Jews to wear light blue Stars of David, as well as the order to bow to German soldiers whom they encountered on the streets. A disregard for these measures resulted in violence, which was administered by both Germans and Poles. After a few months of occupation the Germans established a ghetto in Grodno on November 1, 1941. 25,000 Jews were forced to inhabit a space designed to accommodate approximately 5,000 people. The ghetto was split into two parts; Ghetto 1 and Ghetto 2 were created for productive and unproductive workers, respectively. For the first year (November 1941-1942), life for Alexandre and his family was relatively stable. Dr. Blumstein's status as a respected surgeon allowed for the family to take care of its own basic needs as well as those of their relatives and neighbors. However, this first year was not without incident. Chaim Blumstein was arrested by the Gestapo, interrogated and beaten. He returned home only after intervention by the Judenrat. The waning stability of the first year came to an end on November 2, 1942 with the Ghetto's first mass killing. The commanding officers of each Ghetto, Kurt Wiese and Otto Strebelow, randomly fired into a crowd murdering twelve Jews and wounding forty. This marked the end of the Grodno Ghetto and the beginning of the transport of Grodno's Jewish population to extermination camps. The threat of deportation forced the Blumstein family to prepare their escape in early 1943. With the help of Dr. Antonin Dochu, a Catholic doctor from Zukiewizce, Alexandre and his mother escaped through Grodno into the countryside to the farm of Aniela and Edward Staniewski. Chaim and Tolo stayed behind to squelch rumors, but followed shortly thereafter. Chaim Blumstein was forced to leave his ailing mother behind. In Staniewizce, Aniela Staniewski lived with her gravely ill husband Edward. The Staniewski's agreed to hide the Blumstein family in exchange for free medical service for Edward. To accommodate the Blumstein family as well as four other refugees without arousing the suspicion of any neighbors or passersby, they built a shelter in the foundation of the house. This shelter was 9 feet long, 7 feet wide, 5 feet deep, and the occupants had to sit with their backs to the wall and feet outstretched. The shelter's earthy interior soon became infested with cockroaches and earwigs, as well as being damp and musty. The closing in of the front line brought added tension to the already exhausted household. German troops conducted random searches of small towns for grain and meat, and such a search would have put every member of the household in mortal danger. On July 16, 1944, after 18 months in hiding, the Blumsteins were liberated by the Russian Army. The Blumsteins left Staniewizce and stayed briefly in Liuba before moving back to Grodno and eventually relocating to Lodz. Chaim, however, passed away on July 6, 1946. Estera, Alexandre, Tolo and his wife Hela immigrated to Paris. Alexander Blumstein went on to receive a Ph.D. in chemistry and relocated with his wife Rita Blattberg (a survivor from Krakow) to the United States in 1960.