German Jewish athletes prepare for the track and field Olympics. 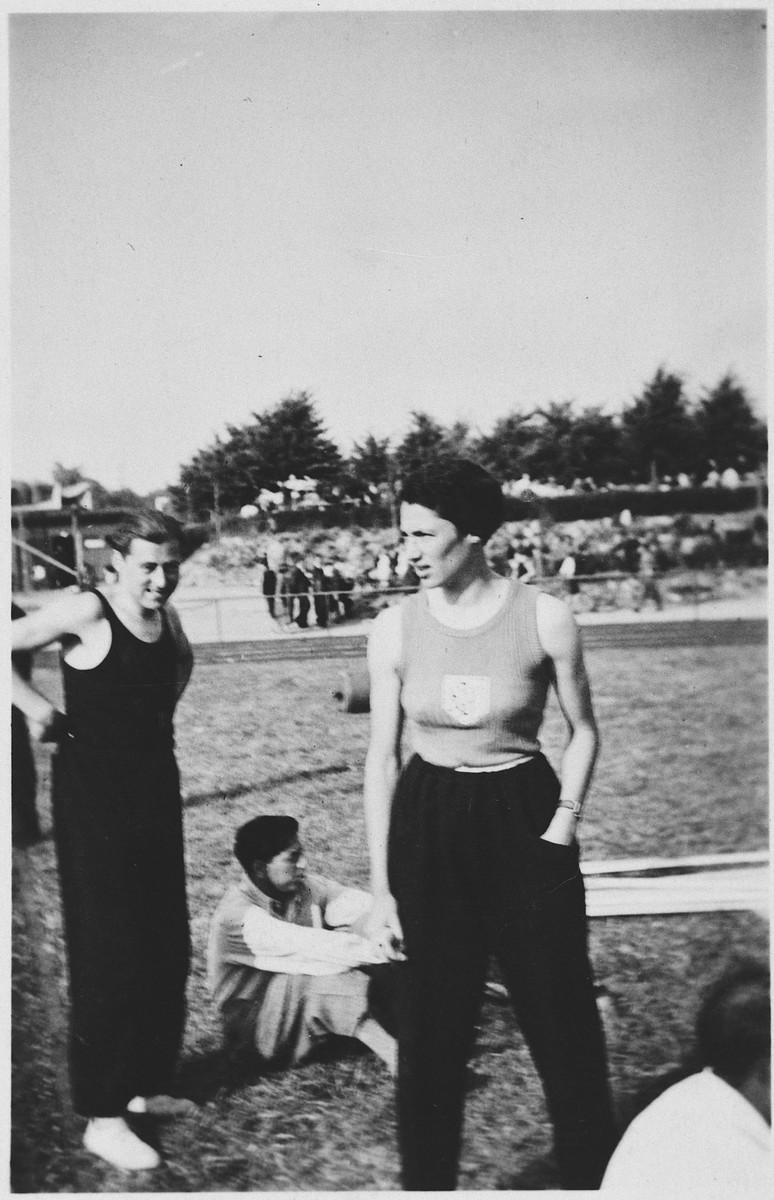 German Jewish athletes prepare for the track and field Olympics.

Pictured are Gretel Bergmann and Harry Bergmann (no relationship).

Biography
Margaret Lambert (born Gretel Bergmann) is the daughter of Edwin and Paula (Stern) Bergmann. She was born April 12, 1914 in Laupheim, Germany, where her father owned a factory that manufactured wigs and other hair products. Gretel had two brothers: Rudolf (b. 1911) and Walter (b. 1926). Gretel became involved in sports at a very early age. By the time she graduated from the gymnasium in Ulm, she was recognized as one of the world's best young athletes. However, following Hitler's rise to power, Gretel was excluded from organized sports, as well as from the German university system. In 1933 she traveled to England in the hopes of gaining admission to a British university. In 1934 Gretel won the British high jump championship. By that time, however, the German government was under pressure to allow German Jewish athletes to participate in the upcoming Berlin Olympics. Nazi officials sent Edwin to England to tell Gretel that if she did not return her family would face the consequences. Gretel complied and returned to Laupheim. Still unable to participate in organized sports, Gretel was invited by the RJF (Reichsbund fuer Juedische Frontsoldaten, Reich Union of Jewish Front Soldiers) to train at their center in Stuttgart. In 1935 she was accepted into a small Stuttgart sports school. Although she was the only Jewish athlete at the school, Gretel was still treated as an equal by her classmates. Shortly before the start of the Olympics in 1936, she was compelled to take her final exams early and leave the school. She was also forbidden to take part in the German national championships, but at a competition at the Adolf Hitler Stadium in Stuttgart, Gretel equaled the German record and was ranked number three in the world. On July 15, 1936 the U.S. Olympic team set sail for Germany. No longer afraid that America would refuse to participate in the games, the German government sent Gretel a letter on July 16 stating that due to her poor athletic performance, she would not be invited to participate in the Olympics. Upon returning to Laupheim, Gretel and her family decided to leave Germany. With the help of American sponsors, Gretel and Rudolf immigrated to New York in 1937. The next year Gretel was able to secure a visa for her fiancé, Bruno Lambert. In 1940 transport to England was arranged for the rest of the family. They were interned for a time as enemy aliens until Gretel and Rudolf arranged for their immigration to the U.S. in 1941.