Young children, some holding dolls, pose with their teacher outside a building in a religious kibbutz in Salzburg Austria. 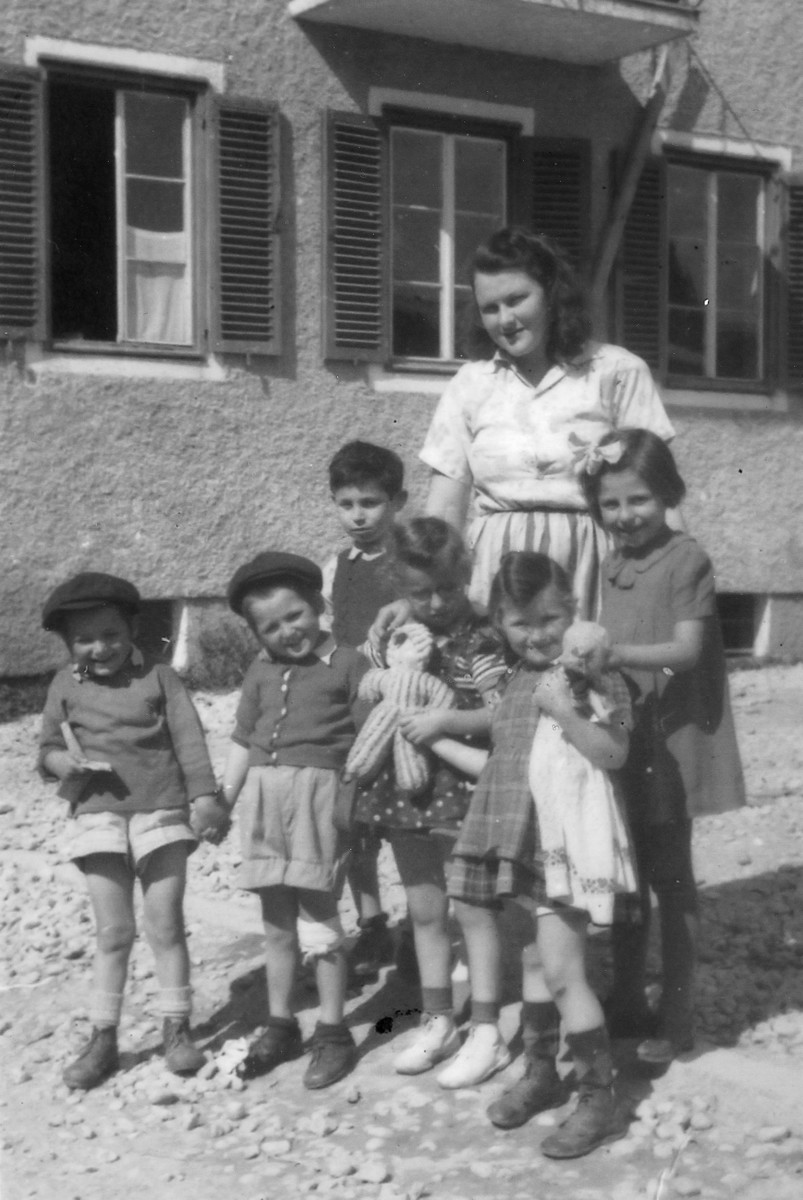 Young children, some holding dolls, pose with their teacher outside a building in a religious kibbutz in Salzburg Austria.

Biography
Sheindel Bella Trebitz was born on March 30, 1930 in Subotica in Serbia, Yugoslavia. She is the youngest daughter of Robert and Betty, Singer Trebits. Robert Riven Tebitz was a peddler and Betty Baila Sara took care of the three children: Israel Srul b. September 1921, Itzi Itzhak b. 1924. The family lived an orthodox Jewish life; they spoke Hungarian at home. The family lived in Bacskossuthfalva, a small village south of Subotica, in a Serbia. Both boys studied in a yeshiva, but Itzi contracted tuberculosis and died in 1942 in Budapest. Hungary annexed the Subotica area on March 19, 1941 and immediately ordered anti-Jewish measures. Sometime in 1943 Israel Srul Trebitz was inducted into the Hungarian Forced Labor battalions.

The Germans invaded Hungary in March 1944 and on May 8, 1944 Robert Trebitz was rounded up together with other Jewish men of the village and taken to the Subotica prison. He was never to be seen again. The Trebits family home was sealed and their money was confiscated. Bella and her mother were taken to Bacsalmas, an interim ghetto and in southern Hungary. Her mother worked in the kitchen and Sheindel worked in the office of the ghetto. The ghetto is guarded by Hungarians and the Germans military. The ghetto was overcrowded when the Jews from Subotica and the Baja ghetto were transferred to Bacsalmas.

Approximately on June 20, 1944 Sheindel and Betty Trebitz and other Jews from the transitional ghetto in Bacsalmas were brought by box-car train to the Auschwitz-Birkenau death camp. On the ramp, the daughter was forcibly separated from her mother and selected as an able bodied labor force. Sheindel's hair was shorn, she wore prisoner's garb and she stayed with as many as 1,000 other women prisoners in one barrack. She was just 14 years old. In October 1944 Sheindel was transferred from the Auschwitz-Birkenau camp to Horneburg concentration camp, a sub camp of Neungamme, near Hamburg. She and other women prisoners worked in an ammunition factory, but the conditions were somewhat better. In March 1945 the women were transferred again, this time to Saltzwedel concentration camp, another sub-camp of Neungamme. On April 16, 1944 the American Army liberated the camp and the area. After resting and getting back in shape, Sheindel decided to return to Subotica to search for her family. She hoped that maybe her father and older brother survived the war. In September 1945 Israel Srul Trebitz who escaped earlier from a forced labor battalion and was at that time a soldier in the General Tito's army. The reunion between the siblings was bitter-sweet, as they realized that their father and mother perished.

Israel deserted from the Yugoslav army and escaped via Hungary to Austria. In April 1946 Sheindel and her new sister-in-law, Rochl Stern Trebitz, left Yugoslavia and joined Israel in the "New Palestine" DP camp near Salzburg, Austria.