A drama group performs a play in the Zeilsheim displaced persons' camp. 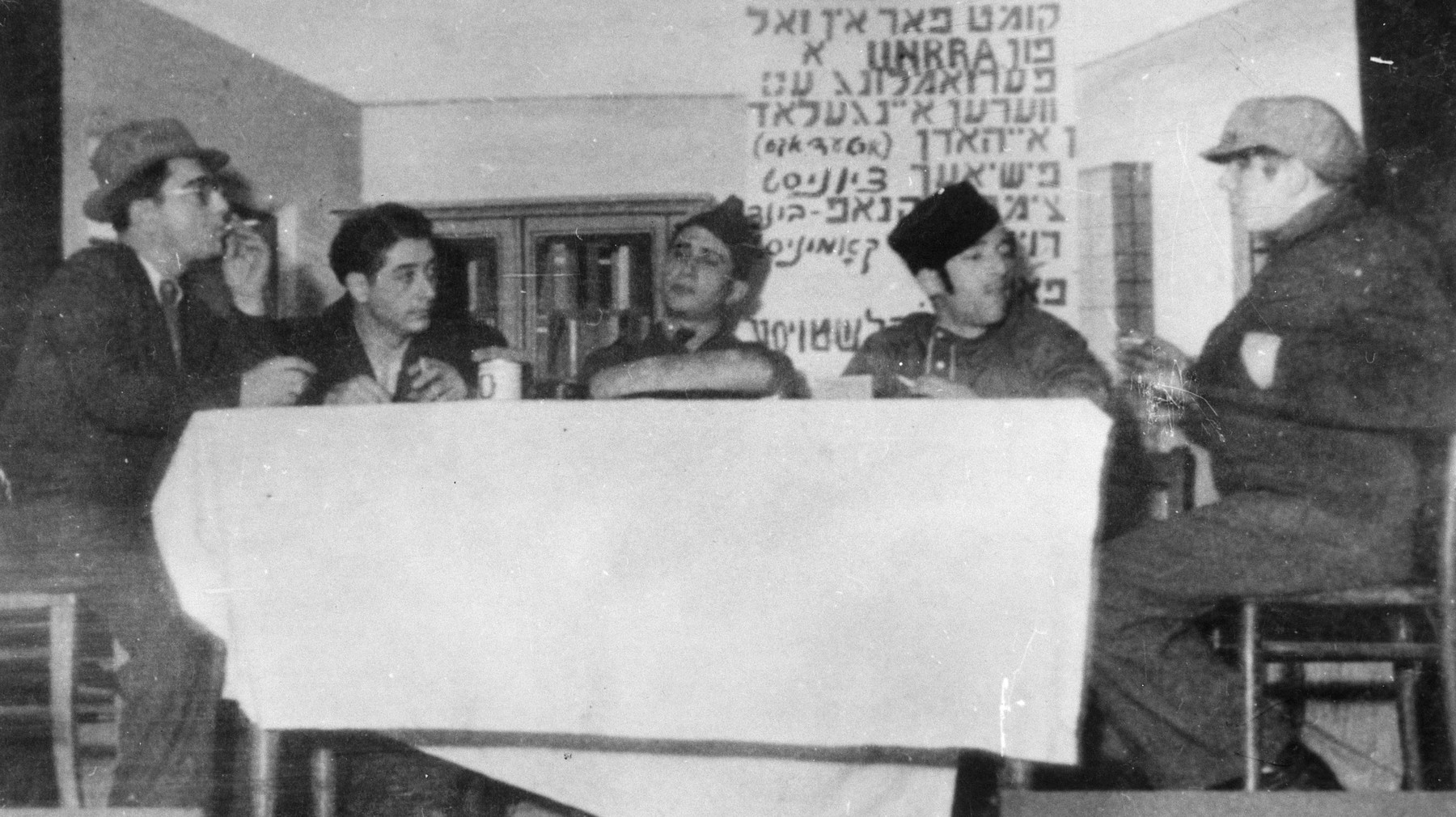 A drama group performs a play in the Zeilsheim displaced persons' camp.

Biography
Henry Greenbaum (born Chuna Grynbaum) is the son of Gittel and Nochem Grynbaum. He was born in Wierzbnik (later Starachowice), Poland on April 1, 1928 where his father, an Orthodox Jew, ran a tailor shop in their house. Chuna had eight older siblings: Brondel, David, Raisel (later Rubinstein, b. 1902), Faige (b.1909), Zachary (b. 1918), Dina, Chaja (b. 1922) and Yita (b.1926). Before the war, Dina (Diana) moved to the United States and married a cousin. In late spring 1939, Chuna's father heard a rumor that everyone should try to obtain a factory job if possible and proceeded to find jobs for Chuna and his three younger sisters who were still living at home. Soon afterwards in June 1939 Nochem Grynbaum died suddenly of natural causes, and less than three months later, on September 1, Germany invaded Poland starting World War II. Chuna's mother Gittel evacuated to a nearby farm to escape the bombing together with David, Chuna, Yita, Chaja, Faige and Faige's baby daughter. (Brondel and Raisel were living with their husbands, and Zachary was in the Polish army.) One morning David and Chuna met a soldier on a bicycle fleeing the Germans. David decided to go with him but told Chuna he was too young to run away and had to return home. After returning to Wierzbnik with his mother and sisters, Chuna continued to work in the munitions plant, now named the Hermann Goering Werke. In February 1941 the Germans established a ghetto in Starachowice surrounded by barbed wire. Do to the meager food and soap rations, the ghetto soon became infested with lice, and a typhus epidemic broke out. Many died within the ghetto, and Germans killed others who were too sick to work. Then on October 27, 1942, the Germans and their collaborators conducted a selection for able-bodied workers. Others were deported to Treblinka including Chuna's mother, Raisel and her two children and Faige's daughter. Brondel and her family were deported separately and also killed. Since Chuna and his three sisters had factory jobs, they were sent with other workers to a nearby slave labor camp built on top of a stone quarry. Though men and women were sent to different barracks, Chuna managed to maintain almost daily contact with his sisters. In 1943 Yita died of typhus at age of seventeen. Chaja was killed after she also contracted typhus. Faige, Chuna's only remaining sister worked in an SS tailor shop. In July 1944 an SS officer told the tailors to complete all their work by a given date because they were going to close the camp. When the tailors returned to the barracks they began devising a mass escape plan. On the night of the escape, Faige together with a Jewish policeman found Chuna, and all three began running together. After a short while, a guard dog began barking alerting a guard who opened fire on the escaping prisoners. Chuna was shot in the back of his head and lost consciousness. When he woke up, he could not see either his sister or the policeman. The following day all the prisoners were summoned for a roll-call in front of a pile of corpses of those who had been killed. Chuna recognized the body of his sister Faige. The Germans then shot captured escapees, including the policeman, as a deterrent against future escape attempts. A couple of weeks later, they deported all the surviving prisoners by cattle car Auschwitz. Chuna was tattooed, given a shower and issued a uniform. After some time Chuna was transferred to Buna Monowitz to work for the IG Farben Company. As the Soviet front approached, the prisoners were evacuated by train to Flossenbuerg, a camp near the Czechoslovakian boarder. After three months, the prisoners were evacuated by train and by foot on a death march. Chuna finally was liberated by American soldiers from the 3rd Armored Division on April 25, 1945. American medics treated Chuna's wounded head and brought him to the home of a German civilian to recuperate. From there Chuna went to the Zeilsheim displaced persons' camp near Frankfurt, Germany. While searching for relatives in Bergen-Belsen, he met a female cousin who had cared for his wounds the night of the attempted escape. She told him she was returning to Poland to look for other family members and invited him to go with her. Chuna declined since he wanted to stay in the American zone in the hopes of coming to the United States to reunite with his older sister who had immigrated before the war. The cousin however returned to Poland and found Chuna's older brother, Zachary, who she brought back to Germany with her. After serving in the Polish army, he survived imprisonment in the Vilna ghetto. Zachary sent a telegram to Dina, their sister in Washington notifying her that they had survived, and she sponsored her brothers' immigration to the United States in early summer 1946. Upon arrival in New York, Chuna was shocked to see David, his brother who had fled without him shortly after the German invasion. David had made his way to Vilna, and from there, he immigrated to America in 1941. He brought Chuna to their sister's house. Chuna, now Henry, settled in the Washington DC, married and has four children and ten grandchildren. After retiring from business, he became a regular volunteer for the Holocaust Museum and speaks to audiences around the country including a conference for teachers in Austin, Texas, and audiences in Fort Campbell, Kentucky as well as at an Indian Reservation.