Members of the Zoska battalion of the Armia Krajowa stand atop a German tank captured during the 1944 Warsaw Uprising. 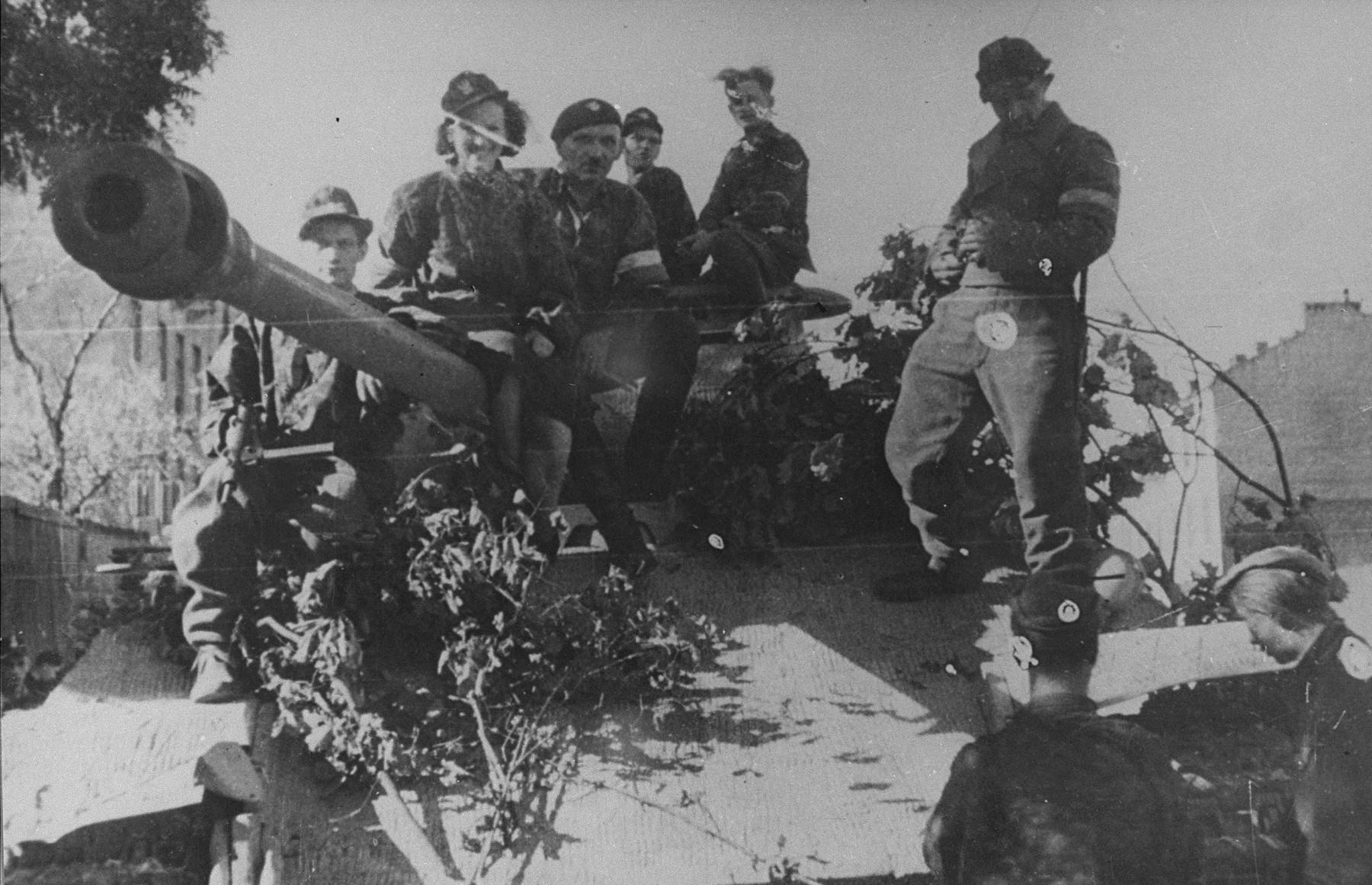 Members of the Zoska battalion of the Armia Krajowa stand atop a German tank captured during the 1944 Warsaw Uprising.

The tank was used by the battalion during its capture of the Gesiowka concentration camp.

The woman pictured sitting on the tank has been identified as Bohdana "Czarna" Kraszewska (later Kraszewska-Domanska), who was a liaison officer in the Warsaw Uprising and tookan active part in the resistance throughout the war.

Event History
The Warsaw uprising began on August 1, 1944. Under orders from the Polish government-in-exile in London, the Polish Home Army (Armia Krajowa) began attacking the Germans in hopes of winning control of the city before the impending arrival of the Red Army. Numbering only 23,000 under-armed men, the Polish fighters, under the command of General Tadeusz Bor-Komorowski, faced a German force of tens of thousands of heavily armed troops. Most of the Poles were young people and some units included Jewish and non-Jewish members of the Communist-oriented Armia Ludowa (People's Army, formerly Gwardia Ludowa or People's Guard). On August 4, the Poles liberated several hundred Jewish prisoners from the Gestapo prison on Gesia Street. These Jews, who were mostly Greek and Hungarian, joined the Poles and fought alongside them. Polish civilians also helped the insurgents by providing first aid and organizing supplies and postal service. Within four days the fighting had spread to large parts of central Warsaw and some of the city's suburbs. On August 5, the Germans launched a counterattack, under the command SS General Erich von dem Bach-Zelewski. Aid from the western Allies did not amount to more than a few arms drops. In the first stages of the revolt, the Soviets hindered Allied support; only in mid-September, did the Soviets themselves drop some supplies. On September 14, Polish army units that had previously been parachuted into Warsaw, seized control of the right bank of the Vistula River, but ultimately could not bring relief to the insurgents. The Germans regained control of city on October 2. Over 18,000 Polish fighters and 150,000 civilians were killed during the uprising, including several thousand Jews who had been in hiding following the liquidation of the ghetto. Warsaw's remaining inhabitants were expelled to nearby internment camps, sent as forced laborers to the Reich, or dispersed in the General Government. The Germans then razed those parts of the city not damaged in the fighting, destroying Warsaw in its entirety.

The Polish Home Army (AK or Armia Krajowa), was one of the two main military organizations of the Polish underground that operated in German-occupied Poland. The other major organization was the Communist-oriented People's Army (Armia Ludowa, known as the People's Guard, or Gwardia Ludowa, before January 1944). The AK, which functioned in all areas of the country from the beginning of the German occupation until January 1945, was linked to the London-based Polish government-in-exile, and shared its political orientation. The first commander of the AK was Stefan Rowecki. After his arrest in 1943, he was replaced by Tadeusz Bor-Komorowski, who served from July 1943 until his capture in September 1944. The final commander was Leopold Okulicki. The AK, which had between 250,000 and 350,000 members by 1944, was responsible for intensive economic and armed sabotage during the German occupation. It carried out thousands of armed raids and intelligence operations, bombed hundreds of railway shipments, and was involved in untold numbers of battles with German police and army units. Its forces were behind the Warsaw Uprising of August 1, 1944 that was suppressed by the Germans only on October 2. The AK provided very limited support for the Jewish population. In February 1942 it formed the Section for Jewish Affairs directed by Henryk Wolinski, which collected information about the situation of Polish Jews, on the basis of which reports were sent to London. It also centralized contacts between Polish and Jewish military organizations. The AK provided the Warsaw ghetto fighters with a small amount of guns and ammunition, and during the ghetto uprising, carried out holding actions outside the ghetto walls. Only a few Jews were actually accepted into the ranks of the AK.