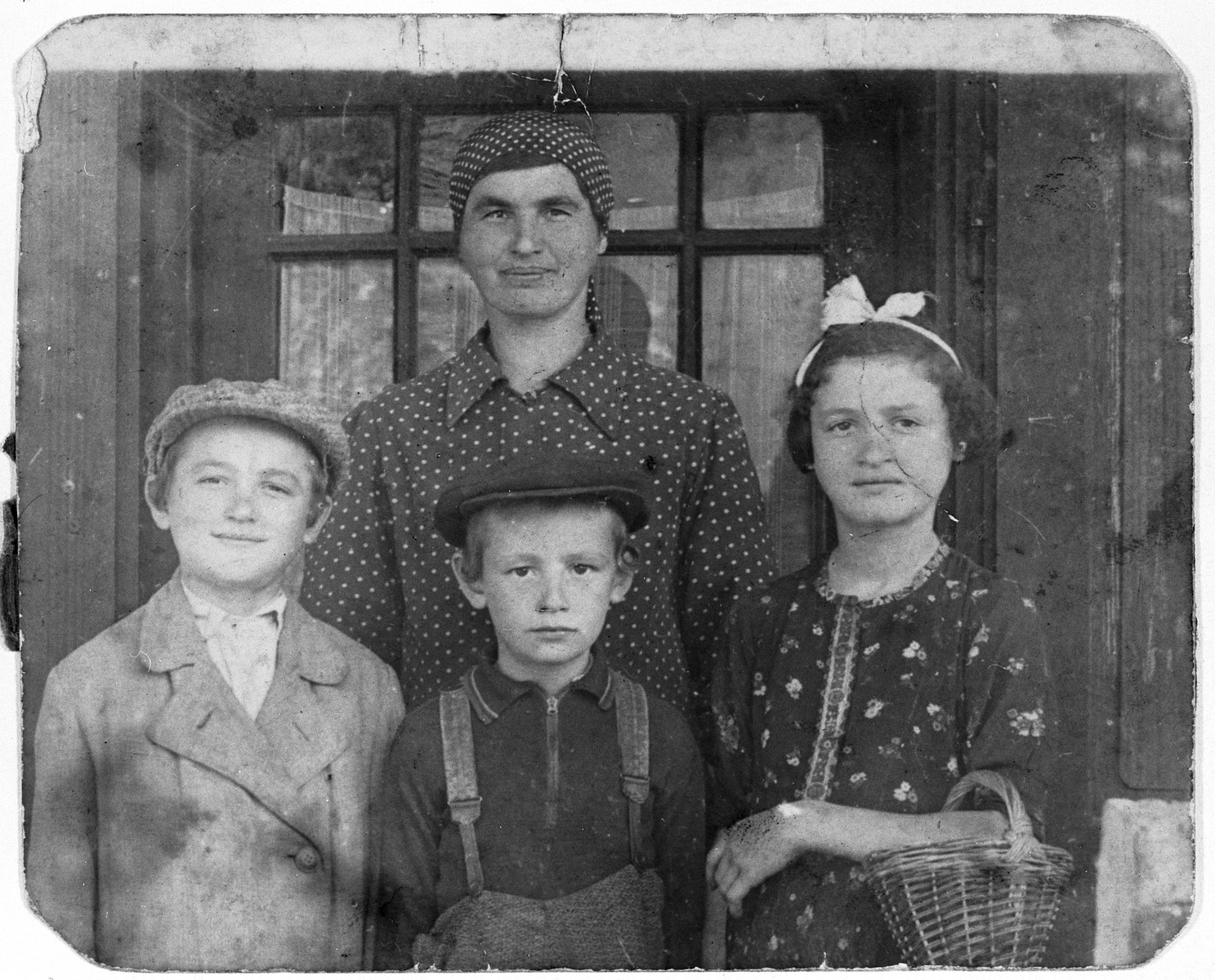 Pictured are Rosi Zelmonovits (back) and her children (left to right) Moritz, Volwi and Eva.

Biography
Haya Shaked (born Eva Zelmonovits) is the daughter of Michael Zelmonovits and Rosi Zelmonovits, nee Cassirer. Eva and her twin brother Moritz were born on June 6, 1932 in Ujfeherto, near Debrecen Hungary. Her father was a merchant and peddler. Eva and Moritz had two older brothers, Chaim (b. 1926) and Shlomo (b. 1928) and a younger brother Volwi (Vermosh, b. 1935). The family was very religious. After Hungary was occupied by the Germans in 1944 the family had to wear the Jewish star, and in May they were sent to a ghetto in Nyiregyhaza, Hungary. The following month they were deported to Auschwitz; Eva and Moritz arrived on their twelfth birthday. Mengele greeted the new arrivals looking for twins, but Rosi did not want to be separated from her children. As a result, Eva, Moritz accompanied Rosi and Volwi as they were sent to the left. At the entrance door to the gas chamber, Eva's mother had a change of heart and told Eva and Moritz to go back and tell Mengele they were twins. Eva never saw her mother and youngest brother again. They joined a few other sets of twins and were taken for showers, tattooed and assigned barracks. Eva went to the Revier and Moritz to the "Gypsy camp." However, they saw each other occasionally during some genetic tests. They were not subject to experiments and were treated much better than most prisoners. They did not have to report for Appel, the daily roll call. In January 1945 Eva was forced on a death march to Ravensbrueck. Moritz remained in Auschwitz and was liberated by the Soviet army. After liberation he began searching for surviving family members. After being told that a Hungarian man was in the hospital, he found their father. Michael Zelmonovits weighed only 44 kilos; Moritz helped him recuperate though he himself was also weak and suffering from a lung condition. After the end of the war, Eva returned to their hometown, Ujfeherto, where she reunited with her father and brother. Michael Zelmonovits sold their apartment, and they moved to Budapest with the help for the Joint Distribution Committee. Eva resumed her studies in the Beis Yaakov, religious girls' school. Moritz, however, stayed in a Joint sponsored hospital in Budakese to recover. He lived there from 1945 to 1956. Their father meanwhile remarried in 1946. In 1949 Eva decided to immigrate to Israel as part of a Youth Aliyah group. She boarded the ship Galil in Marseilles and after arriving in Israel, she stayed first in Beit Olim and then in Beit Halutsoth. Meanwhile, her older brother Shlomo, who had previously immigrated shortly after his liberation from Auschwitz, heard from a friend that his sister had arrived in Israel and found her. Michael and Moritz Zelmonovits immigrated to Canada in 1956. Moritz later moved to New York. Michael passed away in 1982 and was buried in Israel.