Group portrait of children in the Hebrew Tarbut school in Lida. 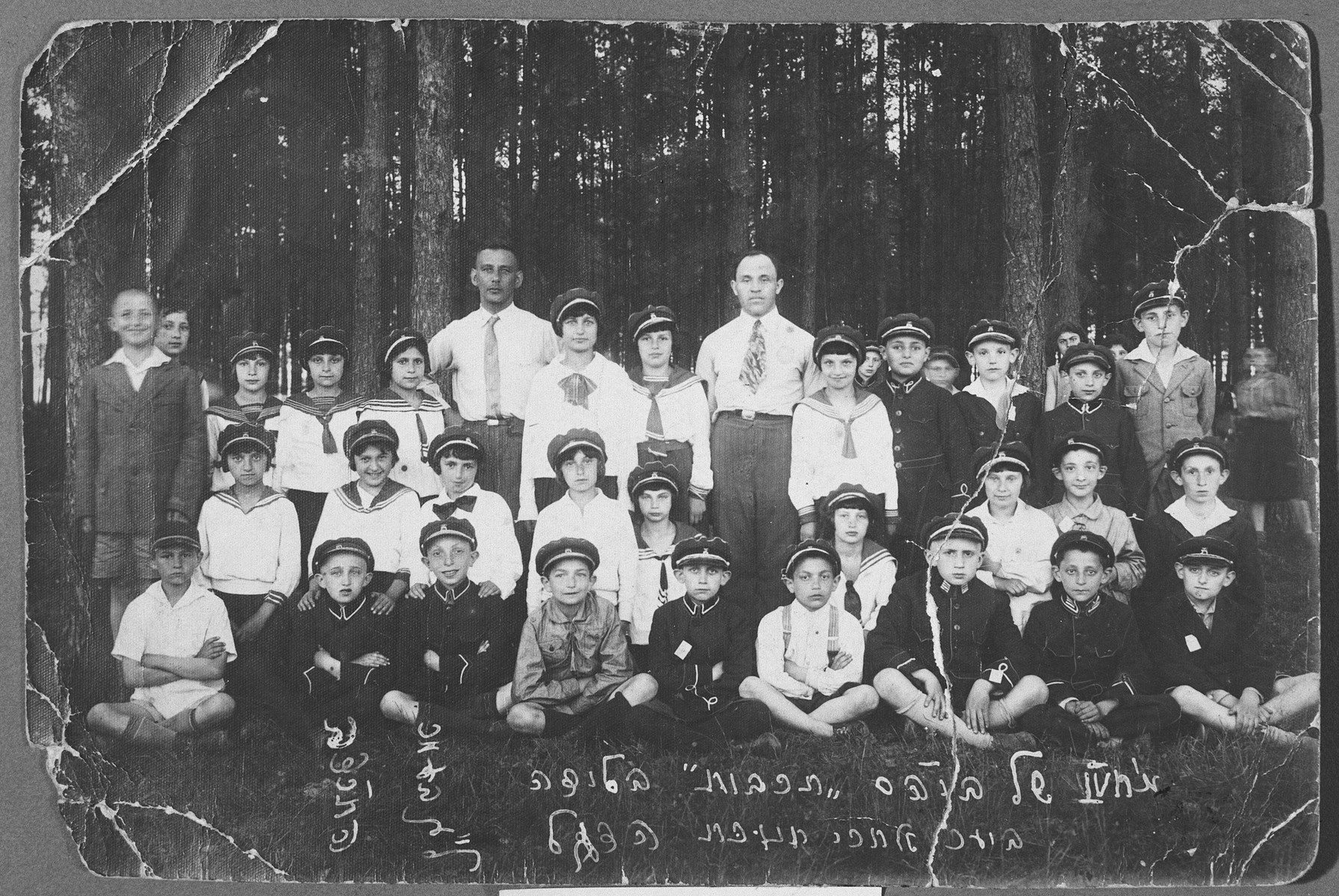 Group portrait of children in the Hebrew Tarbut school in Lida.

Standing first from the left is Eliezer Szmulowicz.

Biography
Aba Gefen (born Aba Weinstein) is the son of Meir and Ruhama Weinstein. He was born in 1920, in the town of Simnas, in Lithuania. He had three younger brothers, Benjamin, Joseph and Yehuda. When Germany invaded the Soviet Union on June 22, 1941, he was studying at the university in Kaunas, the capital of Lithuania. Even before the Germans entered, pro-Nazi Lithuanians carried out a pogrom and arrested Jews en masse. On June 24, the day the Germans entered Kaunas, Aba was rounded up with 20 other Jews and brought to the city square with thousands of other Jews. Another group approached, headed by the Weinstein's landlord, Adolf Blumental and his family. Adolf Blumental had been chief engineer and an honorary colonel in the Lithuanian air force. When he arrived at the square, the Lithuanian commander who had served as an air force officer under Blumental, spotted Blumental and decided to release him and his family. His wife Zina noticed Aba and begged the commander to allow him to join them saying that he lived with them and belonged to the family. The commander consented and Aba was thus spared the fate of thousands of others who were taken to one of the surrounding forts and shot. The killings were temporarily interrupted with a decree ordering all the Jews of Kaunas to move to a ghetto in Slobodka and to wear a yellow Star of David. The decree also stated that those with permanent residence outside of Kaunas could obtain permits to return home. After receiving such a permit, Aba left Kaunas on July 14, 1941 to join his parents and brothers in Simnas, 130 kilometers away. Unlike Kaunas, the Jews in Simnas still dwelt in comparative peace, though the Germans conscripted the men for forced labor. Then on August 22, the German authorities ordered all Jewish males to assemble near the town hall. They selected one hundred young healthy strong men and sent them by truck to the district town of Alitus. Among them were Aba's father, Meir (41 years old) and his brother, Benjamin, aged 17. When they were being lined up for the transport, Meir told Aba that since he was not officially registered as a resident of Simnas he should escape and return home to hide. A few hours later Aba saw the trucks pass by with his father and brother on board. Neither returned. On September 1, the Jews of Simnas again were ordered to assemble in front of the town hall. Aba's mother Ruhama forbade him to go and tucked him into bed, as if he were ill. Within an hour, the Lithuanian activists went from house to house to fetch the absentees. The activist who came to the Weinstein home had been a worker in Aba's grandfather's flour-mill. He agreed to leave Aba alone in exchange for cash and clothes.

On September 10, over 400 Jews, mostly women, children, the sick and elderly, were told to assemble by three o'clock in the barracks beyond the town limits. Aba's mother thought only the stronger men were in danger so she sent Aba and his brother Joseph (age 15) to temporarily hide in the home of a friend, the peasant Slavitsky. She thought that she and her youngest son, Yehuda'le, aged 11, would be spared the worst. Grief-stricken, the older boys took their mother's advice and went to Slavitsky's nearby farm where they were welcomed and told to hide in the hay. An hour later Yehuda'le came running from the barracks to inform them that Aba's friends had already arrived and had sent Yehuda'le to tell him that they should join them: otherwise it was likely the authorities would discover their hiding place and would kill them on the spot. His brothers tried to persuade their little brother to remain with them, but to no avail. Slavitsky then entered the barn and told them to leave. Since other Jews knew he was hiding the brothers, he feared they might leak that knowledge under interrogation. However, in response to Aba's pleas, he allowed the boys to remain until evening. That evening, Aba and Joseph made their way through the fields to the house of the farmer Bogdanovitch who also lived within the town. Bogdanovitch gave them permission to spend the night and the following morning, brought them a bottle of milk and some bread. Aba asked what would happen to the Jews in the barracks, and the farmer gestured that they would be killed. In the afternoon of Friday, September 12, 1941, Bogdanovich came to the barn and related that the Jews had been moved out of the barracks. A peasant woman then came into the yard and described seeing the Jews being led from the barracks to the woods with their hands tied behind their backs. At that moment Aba and Joseph heard the sound of intermittent gunfire coming from the woods where the Jews of Simnas, including Aba's mother and youngest brother, were shot in a long deep pit. Bogdanovitch suggested that Aba and Joseph go to the farmer Smidzun in the village of Glosnik, who was a friend of his father. Aba reminded Bogdanovitch of his promise to try to get the picture album he had left in the attic of his house. After two days he brought Aba his mother's handkerchief containing the family photos, as well as his matriculation and student certificates.

On October 10, in the evening, they left Bogdanovitch's barn and eventually came to a village they thought was Glosnik and began looking unsuccessfully for Smidzun. Suddenly they heard footsteps and saw a woman coming toward them shouting loudly in Lithuanian "Thieves, thieves". Aba pleaded with her not to shout and explained that they were the sons of Weinstein, the shopkeeper. By luck, the woman, Ona Matulevitch, knew their father and invited the boys to her home. She fed them and introduced them to her sons - Sebiastas, Yozas and Vladas and explained where Smidzun lived. Upon parting she gave them her blessing. Aba and Joseph wandered all night but still were unable to find Smidzun. Overcome by panic, they returned to Ona Matulevitch though they feared her sons might be anti-Jewish activists. When they arrived at the Matulevitch farm, the mother and her sons welcomed them warmly. They also relayed that farmhouses were being searched for homemade vodka, and therefore Smidzun probably would be unable to hide them. Instead the Matulevitches agreed to hide the brothers a bit longer. During the day, they hid in the barn and in the evening they ate supper in the house. Aba and Joseph remained with Ona Matulevitch for nine months. One day, having heard rumors that the police were searching every house for illegal home brew, her sons told them to leave immediately. Eventually Mrs. Matulevitch relented and agreed to hide Aba and Joseph in her pigsty. Her sons completely lost their temper and left home together with their younger sister. Mrs. Matulevitch dug a deep pit in the pigsty, pushed Aba and Joseph down into it and covered them with manure. The police did not discover them, the sons returned to their mother, and the two Jewish boys returned to the attic. Years later, Ona Matulevitch became one of the first people whom Yad Vashem recognized as a Righteous Among the Nations.

After they left the Matulevitches, Aba and Joseph hid in the tall stalks of the wheat fields. In the evenings, they knocked at the homes of sympathetic peasants who provided food. But at the end of July 1942, the wheat was started to bend, and they knew they wouldn't be able to stay in the fields much longer. They started a new phase of hiding. Joseph would stay with different peasants while Aba wandered daily from one place to another. He soon discovered that the same peasants who at first trembled at the very thought of helping Jews had become used to the idea and began to shelter Aba for one or two days, and Joseph for longer. While wandering from village to village and from farmer to farmer, Aba learned that some Jews escaped from the Kovno ghetto and were hiding nearby. He immediately visited those Jews who asked for his assistance. Little by little, he assembled a group of 12 Jews, in addition to his brother and himself. One of them was, unfortunately, caught in January 1944, but the other eleven survived with the help of Aba's farmer friends. The eleven who survived were: Shmulik Ingel and Lea Port, Zvi and Rachel Levit, Leib and Rachel Frank, Olga and Abrasha Levin, David Gamsky and two girls a certain Margolis had sent to Aba from the ghetto. In April 1944, a number of peasants told him that the Germans were searching for him. At the same time, the Red Army was advancing and the Germans were in retreat. Aba decided to try and join, together with his group, the general pro-Soviet partisan movement. On May 31, 1944, Aba met with Alphonse Rushkovski, one of the leaders of the anti-German partisans and informed him of his decision. The Soviets only allowed young armed recruits to join their partisans. The partisans welcomed Aba and his friend Shmulik Ingel who carried arms and also accepted Joseph and Abrasha Levin, both aged 17, although unarmed. They considered the rest of Aba's group as "extra mouths" and competitors for provisions from the peasantry, but Aba told Rushkovsky that he would enlist only on the condition that he could care for his entire group. When he was told this was impossible, he responded that he would create his own independent group instead. Fighting intensified in the region by July. Aba arranged for the members of his group secure places until the war was over, while he, his brother, Shmulik Ingel and Lea Port went towards the front arriving in the village of Kumatch. On July 29, 1944, the shelling stopped, and the Russians entered the village of Kumatch. By coincidence the captain who liberated Aba and his friends also was Jewish. Aba not only saved himself, but he also helped his brother and eleven other Jews to survive. Throughout his time in hiding, Aba maintained a diary in Hebrew which was later published as a book in six languages. A copy of the restored diary is at the U.S. Holocaust Memorial Museum in Washington.

After the war Aba worked for the Bricha to facilitate illegal immigration to Palestine. While in Bad Reichenhall, Germany, he met Frida Szmulowicz from Lida Poland. Frida's father and older brother escaped to Shanghai, but she, her mother and brother were deported to Siberia in 1940 before they could leave. Her mother managed to maintain a religious home in Siberia and even kept kosher during a year she spent in a Soviet prison. They married on October 21, 1947 in Salzburg Austria and immigrated to Palestine in February 1948 en board the Transylvania.