Employees of the Zentral Einkaufstelle, the central purchasing department of the ghetto, process the distribution of bolts of cloth. 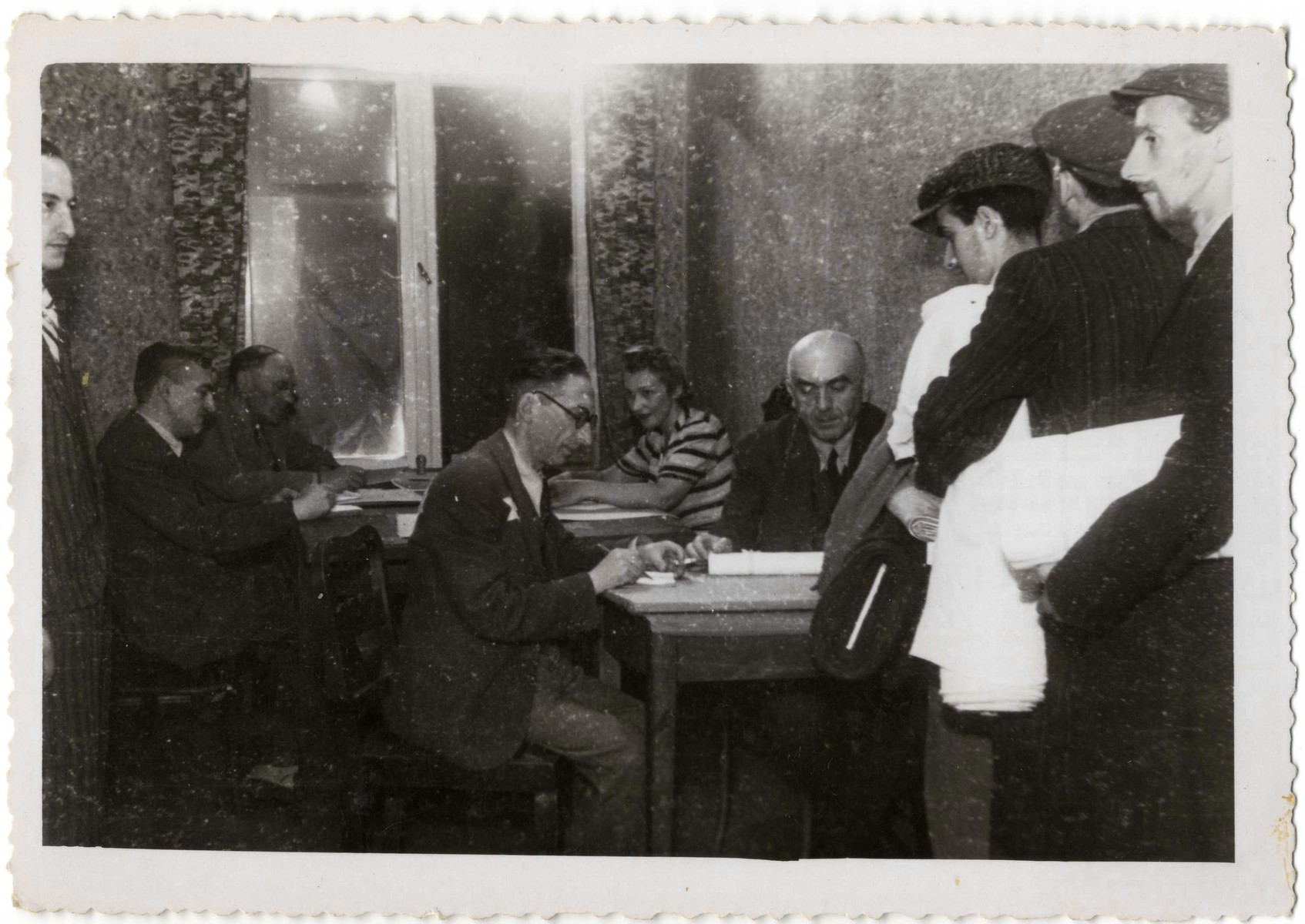 Employees of the Zentral Einkaufstelle, the central purchasing department of the ghetto, process the distribution of bolts of cloth.

Seated in the back left is Gustaw Gerson, the director of the Einkaufstelle. Seated directly behind him is Dawid Warszawski, head of the textile workshops.

Biography
Inka Allen (born Malwina Gerson) is the daughter of Gustaw Gerson and Dora Stillerman Gerson. She was born on March 17, 1929 in Lodz where her father was a textile engineer and manufacturer of high quality cotton fabrics. The family lived a cultured, middle class life. They spoke Polish, Russian and German at home. (Both of Gustaw's parents, who came from Latvia spoke German). Gustaw was born in Warsaw, but his family moved to Lodz shortly thereafter. He had three younger siblings, Leon, Gerda and Wila. Dora had one brother Samuel (Mula). She was born in Lodz and lived there until 1914 when, in order to avoid the war, the family moved to Moscow to join Dora's relatives there. (Both of Dora's parents came originally from Belarus). Dora's father was imprisoned for a year during the revolution, and died shortly after being released. In the 1920s the Soviet government, as a result of a peace accord, granted permission for Polish citizens to leave the Soviet Union and return to Poland. Dora's mother and her two children decided to return to Lodz, and on the train Dora met Gustaw. He had also had been living in Moscow since 1914 and for a couple of years studied at the business school there. They married in Lodz on April 7, 1925. Gustaw had a cousin, Dr. Robert Herzenberg, who studied in Germany, was a mining engineer, a mineralogist, and an analytical chemist. In 1929 he immigrated to Bolivia, where he became the head of an analytical chemistry laboratory for the Hochschild mines. During a visit back to Europe he met and married Gerda. She returned to Bolivia with him and later brought over her younger sister Wila. They also encouraged Gustaw to immigrate as well, but he felt that he had a good business and a comfortable life in Lodz, and did not want to leave. The same was true of Gustaw's brother Leon.

Inka had a very happy childhood, surrounded by a loving family. She had toys, books, lots of clothes a sunny, cheerful room, a canary. She went to kindergarten for perhaps three years, then was enrolled in Eliza Orzeszkowa, a private girls school, starting with second grade. The school was one of the best in town, small classes and quite progressive - as early as fourth grade, different teachers taught different subjects. She had a nanny when she was little, a live-in housekeeper (Dora helped Gustaw in his business) and, starting around age eight, a German "Fräulein" (governess) who picked her up from school five days/week and spent a few hours with her teaching her German. She went to gymnastics classes, to the library, ice skating in winter, visiting friends. Summers were spent away from the city - in a rented house in the country when she was little, later on in various resorts, on the Baltic Sea, in the mountains, and in children's camps. She was exposed to classical music at home and, by the time she was nine, went to symphony concerts and ballet. In winter of 1938 her parents took her along to Riga, Latvia, to visit Gustaw's family there.

The Germans invaded Poland on September 1, 1939, and Lodz fell in a few days. Dora's brother Samuel (Mula) fled to Lwow with his family, and Gustaw's brother Leo went to Warsaw with his wife Marysia. In spite of requests by both Mula and Leo to join them, Gustaw did not want to leave. Thus Inka's family remained in Lodz. Restrictions against Jews started within a couple of weeks. They were not allowed to cross the main street, Inka could not go her pre-war school, and yellow stars of David had to be worn on the outer clothing. In November the Gersons were ordered to leave their apartment; they first moved into a couple of rooms in a house nearby and then to the Ghetto together with Inka's maternal grandmother, Bertha Stillerman , in January 1940. The four lived in a single room, without running water (the pipes froze and cracked the first winter) and very little heat. During the first year of the Ghetto, the Gersons could still receive mail and packages from their relatives in Bolivia and Russia (from Mula, who was in Lwow), also letters from Leo and Marysia (who were in the Warsaw Ghetto). That stopped by 1941, when Germany invaded Russia. At first, Inka was able to attend school in the Ghetto; the language of instruction was Polish but she had to take classes in Hebrew and Judaism in addition to the standard subjects for the 6th grade. Any subjects relating to Poland were forbidden. The school lasted for a year. Afterwards she, like everyone else, was sent to work in various workshops. Her first job was in the Hutabteilung (hat division) where she made artificial flowers; later she moved the Strikereiabteilung (knitting division) where she knitted large, elaborate tablecloths, sweaters for German women, and also made macramé bags (out of string) for German soldiers. Her mother Dora worked in the office of the rag sorting workshop and her father managed the Zentral Einkaufsstelle - literally Central Purchasing Place, where Ghetto inhabitants could sell their belongings for Ghetto money. The department was also in charge of purchasing some supplies for the Ghetto workshops. The work hours were from 7:30 am to 8 pm Monday-Friday, with a short break for lunch, from 7:30 to 2 on Saturday, and Sundays were free. Like all Ghetto residents, the family suffered from disease and malnutrition, leading to the death of Dora's mother, Bertha Stillerman, in 1942.

During the summer of 1944, the Germans decided to liquidate the Lodz Ghetto and deport the inhabitants to Auschwitz. However, they left behind a skeletal crew of approximately 870 Jews to pack up the Ghetto to send the remaining goods to Germany. Since Gustaw spoke perfect German and since he was a trained textile engineer who would know what to do with the machinery and cloth that were left behind in the workshops, the Germans told him to stay. Inka and Dora were allowed to remain with him. The Germans established a camp within the Ghetto in one of the workshops on Jakuba St. Early each morning everyone assembled for a roll call in the yard, and people were divided into work groups. At first, the women went through abandoned apartments, packing up what seemed in reasonable conditions, while the men started dismantling workshops. Later everyone worked packing up stuff from the workshops. At night the gates to the camp were locked. The Germans were planning to kill all the camp prisoners when they were of no further use, and had the prisoners dig mass graves at the Jewish cemetery. However, the Russian army approached Lodz faster than the Germans expected - it became evident to everyone that it was only a question of days. One evening, the word came down to the camp that the inmates would be executed the following day. Somehow, the camp "managers" succeeded in keeping the gates open, and told everyone to flee and hide somewhere within the Ghetto. Everybody left. Inka and her parents found an old, small, dilapidated wooden house, went up to the second floor, and stayed there for two-three days. They could hear sounds of fighting, and also of the Germans looking for the hidden Jews. Then all became quiet. Gustaw decided to go out and look, and the next thing Inka remembers is her friend, Janka Weinberg (now Raplewska), running up the stairs screaming "why are you still sitting here, the Russians are here and we are saved!"

Inka and her family were liberated on January 17, 1945, with all the camp inhabitants. Dora met two cousins who were serving with the Russian army and through them cabled Bolivia to tell the Herzenbergs that Gustaw and family had survived. The Gersons remained in Lodz for the next year and a half while preparing to join their relatives in Bolivia. Dora worked for Dr. Philip Friedman who was investigating Nazi anti-Jewish atrocities and also for TOZ, a health and welfare organization. Inka went to school which reopened in February, and had special sessions covering the equivalent of ten months in five (schools in Lodz outside the Ghetto were also limited or non-existent during the occupation). In June 1946 the family left for Sweden where a cousin of Dr. Robert Herzenberg by the same name greeted them. They stayed in Sweden for several weeks and then sailed to Bolivia via England and Panama. Inka finished high school in Bolivia and also attended a local technical college. However, her Uncle Robert Herzenberg felt that the local college could not adequately provide for her education and arranged for her to go to MIT to continue her studies. Inka left Bolivia in September 1949. At MIT she met Steven Allen (originally Margulies), born in Vienna, whose family succeeded escaping Hitler's Austria via England, arriving in the US in 1940. They married in 1951, continued their studies, obtained doctorates from MIT (Inka in chemistry, Steve in metallurgy) and became parents of two. They continued to live in the greater Boston area, Steve worked in materials science research and development, Inka became a college professor and taught chemistry for thirty years. Currently (January 2007) both are retired, live in a Boston suburb, are busy with personal and volunteer activities and, among others, are enjoying their six grandchildren and a great grandchild.

Though Inka and her parents survived, Gustaw's brother and wife, who fled to Warsaw at the start of the war, both perished. Dora's brother Mula and family managed to make their way to Hungary. However, Mula was killed in Budapest on the last day of the occupation. His wife Betty, and daughter Janka, survived and immigrated to Israel.