Group portrait of members of the Gordonia Zionist youth movement on the steps of the Palais de Justice in Brussels. 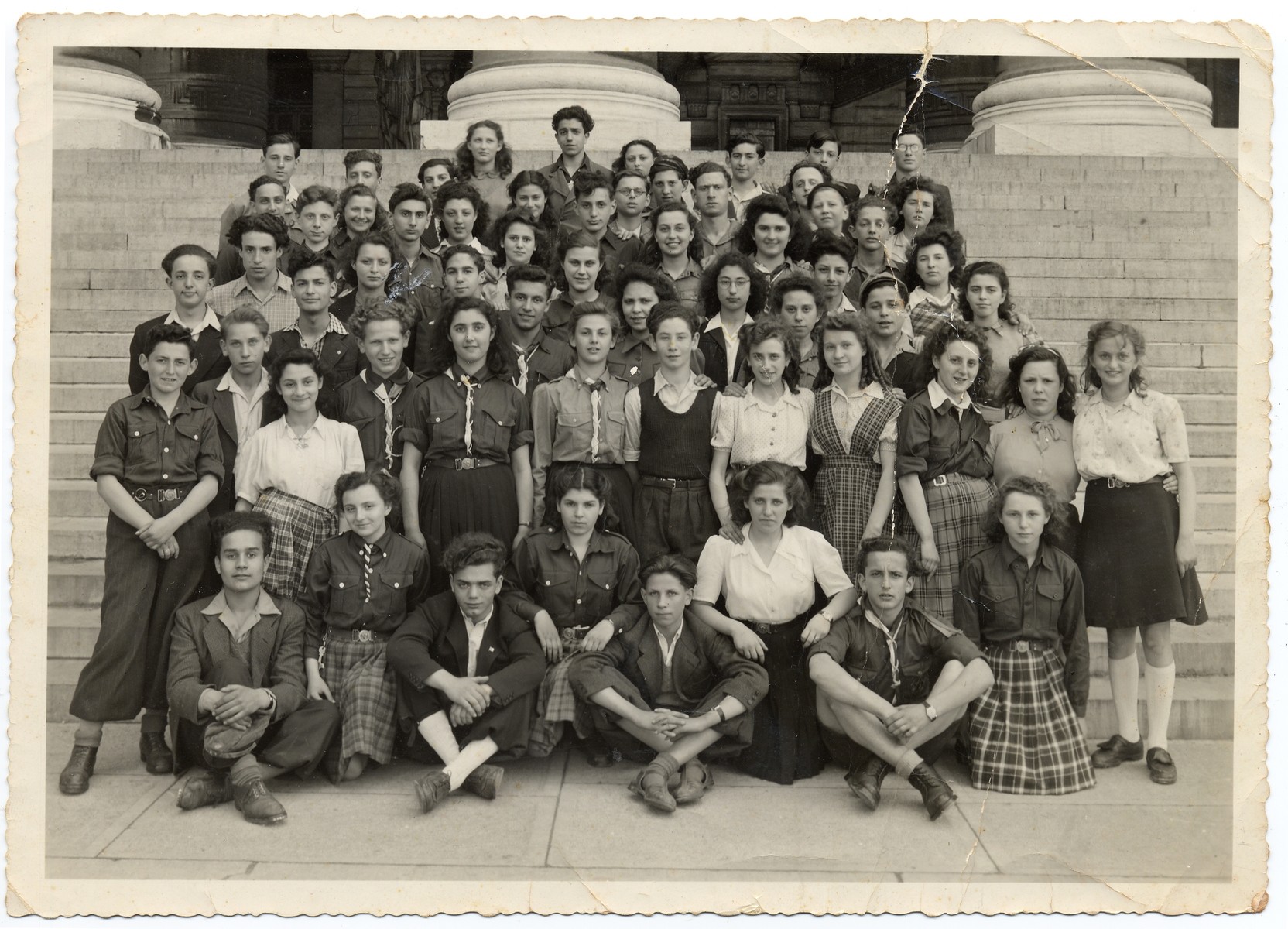 Group portrait of members of the Gordonia Zionist youth movement on the steps of the Palais de Justice in Brussels.

Esther Baczynski, the donor's wife, was the leader of this group and is pictured standing third from right in the third row from the bottom.

Biography
Josef Eliezer Horowitz is the son of Chaim Leib Horowitz, a rubber stamp engraver, and Fela Leser Horowitz. Josef was born on December 17, 1925 in Krakow, and his younger sister Dola was born on July 4, 1929. After the German occupation of Poland the extended family was incarcerated in the Krakow ghetto. In 1941 half of the family, managed to relocate to the Bochnia ghetto, while Josef's immediate family remained in Krakow. Chaim continued his work manufacturing rubber stamps assisted by Josef. In June 1942, the Germans conducted an "Aktion" in the Krakow ghetto deporting some 6,000 Jews to the Belzec extermination camp including Josef's grandfather, Izaak Horowitz. Sometime in the winter 1942/1943 two Jewish men arrived in Chaim's store. They had a sample of a Notary Public certified copy of an American affidavit, sent many years before the war, from the US to Poland. In addition they had an American typewriter and three sheets of foreign made paper. They asked Chaim to prepare an embossed stamp of an American notary public. He agreed to manufacture two from New York for the two men, as well as a third for his family from Philadelphia. The Horowitz affidavit allegedly was sent from Izaak Horowitz (who in reality had been already killed in Belzec) to his wife and children, so they could join him. They used the real address of Izaak's brother, who indeed had immigrated to Philadelphia many years before. The paper had to appear old, as if it was written in 1905 and confirmed in 1921 by a Notary Public in the US. This document was translated into German, and a Polish translator and a Notary Public confirmed that the translation was accurate; this provided the document's first authentic stamp. The document was then sent to a German court which approved the notary public's stamp. Josef finally obtained a Gestapo stamp of approval. The approval documents included a statement that the bearers were foreign citizens. As a result, Josef's family was spared the deportations from Krakow. Instead they were briefly incarcerated in the Montelupich jail and then transferred to Bochnia where they were allowed to join the rest of their family. However, on July 12, 1943 the whole family was put on a passenger train to Celle and Bergen Belsen where they were housed in a special camp "Sonderlager" for foreign citizens. On April 7, 1945 the Horowitz family and other Jews were loaded onto a train from Bergen Belsen headed to Theresienstadt. The train was finally liberated by the 9th US Army on April 13, 1945, not far from Magdeburg. The Horowitz family stayed in a small town, Hillersleben, until they moved to Liege, Belgium in June 1945. Dola and her parents settled in Brussels, and Josef went to a DP camp for Poles, where he served as a liaison between the DPs and the American and Belgian authorities. After the camp dismantled, Josef moved to Brussels, where he completed his high school studies, became a youth leader in the Zionist youth group "Gordonia" and helped organize illegal immigration to Palestine. The Horowitz family managed to reach Palestine in 1947. In August 1950 Josef Horowitz married Esther Baczynski, whom he met in the Gordonia movement in Belgium. Josef and his sister Dola and their respective families live currently in Israel.