Group portrait of female and child prisoners standing and sitting outside a barrack in the Kraljevica concentration camp. 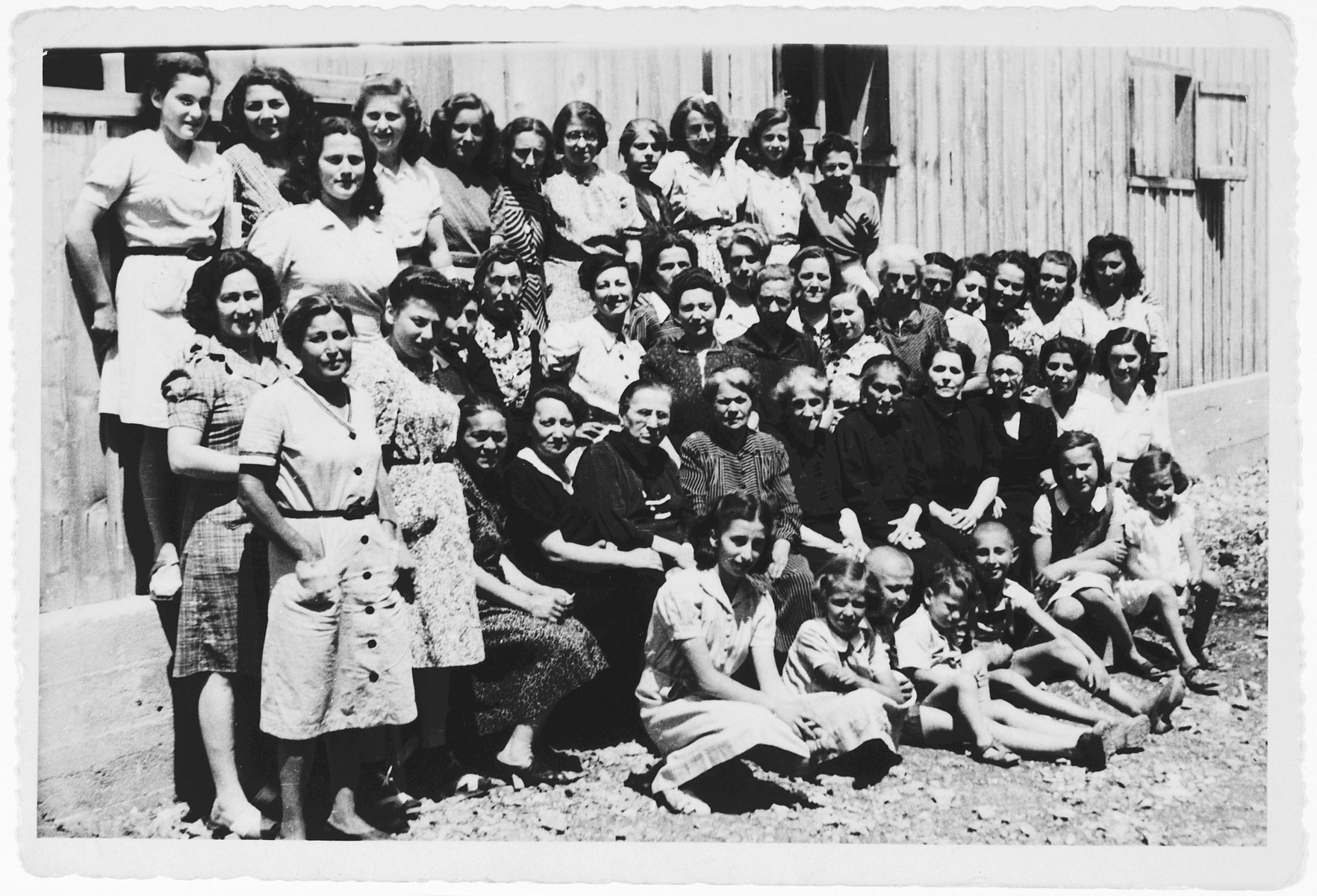 Group portrait of female and child prisoners standing and sitting outside a barrack in the Kraljevica concentration camp.

Among those pictured are Nada and Lea Gostl, school friends of the donor. Also pictured are Mira and Zora Mahler and their mother, Luisa Mahler.

Biography
Stanka Lapter (born Stanka Weinrebe) is the daughter of Zlatko Weinrebe (b. 1896) and Zora Weinrebe (b. 1905), nee Benedik. She was born in Ludbreg Croatia on November 8, 1933. Her older sister, Mira, was born on October 31, 1926. Stanka's father owned a large hardware and building materials store. Her mother grew up in Kriz, a small village 50 kilometers from Zagreb. She had studied to be a school teacher but after marrying helped her husband run the business. With the establishment of the Independent State of Croatia (NDH) they lost their properties, and on July 22, 1941 they were arrested together with all the Jews of Ludbreg under the age of 65. Stanka's grandmother, Ana Weinrebe, escaped deportation only to be arrested the following year. Stanka, who was then only seven and a half years old, and her immediate family were incarcerated in an Ustasa prison in Zagreb for a fortnight. Then through a connection they were granted permission to leave for the coastal part of Croatia, then under Italian occupation. The Weinrebes lived in the coastal town Crikvenica from the late summer of 1941 to November 2, 1942. Then the Italian authorities interned all the Jews under their jurisdiction in a concentration camp in Kraljevica, also on the coast. Later they were transferred to the isle of Rab, a bigger and worse camp. However, Stanka was able to attend school while in camp. After the capitulation of the Italian forces in September 1943, partisans came to the island and transported the prisoners to liberated territory inland. Stanka and her family lived there until the end of the war and returned to Ludbreg in the summer of 1945. Zlatko's business was returned to him. However, less than three years later the Communists confiscated it.

Though Stanka and her immediate family survived, much of her extended family perished including her maternal grandmother, Rosa Benedik and her mother's three siblings -- Irena Deucht, Gizela Stecher and Joseph Benedik - and their spouses. They were all arrested in either 1942 or 1943 and never returned. Only one Aunt Victoria survived because she and her family fled to the Dalmatian coast and joined the partisans. Her paternal grandmother, Ana Weinrebe, also perished. Her father's brother Mirko Weinrebe survived the war in a POW camp in Germany. After the war he joined his wife Ivka (nee Lausch) and daughter Dana in Italy and immigrated to Palestine. In 1963 Stanka married Vladimir Lapter who had also been arrested in 1941 and incarcerated in the Kraljevica and Rab concentration camps.