Group portrait of the first Jewish policemen of the Lodz ghetto. 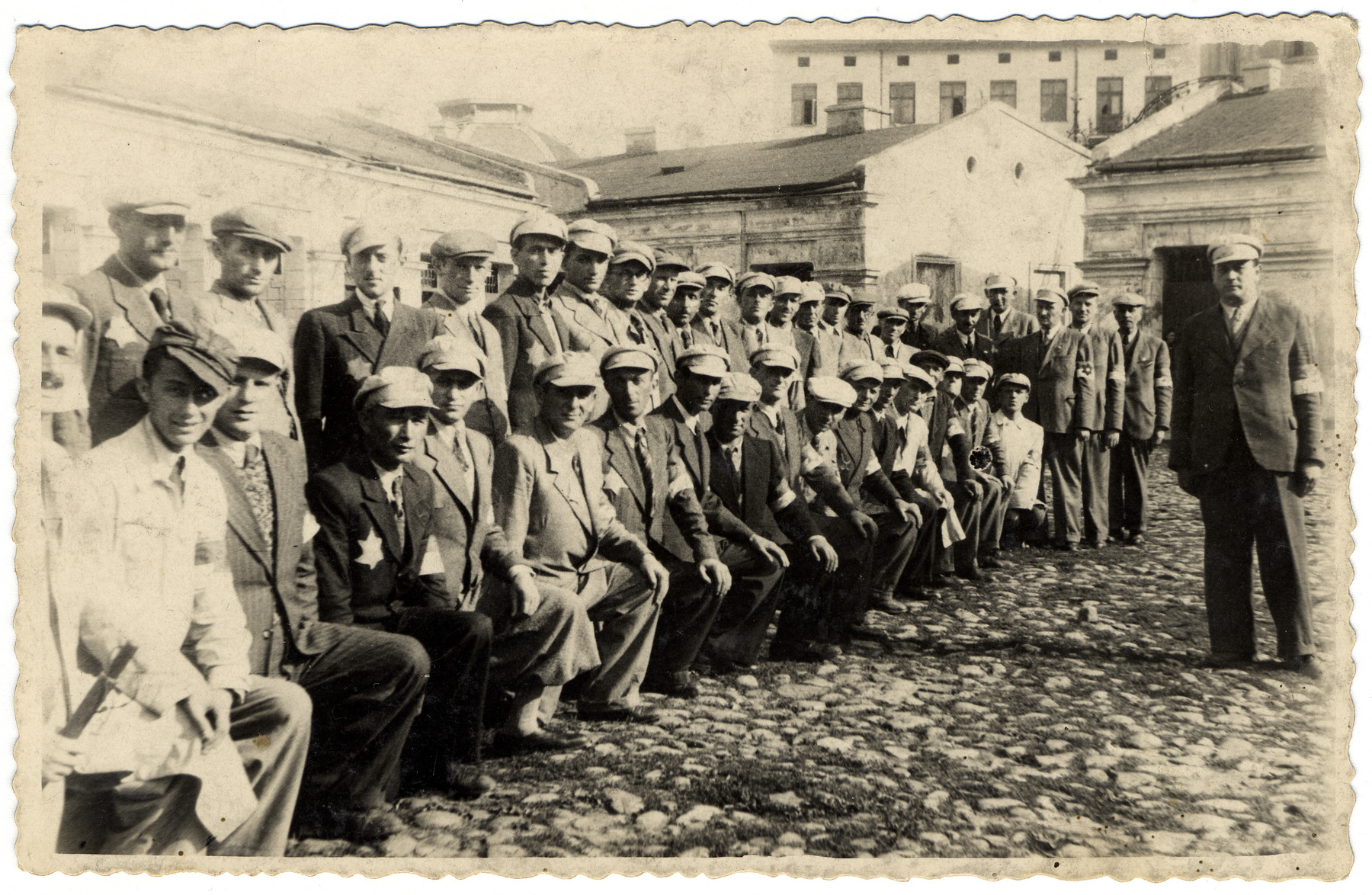 Group portrait of the first Jewish policemen of the Lodz ghetto.

Standing on the right is probably the commandant Abram Josef (Alfred) Chimowicz, who later became the head of the metal workshop and youth employment.

Biography
Alfred Chimowicz (born Abram Josef Chimowicz), an early Zionist, was born in Lodz in October 1902. After the German invasion of Poland, the family separated in the hopes that one of the two locations would provide better conditions. His mother, Sura Rosja (nee Koppel) perished in Stutthof. His father, Jacob, perished in Warsaw. Abram Josef remained in Lodz. He came from a family of metalworkers, and he lobbied for the creation of a metal factory in the ghetto. The workshop on 63 Lagiewnicka eventually employed 500 metalworkers. Abram Josef was the head of a group of metal workers, termed Metal Workers #1, and they were the last group to leave Lodz. The group went from Lodz to Auschwitz in August 1944 and then to Stutthof on September 3, 1944. A segment of the group died or was killed along the way, but some survived the bombing of Dresden at the site of the slave labor factory at Schandauerstrasse 68 in February 1945. On September 10, 1944, Pessa and her three boys (Leo's wife and children) were transferred back to Auschwitz. It is unclear whether Hermann's wife, Silvia, and daugher, Eugenia, went with Pessa, but it is most likely that they were also transported back to Auschwitz. Some laborers also survived a death march to Theresienstadt, including Abram Josef, his youngest brother Leo (Israel Lajzer), and his other brother Hersch (Hermann). Abram Josef was liberated from Theresienstadt by the Russians in May 1945. His daughter Jetta and son Max survived the war, as did his wife Sofia. Leo disappeared soon after liberation of Theresienstadt; he had lost his wife Pessy (Pessa) and his three young sons, Abram Josef, Meyer, and Isaac who was still an infant in Auschwitz in September 1944. Abram's other brother, Hersch (Hermann) lost his wife Silvia and daughter Eugenia (Genia), most likely at Auschwitz or Stutthof in September 1944. After the war he immigrated to the United States. Abram Josef's sister Cilla Glicenstain and her three children, Maxy, Bella, and Gitla, lived in Warsaw and perished at Treblinka. Two other sisters, Eva and Regina, survived; Eva immigrated to Israel with her daugher, Bella, who also survived, while Regina immigrated to the United States. Regina's daughter, Fanny, survived and her two sons were thought to have perished. However, while Regina was living in the U.S., she learned that one of her sons had survived and was found living in Siberia. Abram Josef moved to the United States after the war and died in 1963.