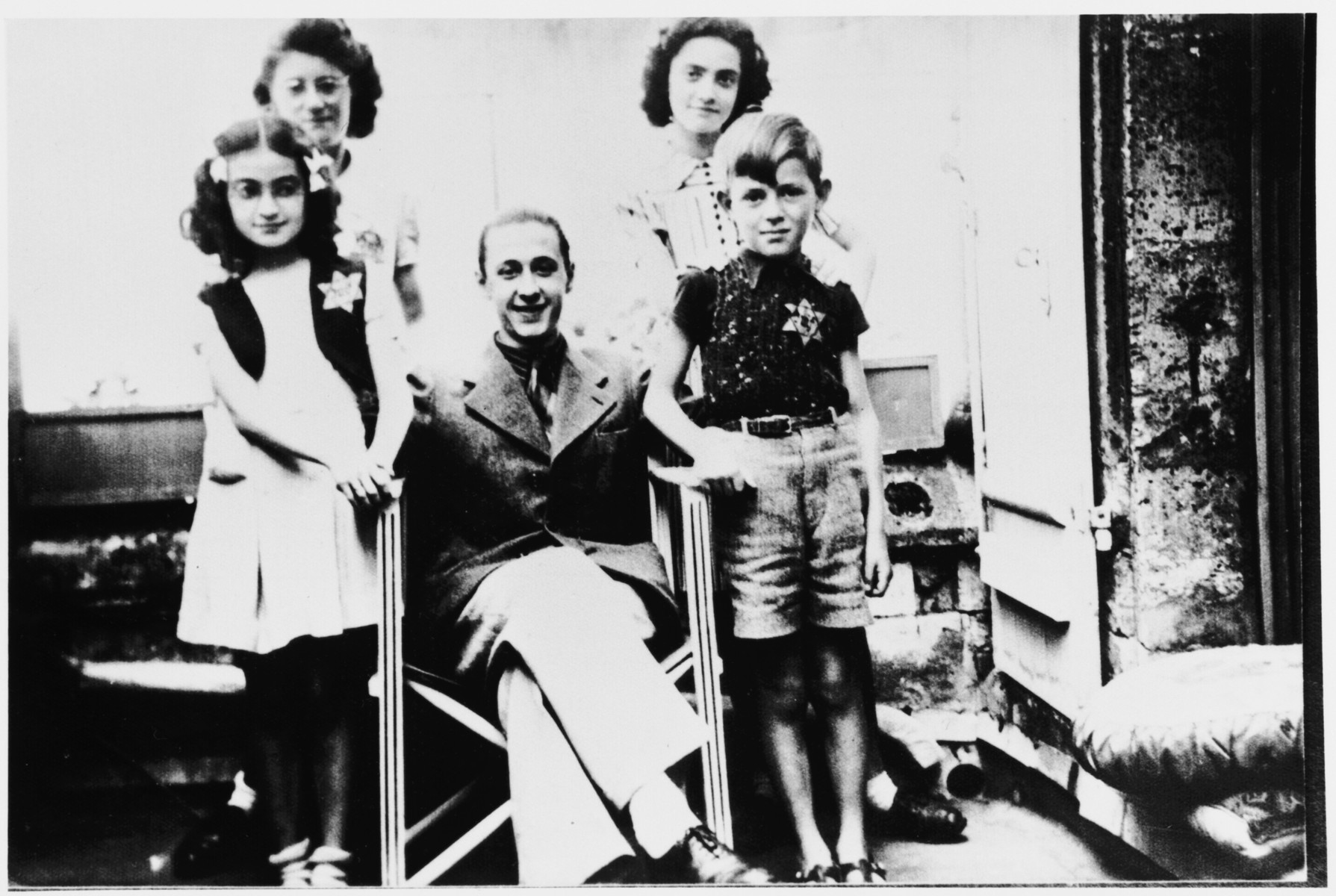 Among those pictured are Paulette and Ruth Apfel and Roger Vinnitsky.

Biography
Ruth Apfel is the daughter of Samuel (Shmuel) Apfel and Fanny Berger. Samuel, a synagogue cantor, was born on June 17, 1902 in Ranizow Poland, and Fanny was born in Bedzin Poland on July 28, 1904. Shortly after World War I, Samuel Apfel immigrated to Strasbourg where he met Fanny Berger, who had come to live with her brother, a conservative rabbi. They married in Strasbourg in 1928. Samuel supplemented his income by also working as a salesman. In 1929 Fanny, temporarily returned to Poland to give birth to their first child. Ruth was born on March 3, 1929 in Bedzin, Poland. The family left Strasbourg a few years later and moved first to Sedon and then to Metz. Fanny gave birth to a second daughter Paulette on October 24, 1932 in Metz. On May 10, 1940 Germany invaded France. Fanny and her two daughters together with her sister-in-law Marie with her young daughter Regine (b. August 17, 1936) fled south to Angouleme, a city in southwest France near Bordeaux. Samuel joined them about a month later. They rented a beautiful cottage, and as refugees, they received monetary aid from the municipality. Ruth attended high school and also a music conservatory. Her father went by bicycle to nearby farms to work in exchange for food. In July 1942 the French police arrested Samuel at the border of the Free zone since he had not yet become a naturalized French citizen. He was brought to a labor camp close to the border. Six months later, an uncle managed to get him out of camp in order to work as a farmhand, and he rejoined the family. At about the same time, a priest overheard Ruth playing the piano and offered the family use of his uncle's cottage and piano for Ruth. All the neighbors could hear her practice. A neighbor Mme. Paul, whose brother lived in the Free Zone, offered to help Ruth and Paulette get there. They decided that during one of her brother's visits he would take Ruth and Paulette in a small truck used to deliver milk. Paulette and her cousin Regine successfully crossed the border, but Mme. Paul's brother did not return for some time afterwards. Just when it seemed that it had become too dangerous to wait any longer and Ruth made alternate plans to travel with her mother by train, the brother returned. He showed up with his daughter in a car which was filled with flowers. When they arrived at the check post, he explained he was bringing the flowers for a year-end celebration, and they, Ruth included, were able to pass. She was taken to a small mansion and greeted warmly by a woman who even provided her with a grand piano. About a week later Ruth and Paulette boarded a bus and came to a village to reunite with her mother, Aunt Marie and Regine. The following day they traveled separately to a small village near Le Puy en Velay where Fanny's brother had decided was a good place to hide. There, Fanny gave birth to a third daughter, Germaine, on May 30, 1943. The Apfels remained in Le Puy until the end of the war. After liberation they returned to Metz. Ruth finished her high school diploma, and after briefly studying dentistry in Nancy, she continued her musical study and graduated from conservatory.