Close-up portrait of a young man in the Bedzin ghetto. 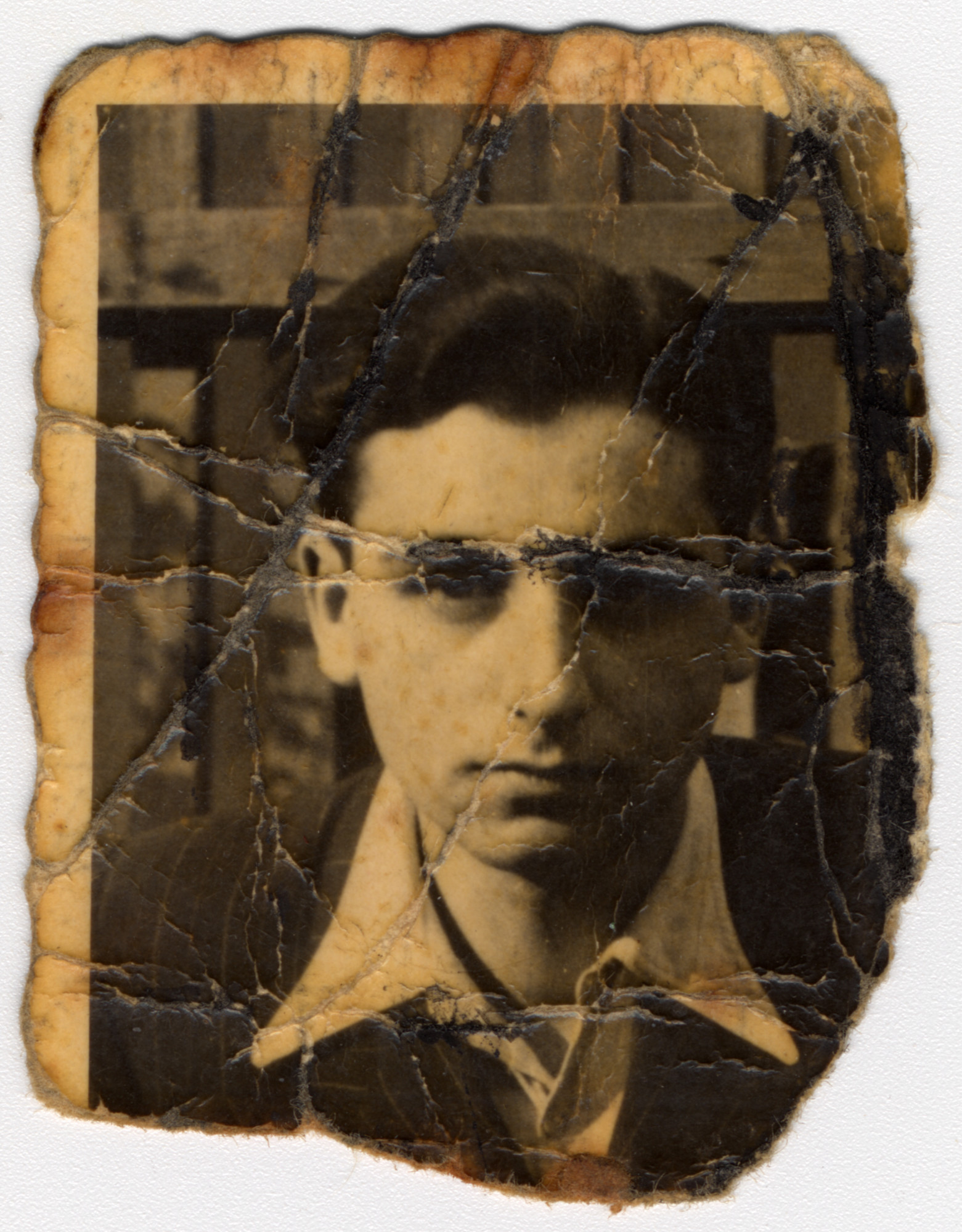 Close-up portrait of a young man in the Bedzin ghetto.

Pictured is Alex Lieberman, donor's brother-in-law. The portrait was found in "Kanada" section in Birkenau in 1944 and brought to his mother, Rosa Lieberman. Rosa hid this photograph in her mouth through every selection and search during her imprisonment in Birkenau, and she later carried it with her on death marches to Ravensbrueck and Neustadt-Gleve.

Biography
Emanuel (Munio) Maximilian Shiber is the son of Samuel Schiber, the owner of a textile workshop, and Adela Nachtigal Schiber. He was born in Lvov, Poland on December 27, 1919 and had four siblings: Liber, born in 1913, Gusta, born in 1915, Salomon, born in 1922 and Matylda, born in 1926. Liber and Gusta immigrated to Palestine in the thirties. Liber tried to convince the rest of the family also to leave Poland and come to Palestine. He asked Munio to register for a tourist trip to Romania and then to take a ship from Constanza to Palestine. In August 1939 Munio tried to get to Romania, but his train was stopped on the Polish-Romanian border because of the general troop mobilization. Soon after, in September, the Soviets entered Lvov according to the Ribbentrop Molotov pact, and Munio was drafted into a Soviet military school in Kirovograd, where he was trained as an airborne gunner. After graduation, Munio served as a gunner in a Soviet artillery unit, and in 1943 he was transferred to the Polish Kosciuszko Army. In July 1944 his unit reached Lvov, and Munio learned that his parents and his youngest sister had been deported to the Belzec death camp. He also discovered that his brother Salomon had been arrested by the Soviets in May 1941 on charges of belonging to the illegal Zionist organization Betar and then murdered. Munio continued to advance westwards with his military unit and in October 1945 he reached Bydgoszcz. There he met 18 year-old Ella Lieberman whom he later married.

Ella Lieberman was born on July 29, 1927 in Berlin where her father Joshua was a furrier. Her mother Rosa was originally from Bedzin. In 1938 the Lieberman family was expelled from Germany, and they settled in Bedzin. The following year Germany invaded Poland, and in July 1940, they were confined to a ghetto. During the liquidation of the Bedzin ghetto in August 1943 Joshua Lieberman built a bunker in which the family and Leo, a young Jewish boy, hid for six weeks. Mr. Paluch, a Pole, brought them food and water under the protection of darkness. The family managed to avoid deportation until January 1944 at which time they were sent to Auschwitz-Birkenau. Ella's father was murdered in a gas chamber together with Leo, whom he refused to abandon. Alex, Ella's brother, was deported to Auschwitz-Birkenau earlier and killed on arrival. Ella and her mother were chosen for work. An SS guard learned that Ella could draw well, and he requested that she draw an image of his son from a photograph. This gained Ella a favorable position, and she was placed in the Union ammunition factory which protected her and her mother from further selections. In early January 1945 Ella and her mother were forced on a death march arriving on February 2, 1945 at Ravensbrueck. After six weeks, they were forced on another march, to Neustadt-Glove, a sub camp of Ravensbrueck. They were finally liberated by the Allies on May 2, 1945.

After their marriage Ella and Munio Shiber reached an UNRRA camp Enring in Germany and were reunited with Ella's sister, Bertha who had been deported to a labor camp in Germany. From there Ella, Munio and Rosa Lieberman went to France where they boarded the ship SS Ben Hecht bound for Palestine together with 600 other Jews. The British Navy did not let them land and transferred them to their ship "Empire", which brought them to Cyprus on March 12, 1947. The family remained in a transit camp in Cyprus until April 21, 1948, when they finally were able to enter Israel. Munio was immediately mobilized into the Israeli Army. After the Independence War, he worked for the Haifa Port police force while attending university. He graduated with a law degree in 1960. Ella Lieberman created 93 pencil drawings illustrating her experiences in the Bedzin ghetto, deportation to Auschwitz-Birkenau, death march and the liberation. The original drawings were donated to the Ghetto Fighters House in Israel. Four drawings, which Ella created during her imprisonment in Auschwitz, are part of the permanent holdings of the Auschwitz Museum in Poland. She died on March 2, 1998 in Haifa, Israel.