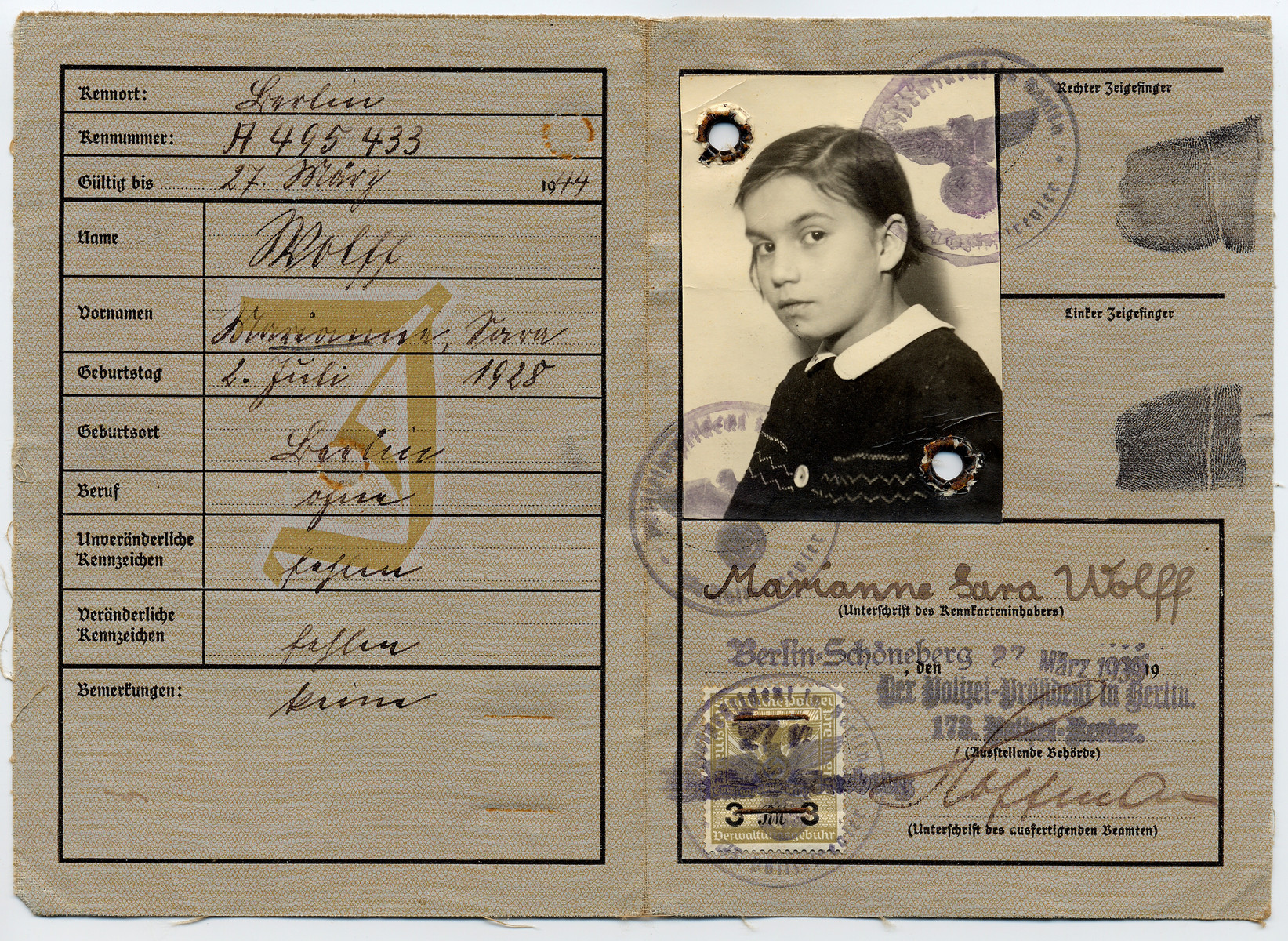 Biography
Marion Wolff (born Marion Freyer) is the younger daughter of Leo Freyer and Eva Lichtenstein Freyer. She was born on July 18, 1925 in Berlin, Germany. Her older sister Ulla (Ursula Brigitte) was born in 1921. From 1910 till the start of World War I, Marion's father worked in the office of a locomotive manufacturer in France. Eva Lichtenstein, Marion's mother, was the daughter of Max Lichtenstein, a prominent lawyer, member of the City Council of Koenigsberg, and a founder of the Kant Lodge of the B'nai B'rith. Leo and Eva married in 1920 and settled in Berlin where Leo opened a button and buckle factory. In the spring of 1938 Leo applied for a United States immigration visa for his family, and in November 1938 the American Consulate in Berlin placed them on a waiting list. Leo searched for a family member in the United States to issue an affidavit of support on their behalf. With the help of the National Council of Jewish Women in New York, he found a first cousin, Max Lindner in Cleveland. During the long and frustrating efforts to get through the bureaucratic maze of the US State Department, Leo unsuccessfully tried to obtain transit visas to England and Cuba. The US Consulate in Berlin initially accepted Max Lindner's affidavit only to reject it in December 1938 claiming that Mr. Lindner was too old to guarantee support for the Freyer family, since he was older than 65. Then Carlos Israels, Max Lindner's nephew, issued an additional affidavit, and in September 1939 the Freyer family finally received their German passports and permits to leave Germany. They left Berlin in November for Holland, where they boarded the SS Rotterdam; ten days later they arrived in the USA. After spending one month in a shelter run by the American Jewish Congress in New York, they settled in Baltimore. In early 1945 Marion read in the German Jewish newspaper "Aufbau" that her school friend Hans Bruno Wolff had arrived in the States, and she managed to locate him. While serving in the US Armed Forces (1945-1946) Hans Bruno changed his first name to John. Marion and John Wolff married in 1950. In 1958 the couple adopted a young girl, Rebecca, in Germany.