Close-up portrait of two young Jews living on the Aryan side of Warsaw and wearing suits made from German blankets. 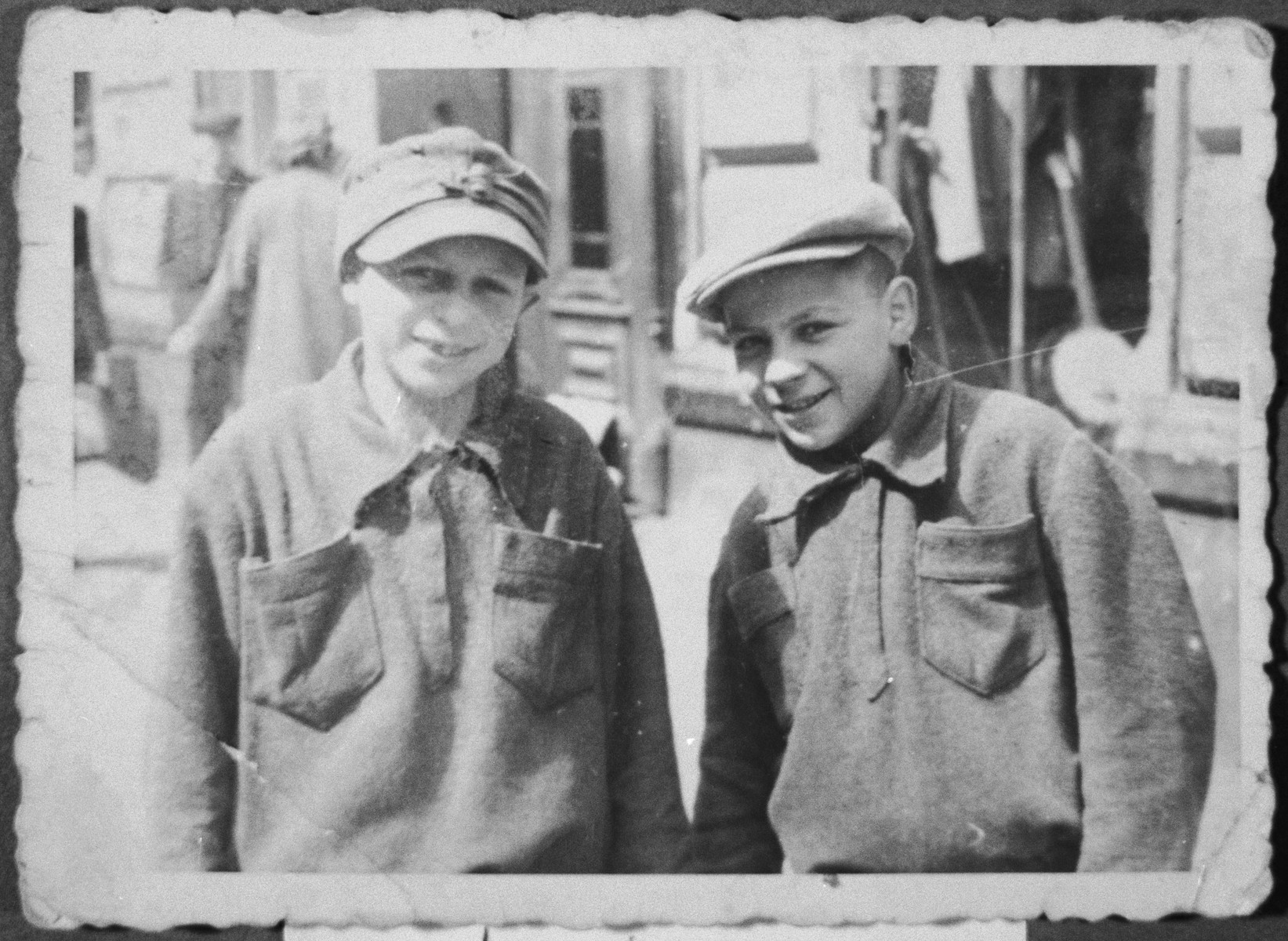 Close-up portrait of two young Jews living on the Aryan side of Warsaw and wearing suits made from German blankets.

Pictured is the donor and his brother Zenek.

Biography
Pawel (now Peretz) Hochman is the son of Benjamin (a prosperous leather tanner) and Miriam Hochman. He was born on April 16, 1927 and had five brothers: Falek, Yitzhak, Leon, Izik, and Zenek (b.1929). The family lived in Grochow, a suburb of Warsaw. When the war broke out the family moved to Warsaw because they hoped to be safer in the capital, but the following year, on October 2, 1940, with the establishment of the Warsaw Ghetto, they had to move again. Pawel's father died from starvation, and his brother Izik left the ghetto never to be seen again. Pawel and Zenek started to sneak out of the ghetto and sing Polish songs in the courtyards in exchange for food or money which they brought back to their mother before curfew. As conditions became even worse, Zenek and Pawel decided to remain on the Aryan side and support themselves by their singing. One day Zenek and Pawel met some young Jews who worked repairing tram lines. They became friends and started to trade food together in the ghetto. The boys were paid in clothes which they resold. Once Pawel went to a restaurant, and a Polish policeman who recognized him as a Jew, grabbed him by his collar and started to drag him to the police station. Pawel undid the buttons on his coat and slipped out of his hands, saving himself from certain death. The winter of 1943 was extremely cold, and as a result of sleeping on cold cement or in fields, Pawel contracted a bladder infection; he also incurred leg injuries from crossing the barbed wire fence around the ghetto walls. During the ghetto uprising, spring 1943, Zenek was caught and brought to the Umschlagplatz but managed to escape from the railway car as it pulled from the station. He escaped to the Aryan side through an opening and wandered around for two days before being reunited with Pawel. In the course of time the boys got to know several Polish women who helped them at great danger to themselves. One day Pawel and Zenek met a man named Ziemian who told them he was with the Jewish Underground and that he could help get them Aryan birth certificates. By the middle of 1944, the Jewish underground advised all Jews to leave Warsaw because an uprising might break out at any time. Pawel and Zenek instead elected to remain in the city, participate in the rebellion and join the Armia Krajowa, the Polish resistance. On August 1, 1944 the Polish uprising broke out. The brothers assisted using the skills they had acquired while smuggling food into the ghetto. The paper 'Fighting Warsaw' carried reports praising the boys for their heroism. At the end of August, Pawel and two fighters volunteered to blow up a German bunker and railroad tracks. After sixty-three days of intense fighting, the rebels surrendered. Zenek and Pawel were taken to Brokwitz, a camp used as an aircraft factory. Pawel was trained as a painter and Zenek as a fitter. They had to work long days, but they received reasonable food as well as monthly parcels from the Red Cross. One day, people learned that the boys were Jewish: they were threatened, beaten up and their Red Cross parcels were taken. On February 14, 1945 British and American bombers destroyed Dresden which was only a few kilometers away. When Pawel and Zenek saw the destruction they left the camp and wandered around for weeks until they saw the German surrender flags. On May 5 the first Soviet tanks liberated them, and the boys returned separately to Poland. Upon arriving in Warsaw, Pawel wandered the streets for days before one of his Polish acquaintances told him that his brother Leon had survived hidden by a Polish farmer. After his reunion with his brother, Leon told Pawel that their brother Zenek was now in a kibbutz in Cracow. Pawel decided to join him. Their cousin Falek was also there as were many people who had been in concentration camps or had returned from Siberia. Meanwhile the kibbutz was getting ready to immigrate to Palestine, and Pawel wrote Leon to come with them. When all was arranged they boarded a train towards the Czech-German border disguised as Greeks but they were caught and sent to different camps. Pawel and Leon eventually reached Marseilles and boarded a ship in Sete. The ship was however spotted and towed to Haifa. On July 1 they were taken ashore to the Atlit quarantine camp, and from there Pawel was sent to a Youth Aliyah group in Kibbutz Sha'ar Hagolan in the Golan Heights, and Leon to Kibbutz Negbah. In the meantime Zenek had organized another kibbutz in Europe and arrived finally to Palestine on the S.S. Yagur. On August 11 the ship was seized by the British and all were sent to Cyprus. After some time Zenek was released and joined Pawel at his kibbutz.