HIAS (Hebrew Immigrant Aid Society) tag worn by Susan Warsinger (formerly Susi Hilsenrath) when she and her brother immigrated to the U.S. 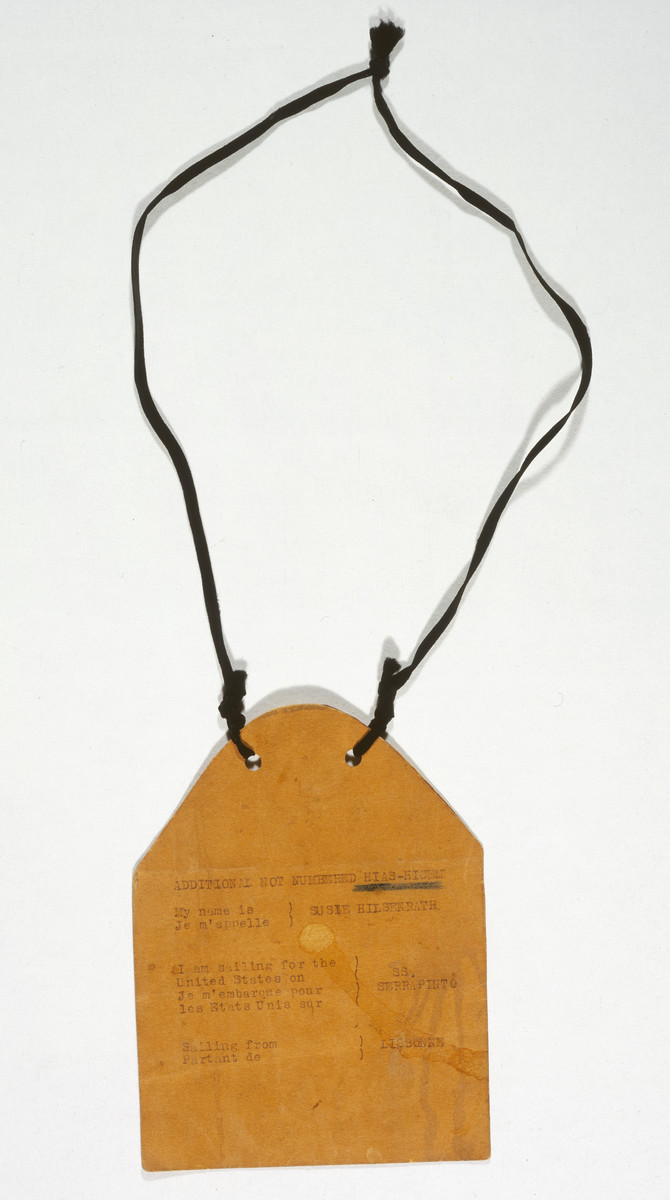 HIAS (Hebrew Immigrant Aid Society) tag worn by Susan Warsinger (formerly Susi Hilsenrath) when she and her brother immigrated to the U.S.

Biography
Susan Warsinger (born Susi Hilsenrath) is the daughter of Israel Hilsenrath and Annie Drimmer Hilsenrath. Susi was born on May 27, 1929, in Bad Kreuznach, Germany. The Hilsenraths lived in Bad Kreuznach, a city in western Germany with a Jewish community that dated back to the 13th century. Susi was the eldest of three children. Her father owned a thriving linen store, and her mother took care of Susi and her two brothers: Joseph, born in 1930, and Ernest, born in 1938.. After the Nazis came to power, the Hilsenraths, like other Jewish families, began to feel the effects of increased antisemitism. Susi was forced to leave the public school, along with the other Jewish children. Even walking on the streets could be dangerous because the neighborhood children often threw rocks at her. Susi's father had to close his business and sell fruit door-to-door to support his family. On November 9-10, 1938--Kristallnacht --Nazi thugs smashed the windows and furnishings of the Hilsenrath home. Months later, Susi and her brother Joseph were smuggled into France. IIn May 1940, the German army invaded France. Susi and Joseph were evacuated from a children's home in Paris to Versailles, where they were temporarily housed in Louis XIV's magnificent palace. Soon German soldiers arrived and the children fled with their guardians to the unoccupied part of the country controlled directly by the Vichy government. With the help of the Hebrew Immigrant Aid Society (HIAS), Susi and Joseph received permission to immigrate to the United States. Their father had previously immigrated to the States . He then brought over his wife and youngest son and asked HIAS for help bringing over his two older children. After crossing the Pyrenees into Spain, the two sailed from Lisbon, Portugal on the Serpa Pinto and arrived in New York on September 21, 1941. Susi and Joseph were reunited with their parents and younger brother in the United States. They settled in Washington, D.C.