Polish prisoners of war working on the Ackerman farm pose for a group portrait with one of their German guards. 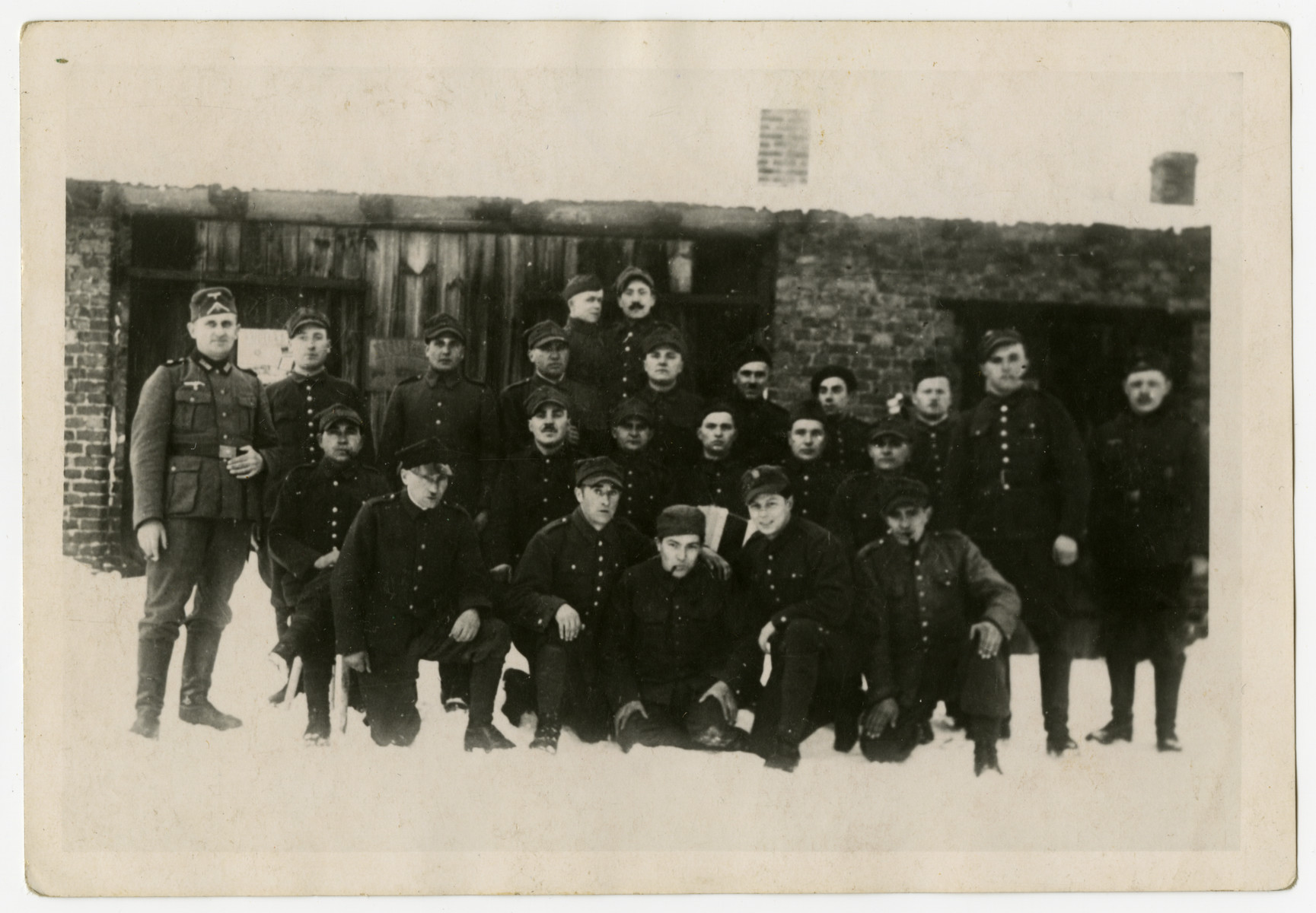 Polish prisoners of war working on the Ackerman farm pose for a group portrait with one of their German guards.

Biography
Helena Bronka Zybert (originally Chaja Bajla (Bronka) Hercberg) is the daughter of a tailor, Abram Adam Hercberg (b. 1877), and Ita Julia Judt Hercberg (b. 1888). Bronka was born on November 18, 1919 in Warsaw, Poland ; she had two siblings: Hela, born in 1905 and married to Adam Jungerman, and Mietek, born in 1916. Bronka's father died in 1923, and three years later her mother married Mordechai Rubinsztajn. He owned a tannery and had another daughter from a previous marriage, but he treated his new stepchildren like his own. Bronka fell in love with Zygmunt Zybert (b. 1916), from a deeply religious Polish Catholic family. In September 1939 Zygmunt, who has serving in the Polish army, was captured and imprisoned in POW Stalag IIIa in Luckenwald. Bronka remained in touch with him and his family, and in 1940 she became baptized. In November 1940 Bronka, her parents and sister were forced into the ghetto. Bronka's brother Mietek and Hela's husband Adam were in the Soviet Union. After his release from POW camp in December 1940, Zygmunt looked up Bronka and gave her false papers so she could leave the ghetto. A few months later Bronka's mother became very ill, and Bronka managed to enter the ghetto a few times to bring her food and to distribute baptismal certificates to friends. She tried to convince her sister Hela to flee the ghetto and save herself and her small daughter Rutka, but Hela refused because she felt secure being employed in the Schultze workshops in the ghetto. Bronka's mother died on November 1941. On July 10, 1942 Bronka married Zygmunt. The great deportations from the Warsaw ghetto to Treblinka death camp started just twelve days later. Rutka, Bronka's niece, who was only four years old, was caught and deported. Some months after that, Hela finally agreed to leave the ghetto. Bronka supplied her with a false Kennkarte and a hiding place near Warsaw. Bronka and her husband continued finding and hiding Jews and obtaining baptismal certificates for them. In June 1943 their son Andrzej was born and soon after a group of denouncers visited their apartment claiming that Bronka was Jewish. With the help of Zygmunt's parents, they avoided the immediate danger, but Bronka had to move to Miedzylesie outside of Warsaw. Zygmunt continued to work as a tram driver throughout the war until the Warsaw uprising in August 1944. After liberation the family remained in Warsaw, and in 1946 Bronka gave birth to a daughter, Jadwiga. In 1998 Zygmunt and his sister Jadwiga Hertman were awarded the title of Righteous among the Nations by Yad Vashem. Zygmunt died in 2000.