Three German or Austrian Jewish children living in Albania as refugees sit on the railing of a home. 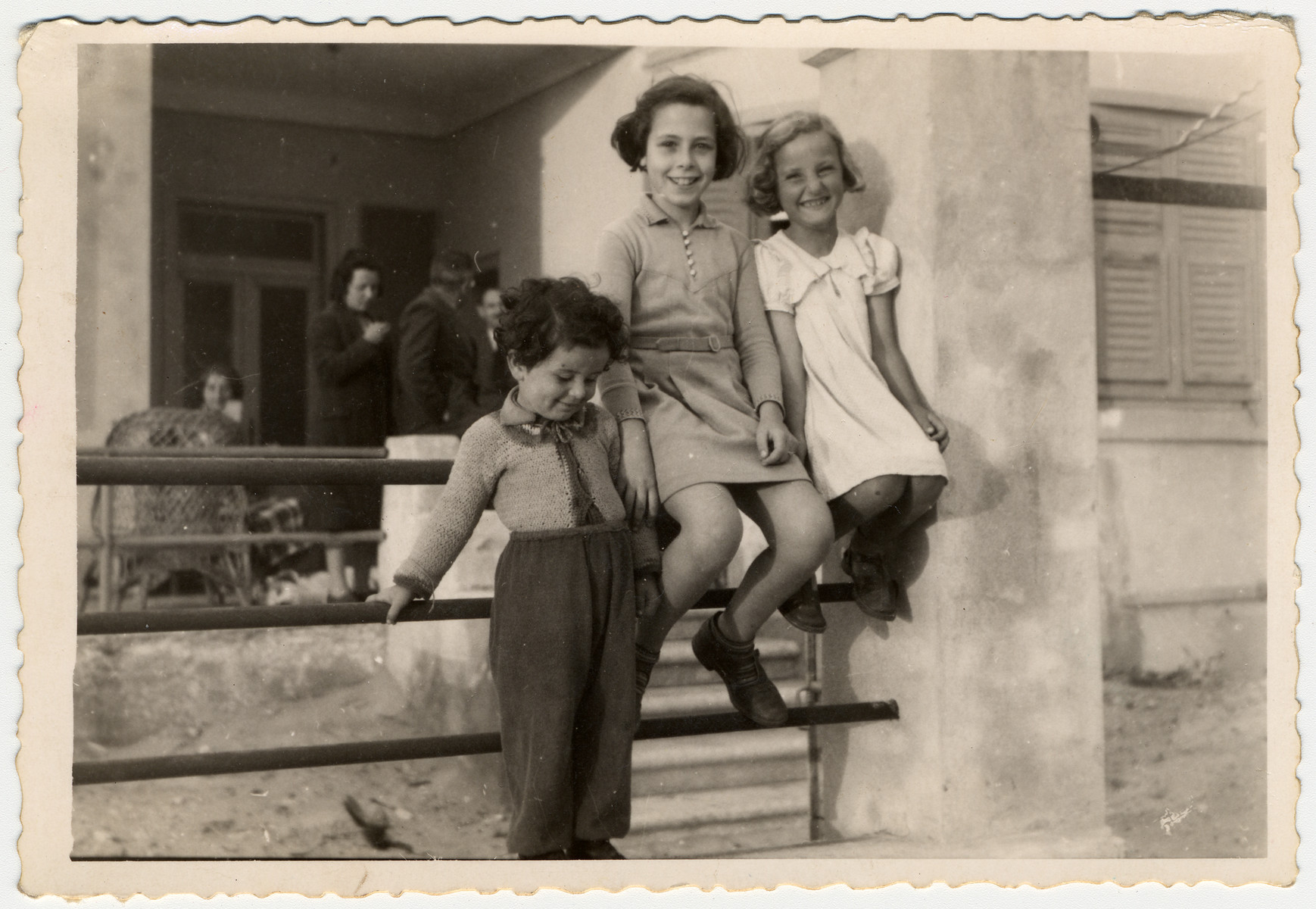 Three German or Austrian Jewish children living in Albania as refugees sit on the railing of a home.

Pictured in the center is Johanna Gerechter. Seated to her right is Trude Kraus. The woman on the left behind the chair is Finny Mandel and the man on the right is Hans Krahl.

Biography
Johanna Neumann (born Johanna Jutta Gerechter) is the daughter of Alice and Siegbert Gerechter. She was born on December 2, 1930 in Hamburg, Germany where her father was a merchant and manufacturer of work gloves. Her mother's family had lived there since 1763. Her mother's two sisters immigrated to the United States, and the Johanna's family also wanted to obtain American visas. However, as her father was born in Posen, the Americans considered him to be Polish and therefore gave him a much higher quota number than his wife and child. Therefore, they decided to stay in Germany as a family. They left Hamburg, Germany in March 1939 for Albania, along with their friends,the Meyers, another Jewish-German family. From the time of the Italian occupation, April 1939, until the German invasion in the summer of 1943, the Gerechters had private living quarters in the port city of Durazzo and were treated well by the Italians with the exception of a brief period during the Italian-Greek war (September 1940-1941) when they were moved to Berat, an internment city in the country's interior, not because they were Jews, but rather because they were "undesirable aliens". They returned to Durazzo and remained there until the German occupation in 1943. There they were helped by Njazi and Lizalotte Pilku. Though Lizalotte was herself German with Nazi sympathies, she still helped them and introduced the Gerechters as relatives from Germany. Njazi Pilku and their children were Moslems. In hiding parents supported themselves by doing laundry for Italian truck drivers. When the German army occupied Albania, they mined Durazzo in preparation for a possible Allied landing and evacuated all civilians. The Gerechters moved to Tirana, the capital city. During the war years, the Albanians never handed over lists of Jews to the Germans. Rather the government instructed the people to say that they didn't know any Jews, only Albanians. In fact King Zog wanted to give all the immigrants Albanian citizenship to help ensure their safety. In spite of this, which delayed the German process of finding Jews in the summer of 1944, they were registered for deportation. Johanna and her parents remained in Albania, fleeing from one town to another throughout the war until they were freed by partisans in autumn 1944. When the Communist partisans occupied the country in December 1944, they suspected everyone of collaborating with the Germans. Under the Communist regime it became particularly difficult for the Jews to obtain exit permits. They finally managed to leave through an Allied blackmail scheme. When an epidemic broke out the Communists needed Allied medical care and they agreed to issue exit visas for about 100 Jews in exchange for vaccines against typhoid and cholera. In 1945, Johanna and her family went to Italy where they lived in the Tricase Porto displaced persons camp. Here Johanna first came into contact with survivors from various concentration camps and realized what had happened elsewhere in Europe. In June 1946, Johanna and her mother left Italy for the U.S. Her father went to Rome, where he waited for his U.S. visa. He joined his family in the U.S. in 1947. In 1998 Yad Vashem recognized the Pilku family as Righteous Among the Nations.