Members of the Jewish Brigade gather at set tables for a festive meal. 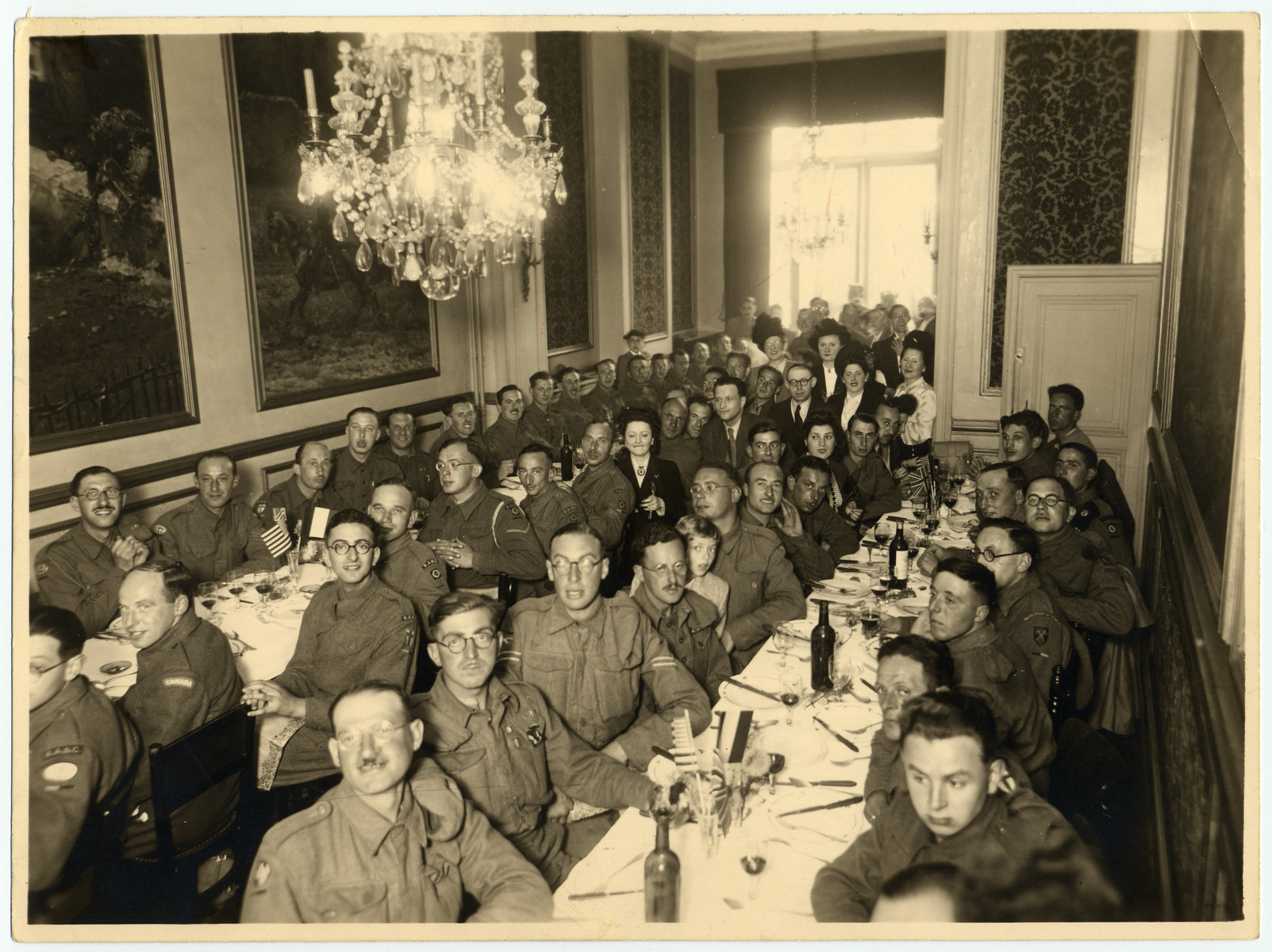 Members of the Jewish Brigade gather at set tables for a festive meal.

Fela Perelman is pictured in the middle.

Chaim and Fela (Felicie Liwer) Perelman were married on January 13, 1935 in Brussels. Their only daughter Noemi (later Mattis) was born the following year, in 1936. Chaim and Fela were both born in Poland and immigrated to Belgium. Chaim was born in Warsaw and came with his family to Antwerp in 1925. After attending high school in Antwerp, he graduated from the Free University of Brussels. In 1938 Chaim was appointed as lecturer in the faculty of Philosophy and Letters. Following the German invasion of Belgium on May 10, 1940 and the imposition of Nuremberg Laws, the rector of the University asked Chaim and four other Jewish faculty members to resign their posts. They refused as a matter of principle. Instead they agreed not to teach, while officially maintaining their affiliation and salary. Chaim used his earnings to subsidize other Jews who had gone into hiding. In July 1942, he and Fela helped found the "Comite de Defense des Juifs," the Jewish underground in Belgium, and both Perelmans spent the war working for the underground. The CDJ is credited with saving the lives of some 8,000 Jews. Operating under the alias "Dumont", Chaim organized several covert activities involving rescue and resistance. Fela, in particular, opened a kindergarten called "Nos Petits" in 1942, and when the school closed, worked to hide Jewish children. She was instrumental in the establishment of several Belgian refugee homes after the war, played an important role in the Aliyah Bet, and worked as a Mossad operative to assist Jews going to Palestine. In 1946 Chaim and Fela assisted 510 survivors in their attempt to immigrate illegally to Palestine on board the "Hebrew Soldier" which sailed from Antwerp harbor on July 31. After the founding of Israel, the Perelmans became ardent supporters and board members of Hebrew University in Jerusalem, founding "Les Amis Belges." They received honorary doctorates from Hebrew University, were appointed to the baronage in Belgium in 1983. Chaim, who after the war became the youngest full professor at the University of Belgium, has become known as one of the most influential postwar philosophers in the field of rhetoric and argumentation.