A German family poses outside its clothing store in East Prussia. 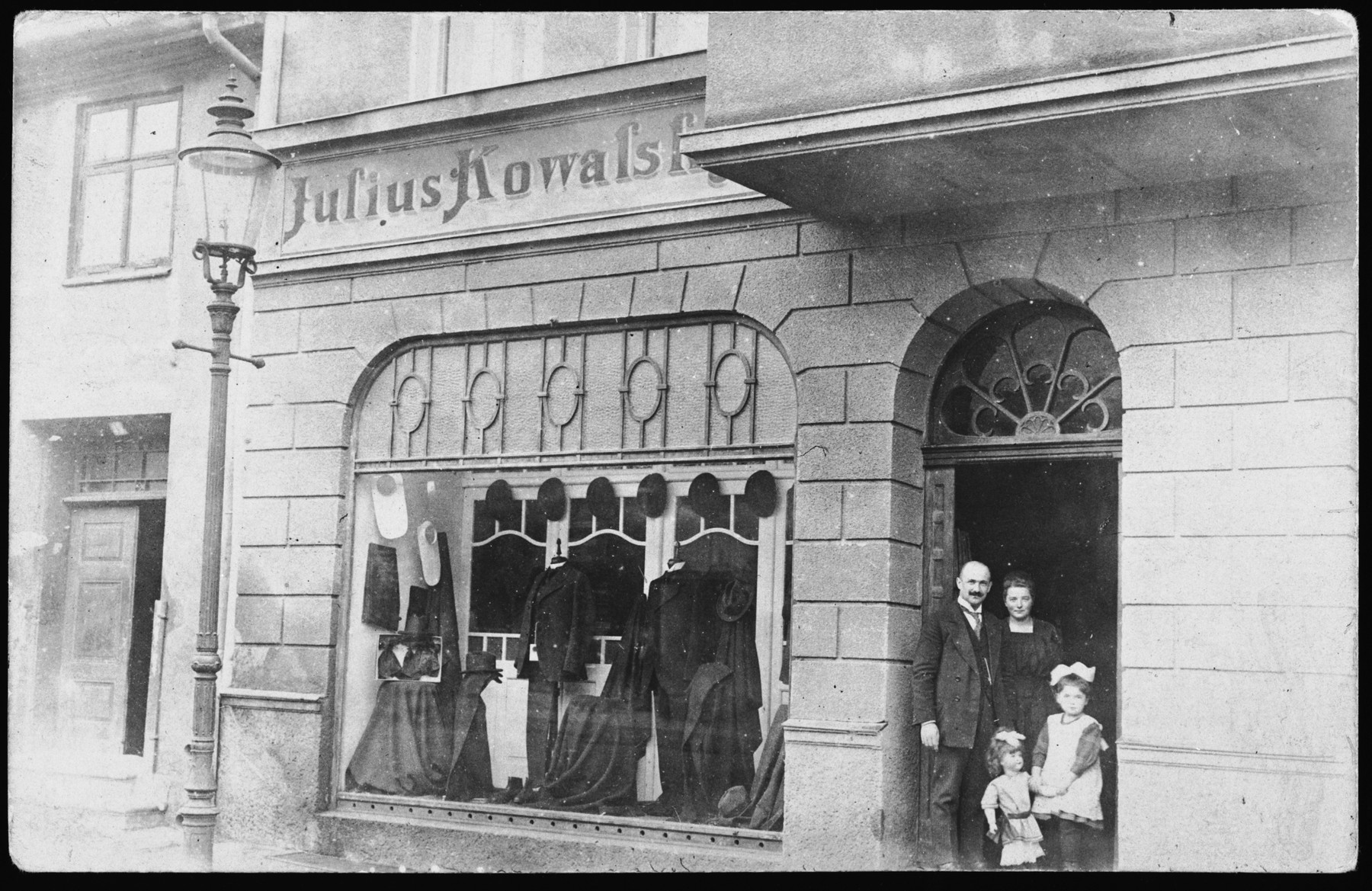 A German family poses outside its clothing store in East Prussia.

Pictured are Julius Kowalsky, his wife and daughter Gertrude (mother of the donor).

Biography
Ruth Grill (born Ruth Marion Rubenstein) is the daughter of Dr. Heinz Rubenstein and Gertrude Kowalsky Rubenstein. She was born on July 8, 1937 in Koenigsberg, Germany where her father was a physician. Her father was born on September 30, 1907 and her mother was born on September 28 1914. Starting in April 1933 Nazi laws curtailed the practices of Jewish physicians, and in September 1938 they prohibited Jewish physicians from treating non-Jews. Once Dr. Rubenstein had to flee the Gestapo while working in the hospital and on another occasion, one of his patients was arrested for consulting him. Ruth's father had to hide after Kristallnacht, and the family looked for ways to leave Germany. They tried to purchase passports to Brazil, but after these did not come through, they considered fleeing to France. However, after being warned they would be arrested if they went to France, they opted to go to Belgium. After the German invasion of Belgium in May 1940, Heinz was arrested and sent to Gurs, a camp in southern France. He was interned until 1941 when he managed to escape. When he returned, Ruth did not recognize him and called him uncle. In 1942 Ruth's father almost was arrested again but he jumped off their balcony and escaped. However, afterwards, he had to maintain a low profile since the Gestapo knew of him. Ruth's parents worried that someone would overhear her speaking German and decided to place her in hiding. They brought her to the Couvent Au Sacre Coeur. Ruth had not realized she would be left alone there and was terrified. Furthermore, she contracted measles, impetigo and bronchitis. Her parents came to visit after six weeks, discovered her deplorable condition and brought her back home. She remained at home for only a short while until her parents found her a new hiding place at the home of a childless Belgian couple named DeMarneff in the suburbs of Brussels. They were delighted to have a child and were extremely kind to Ruth. They pretended she was their niece from Italy although apparently the whole village knew she was Jewish. Ruth made friends with the other children in the village and enjoyed a normal childhood experience. Her parents, who were hiding in a series of different places in Brussels, visited Ruth once a month. After the liberation of Belgium, the entire village turned out while the Allies marched down the street. Since there still was no public transportation available, Dr. Rubinstein walked for hours to see her. Ruth reunited with her parents, and in 1948 they immigrated to the United States on board the New Amsterdam, arriving on November 5, 1948.