Four cousins pose in front of a memorial at the Leipheim displaced persons camp. 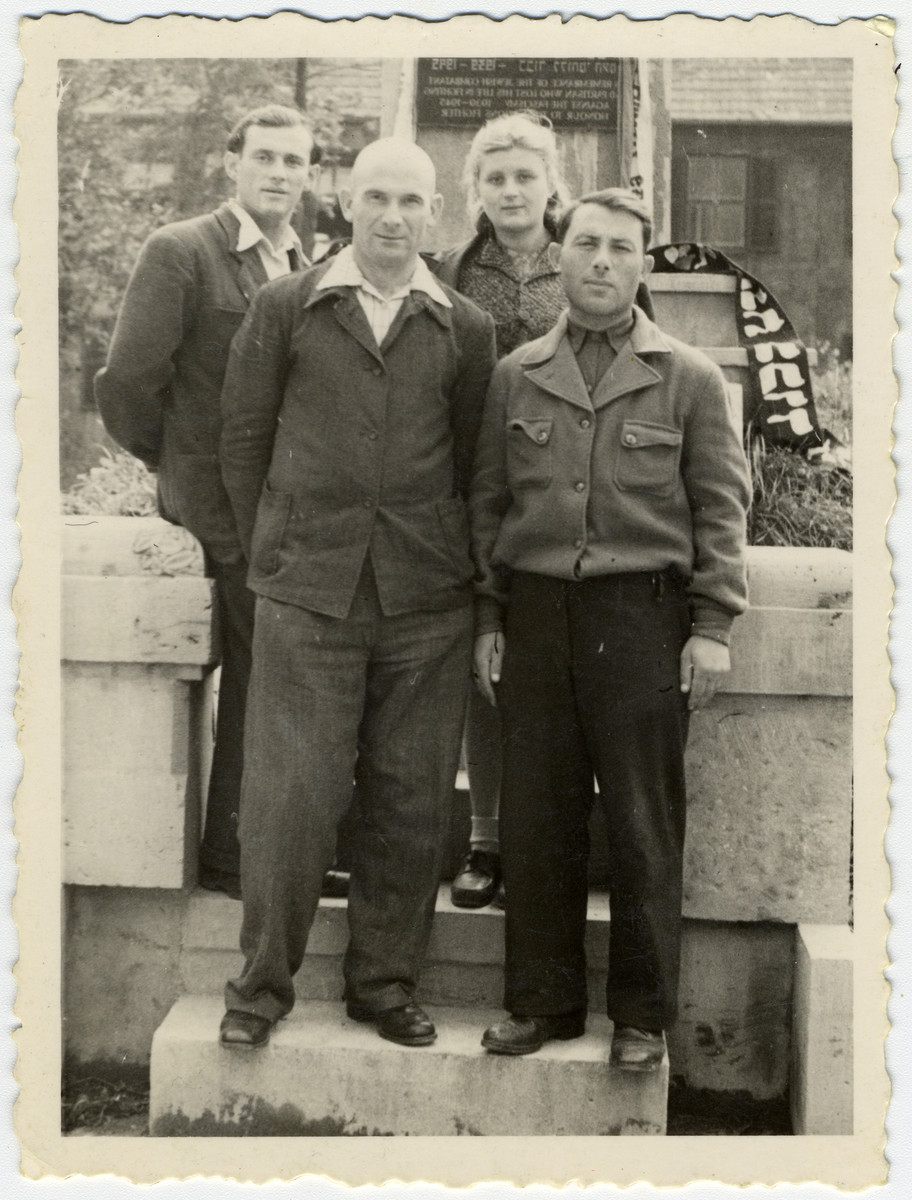 Four cousins pose in front of a memorial at the Leipheim displaced persons camp.

Standing in front are Zalman and Rubin Kaplan. Behind them are Eli Flaks and Dwora (nee Kaplan) Flaks.

Biography
Frances Kaplan (now Penan). Her father, Rubin Kaplan, was the oldest child of Nakhman and Yenta (nee Berman). He was born on October 11, 1912, in the small town of Zaluze, near the city of Dabrowica, in Belorussia. There were only eleven Jewish families in Zaluze. His father traded in cattle, and his mother ran a small grocery store. Rubin had five younger siblings. His sisters, Sima and Yocheved, perished during the Holocaust along with their husbands and their children. His brother, Meir, survived the war and immigrated to Israel. His brother, Chaim, also survived, only to be killed after the war by the Ukrianians. His youngest sister, Gitle, was murdered along with her parents in the Sarny woods outside of Zaluze sometime in 1942. Rubin had also been married before the start of the war and had a son. At the start of the war Rubin had been mobilized for the Polish army. After their disbandment, he spent time with the Russian army, working in the automotive parts departments and in a bakery. He was then eventually sent to the Ural Mountains. After the war ended, Rubin returned to Poland and learned the fate of his family including his wife and child. He made his way to the Leipheim displaced persons' camp. Rubin eventually immigrated to the United States and settled in Washington, DC, where he had an aunt, uncle, and cousins. There in 1950, he married Sophie Sherman of Sydney, Nova Scotia. Frances Kaplan was born in 1951 and Judy Kaplan was born in 1953. After the death of his wife, Sophie, he married Ethel Safran from Kolki, Poland, in 1962. Ethel was also a Holocaust survivor. Rubin ran Kaplan's Market, a neighborhood grocery store, located on Florida Avenue NW. He retired in 1982. Rubin passed away on December 25, 2003 in Silver Spring, Maryland.