Identification card and laisser-passer paper belonging to Nety Hirsch which allowed her to continue living and working in Paris because it benefited the Nazis. 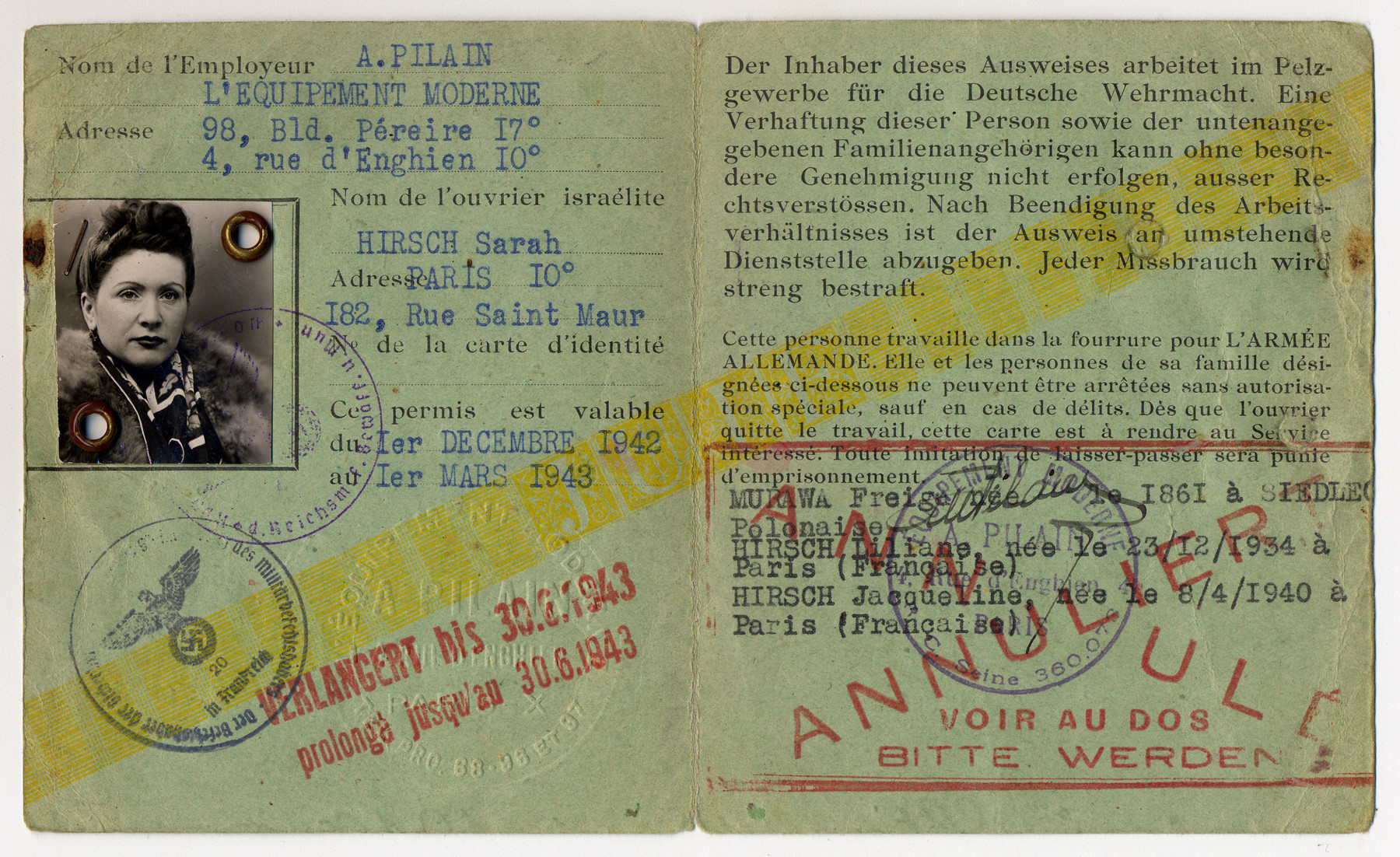 Identification card and laisser-passer paper belonging to Nety Hirsch which allowed her to continue living and working in Paris because it benefited the Nazis.

The papers, which were initially valid between December 1942 and March 1943, were extended until until March 31, 1944 at which point the Hirsch family went into hiding.

The text of the Laisser-Passer reads:

"The owner of this identification card works in the fur industry for the German army. An arrest of this person or the below-specified family members cannot proceed without special approval, outside of a right violation. After the end of the working relationship, the identification must be handed over to the surrounding agency. Each abuse will be harshly punished."

Biography
Liliane Sophie Dockett (born Hirsch) was born in Paris on December 23, 1934 to French citizens Paul Hirsch and Néty (Hammer) Hirsch. They lived in Vincennes, a suburb east of Paris. When the war began, Liliane's father went to serve in the army. Her mother, who was pregnant, and Liliane moved in with Néty's parents: David (a furrier) and Rose Hammer. They lived in Paris. In late 1939 or early 1940, thousands of Parisians fled Paris for what they thought would be safer places. Liliane's grandparents, mother, and she followed this exodus. After several days of walking and sleeping in sheds, they landed in Bénouville, Normandy, a small village close to Bayeux. A priest in the town housed the family for several months. Liliane's sister, Jacqueline Ida Hirsch, was born on April 8, 1940 in a castle converted into a hospital in Bénouville. The following month, Germany occupied France. Because Paris was not bombed, Liliane's family returned to the city and Liliane began attending public school, Rue Parmentier. Two years later the family had to wear yellow stars on all their clothing. One day, a French policeman came to see her grandfather and warned him that there would be a round-up of Jews in their neighborhood. David Hammer paid the policeman some money, and no one was home when the raid took place. This occurred several times.

Another day before Liliane went to school, her mother instructed her to look for a Christian girl her age who had a little sister the same age as Jacqueline. Liliane happened to have a friend who fit the requirements exactly. Her mother then instructed Liliane to the arrondissement Hotel de Ville (City Hall) and ask for new birth certificates for her sister and herself, saying that they had been lost. She was to use the names and birthdates and places of birth of the two Catholic girls (Liliane's friend and sister). Somehow, the clerk who waited on her (most likely understanding of the situation), accepted her story and some time later, two new birth certificates were received. Then, Jacqueline and Liliane were taken by a train and on foot to a village near Beauvais. They lived with the children of relatives of a Monsieur and Madame Fresnot. Jacqueline was then two or three years old.

Liliane's grandfather had been ordered by the Germans to make fur vests for their military. Because of his usefulness, he was issued papers allowing him, his wife and daughter to remain in Paris. When he completed the order, the papers were annulled. Soon, Liliane's grandfather no longer had money to pay the French police, and they had to go into hiding. Liliane's mother purchased false papers and became Simone Brandon. Her grandparents still owned a fur workshop at 24 Boulevard Poissoniere. By day, they hid behind a false wall partition in the bathroom, coming out only at night when the whole building was empty . Some non-Jewish French friends brought them what they could. They remained there until the liberation of Paris.

Before the whole family went into hiding, one day, after returning from school, Liliane found her best friend Madeleine Opalek, a year or two older than her, crying on the sidewalk. She told Liliane that her parents weren't there when she got home. The door was open and the furniture was in disarray. Liliane didn't know what to do. Without realizing the danger in which she placed her family, she brought Madeleine home to her grandparents. She stayed hidden with Liliane's grandparents until after several months they were able to find a safer hiding place for her. Madeleine's parents never returned. She found out after the war that they had died in a camp in Poland. Eventually, she was repatriated with an aunt in Belgium. Liliane saw her again only in 1974.

In 1946, Liliane's parents divorced. She, her mother and sister immigrated to the United States in 1947. Her grandmother passed away in 1959, her grandfather in 1974 and her mother died in 1963. Her grandfather never recovered financially. Liliane did not discuss her history even after the war. Having been taught not to divulge their secret, even as an adult few people knew her story.