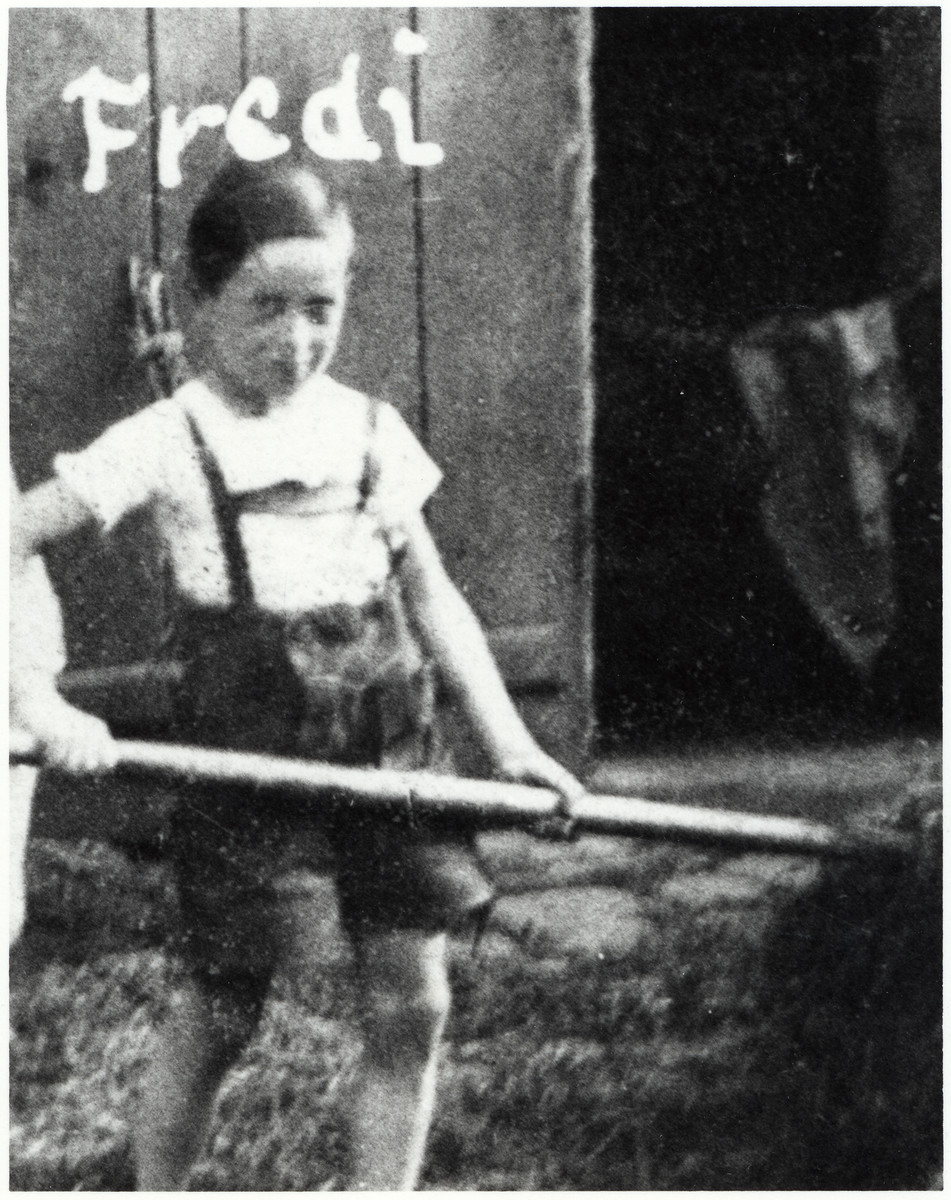 The original captions reads "Me in happier times about 1937 making hay while the sun shines".

Biography
Alfred (Freddie) Traum is the son of Elias Traum and mother Gita Alster Traum. Freddie was born on March 22, 1929 in Vienna Austria where his parents ran a business. He had one sister, Ruth (March 22, 1926). Elias Traum was severely crippled as a result of injuries sustained in World War I. Since it was difficult for him to the leave the house, he spent his afternoons playing with and instructing Alfred. Though the Traums had a traditional Jewish home, they lived in a secular neighborhood, and most of Freddie's playmates were not Jewish. Freddie attended a public school in the Meidling district. However following the March 1938 German annexation (Anschluss), things changed drastically for the Traums. Freddie was expelled from his public school and sent instead to a Jewish school farther from home. After learning about a Kindertransport, Elias and Gita decided to send their two children to England. They hoped they would be able to obtain visas and join them but were never successful. One of Mr. Traum's business colleagues helped arrange for the two children to be placed with a family in England instead of a hostel. On June 20, 1939 Freddie and Ruth, left Vienna and went to live with Mr. and Mrs. Charles Griggs, a working class family in London who had a daughter and son close to their ages. After the start of World War II the Traum children along with thousands of other children were evacuated from London and sent to the English countryside. Freddie spent the next three years in the country, separated from his sister. After the war ended, Freddie learned that his parents were deported from Vienna to Minsk, in Belorussia on June 2, 1942. From there they were sent to the nearby killing center Maly Trostinec and shot. Freddie's grandmother Sara Alster and his paternal grandparents also perished in the Holocaust. After the war, England decided to grant citizenship to the almost 10,000 children who had sought refuge there. Freddie moved to Manchester and became involved with a Jewish community for the first time since leaving Vienna. He joined the Zionist youth movement Habonim, and in 1948 he volunteered to serve in the Israeli army and fight in its War of Independence. After the war, he returned to England to fulfill his obligatory two year service in the British Army as a tank commander in Germany in the Royal Scots Greys. After his discharge, Freddie attended the Merchant Navy Academy to train to join Israel's new merchant marine. He returned to Israel and became the chief radio officer aboard the newly commissioned S.S. Zion. During one voyage, he met his future wife, Josiane Aizenberg who had survived the war as a hidden child in Belgium. After their marriage, Freddie went to work for IBM. The Traums moved to the United States in the 1960s to obtain medical care for of one of their three children, and Freddie worked as Telecommunications Engineer for the Boeing Company. Ruth married David Doniger, a British Jew, in 1947. They and their two sons immigrated to Israel in 1956 and joined Moshav Habonim.