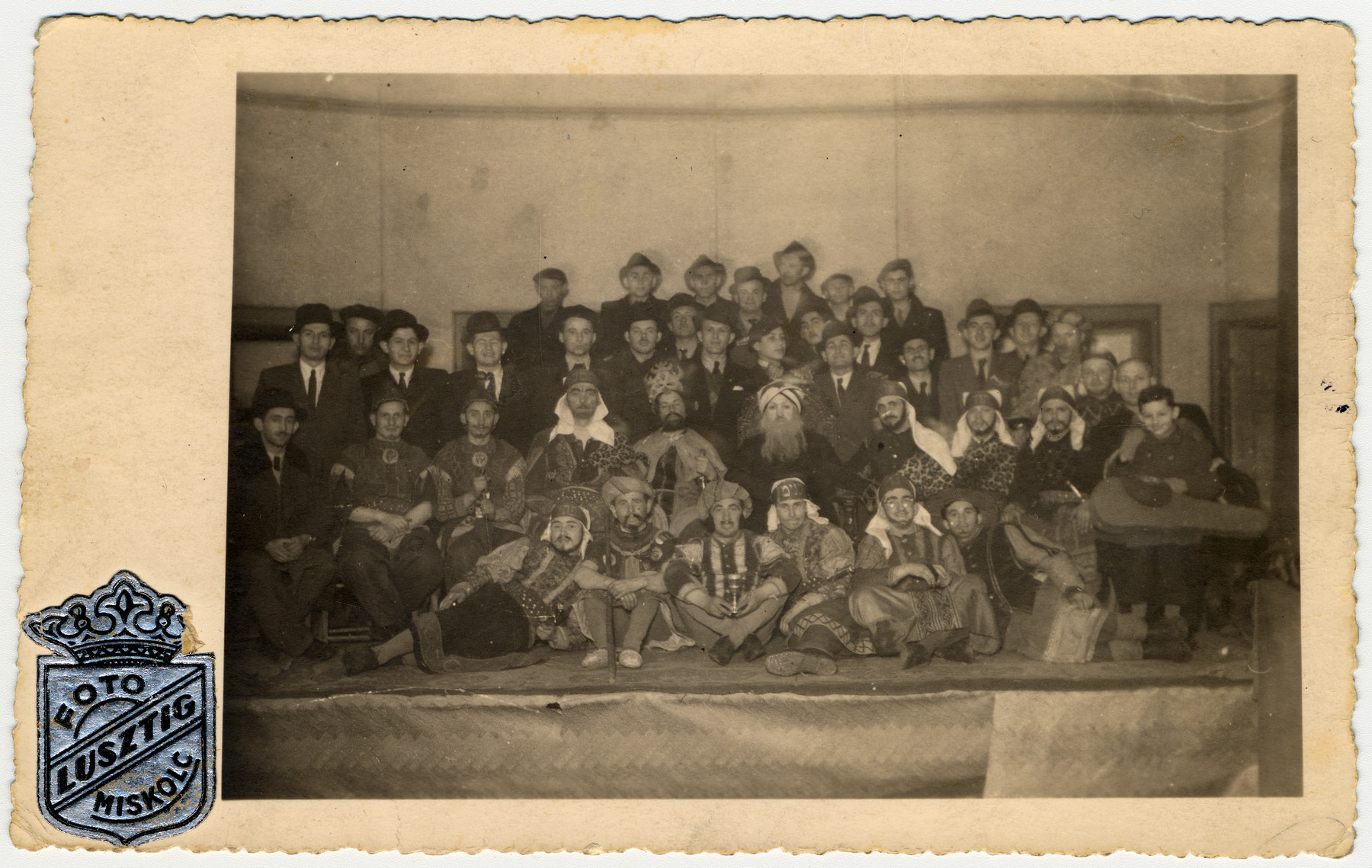 "Yosefspiel" (Joseph), a light opera based on the biblical story, was a popular feature in prewar Yiddish theater. William (Bela) Rosenthal learned the opera while studying in Miskolc and first performed it in his hometown in 1931. Mr. Rosenthal survived the war and staged a repeat performance of the opera with other survivors in 1946.

Among those pictured are second row, seated: 4th from left, William (Bela) Rosenthal, Moishe Shoenfeld, Jeno (Yaakov) Rosenthal. Third row: far left Zoli Reisman, (to left of man in beret) then in hat, Pali (Paul) Reisman, Imi Reisman, the young boy over Jeno Rosenthal (seated with turban) is Alexander (Sanyi) Reisman, to his right, head at an angle with moustache Arthur Rosenthal; and Bela Reisman (wearing a hat, second from the right).

According to the aunt of the donor this photo might have been taken between 1941 and 1944.

Event History
See "Komarno" in Encyclopedia of Camps and Ghettos, Volume 2, Part A.
See Also https://www.ushmm.org/exhibition/life-after-holocaust/.
Biography
Miriam Rosenthal (born Miriam Schwarcz) is the daughter of Jeno and Laura Schwarcz of Komarno, Czechoslovakia. She was one of fourteen children. Like many Jews in southern Slovakia, her father was a gentleman farmer. The family spent their summers on the farm and lived in town the rest of the year. Though they were orthodox Jews, the Schwarcz' spoke only Hungarian and German. Following the Hungarian annexation of their region in November 1938, the family's comfortable existence began to deteriorate. While three of the nine brothers had left for Palestine in 1936, the others were pressed into the forced labor battalions of the Hungarian labor service in 1939-40. For a time, the remainder of the family in Komarno was able to escape the general upheaval and live peacefully on their farm. During this period Miriam became engaged to Bela Rosenthal of Miskolc. Not long after, however, Miriam's father died. Then, in the spring of 1944, the Hungarian gendarmerie began rounding up the Jews of the region. Bela sent a non-Jewish friend to escort Miriam to Miskolc. On the evening of her arrival, April 5, they were married. Two weeks later the ghetto was established and the couple was separated. Miriam was deported to Auschwitz with her inlaws in mid-May. She survived the first selection and was sent to the women's barracks in Birkenau. After several weeks Miriam realized she was pregnant. In order to get out of Auschwitz she volunteered for a transport to Plaszow. She remained there, however, only a few weeks before being sent back to Auschwitz. Though she was already in her sixth month of pregnancy, she survived this selection, as well. Miriam was soon transferred again, this time to the Messerschmitt airplane factory in Augsburg, Germany. One day in December 1944, while at work in the factory, two SS men took her away, after realizing she was pregnant. They escorted her on a passenger train to one of the Kaufering labor camps near Landsberg, where she was placed in a cabin with six other pregnant women. The group was dubbed the Schwanger [pregnancy] commando. The women were forced to work in a laundry. In February they started to give birth. An Hungarian Jewish gynecologist was assigned to help them through, though he was too weak to stand. A Jewish kapo working in the kitchen kept the women alive by sneaking them extra rations. Miriam was the last to give birth and became very ill afterwards. During this period orders came to evacuate the camp. While riding aboard an open train to Dachau her train was bombed. By the time it arrived at its destination, the Americans had already liberated the camp. While recuperating in Dachau, Miriam was recognized by a cousin of her husband. He located Bela and informed him that Miriam and the baby were on their way back to Slovakia. The family was reunited in Komarno. They had to wait for ten months in Paris and another ten months in Havana, before being allowed to join Miriam's sister in Canada in 1947.