Studio portrait of Irena Wojcik, her nephew, Henryk Szymczyk, and her pre-war fiance. 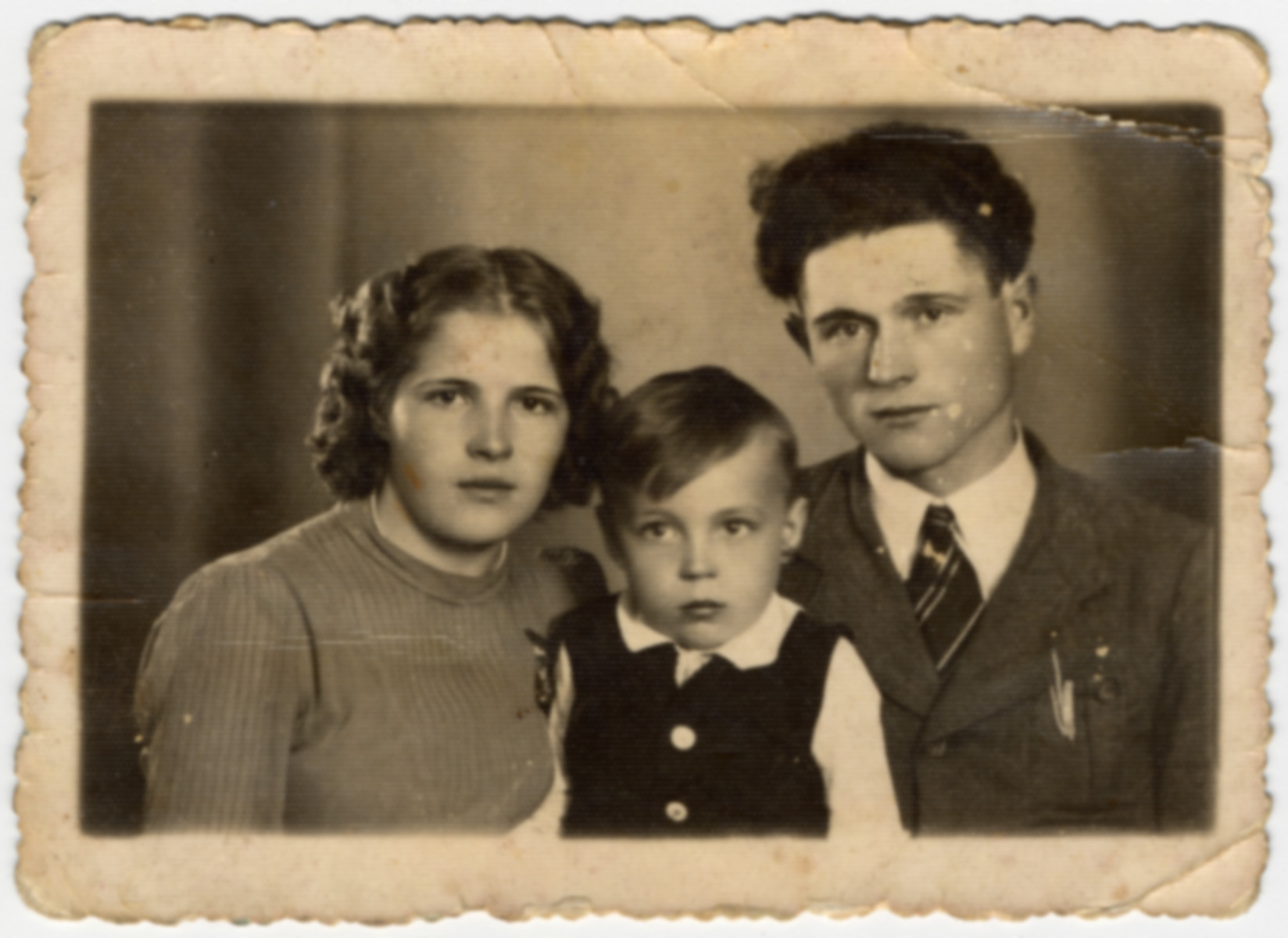 Studio portrait of Irena Wojcik, her nephew, Henryk Szymczyk, and her pre-war fiance.

Biography
Irene Wojtas (born Irena Wojcik) is the daughter of Jan Wojcik and Franciszka Nowak. She was born on 25 October, 1919 in Goluchowice pradelskich, powiat Zawiercie. Before the war she often traveled to her aunt in Pilica or her elder sister, Wlada Szymczuk, in Czestochowa. She was living and working in Wlada's tailor shop when the war broke out and lived there until at least 1942. Her home village was right near the border between the General Government and the Warthegau. While traveling back and forth between the two towns, she was arrested with her brother, Stanislaw Wojcik, for suspicion of black market activities. She was interrogated and later released; he was severely tortured and sent to prison. They were not reunited again until after the war. Irene fled to Czestochowa, although she was supposed to be living in Goluchowice. During a round-up of Poles for forced labor, she was not present to be taken; her father was imprisoned for this. The family sent word to Czestochowa, and she went to secure his release.

She was then deported, via Kielce, to Karlstadt am Main, Germany. She was transferred to work on the farm of George Gold, a local German farmer, in Karlburg. She remained there under harsh living conditions and brutal treatment from April 1943 until liberation. The son of G. Gold was a member of the Nazi military and would occasionally take her, and other Polish girls, to the river to photograph them "for his soldier friends."

After liberation Irena went to the following DP camps: Wurzburg, Aschaffenburg, Wildflecken, Heilbronn, Ludwigsburg, Waiblingen and Bremen-Grohn. She married Eugeniusz Wojtas in Wildflecken, and they had their first daughter there before being sent to Heilbronn, where they had a son. She immigrated to the USA in May 1951.

Eugene Wojtas (born Eugeniusz Wojtas) was the son of Blazej Wojtas and Zofia Stopa, He was born on May 7.1910 in Medynia Glogowska, (Lancut). As a child his family moved to Kolonia Jozefin( Chelm lubelsk)i. He served in the 5 P.S.P. [Pulk Strzelcow Podhalanskich--Podhale Rifles Infantry Regiment], stationed in Przemysl. In 1934 he was released from military service and returned to his mother's home but then remobilized on 15 August 1939 as part of the 43 Infantry Division] stationed at Dubno.

He was captured by the Soviets on 20 Sept 1939; 14 November 1939 as part of the Nazi-Soviet prisoner exchange, he was transferred to Nazi custody transported to the Stalag XIIIC. From the stalag he was used in various labor battalions and was most likely used in civilian forced labor after the outbreak of the Nazi-Soviet war (June 22, 1941). Much of the time he was stationed for work in the vicinity of Gemunden am Main. Upon liberation by the US Army on 4 April 1945, he worked for the military for 22 months and then went to the Wildflecken DP camp.

Eugene and Irene met in either Aschaffenburg or Wildflecken DP camp and married in Wildflecken on February 8, 1948. Their daughter, Elzbieta, was born there on September 24, 1948. She was baptized on November 7. They were later transferred to the Heilbronn DP camp, where Eugene worked as a camp policeman. Their son, Jan, was born there on 10 May 1950 and baptized on June 27.

They emigrated from Germany, via Ludwigbsurg DP camp and Bremerhaven, on board the USS General Taylor in May 1951. They arrived in New York City on June 1, 1951, and were shortly thereafter transported to South Bend, IN. The paperwork to South Bend was arranged by the Parakowski and Kowalski families; whom they'd known in the DP camps. The trip was sponsored and paid for by the ACRPDP: the American Committee to Resettle Polish Displaced Persons.