Zvi poses with his friends at a resort near Katowice at a Noar Dati religious summer camp. 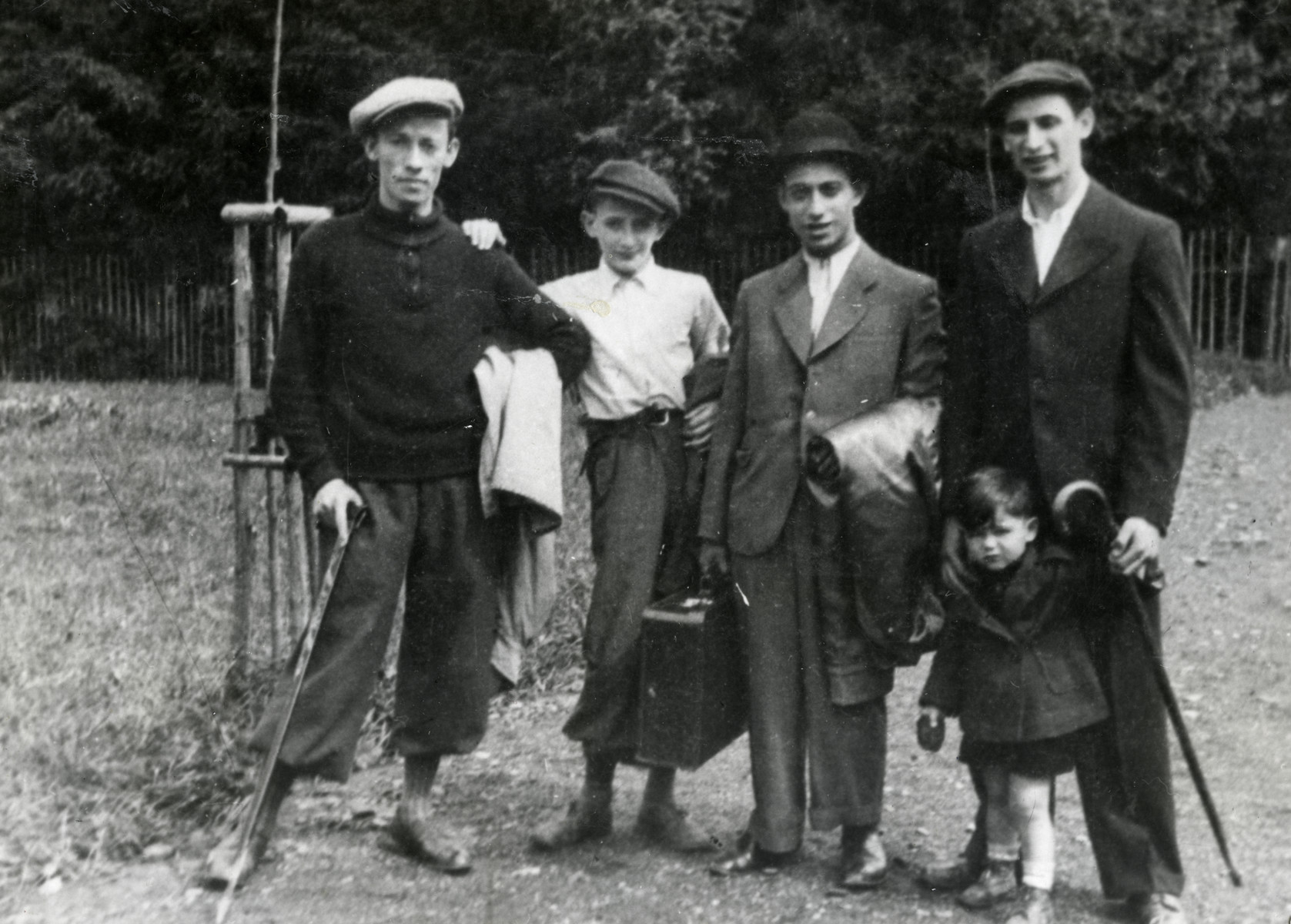 Zvi poses with his friends at a resort near Katowice at a Noar Dati religious summer camp.

Biography
Zvi Yehuda Grundman was the son of Aharon Pinchas and Hinda (nee Goldsher) Grundman. Zvi was born in September 1917 in Jedrzejow, Poland where his father was a synagogue artist. To make a living he also painted commercial signs. Zvi had three older siblings: Malka Raisel, Sarah (b. 1911) and Nathan. Hinda died when Zvi was a baby, and his father remarried her sister Devorah as was the custom. They then had four more children: Shmuel Josef, Yaakov, Eliyahu and Hinda. Prior to WWII the family lived in Sosnowiec and Katowice. Zvi attended the Mizrahi religious Zionist high school in addition to yeshiva once a week. He studied there all night on Thursdays and returned home on Friday afternoons. Zvi also did Hachshara training to prepare for his eventual immigration to Palestine. When Zvi was 17 he was drafted into the Polish army and put into an artillery unit taking care of horses. Since he was good at mathematics, officers assigned him the task of calculating the direction and distance for shooting cannons. Local Jews provided him with kosher food. After the German invasion of Poland, Zvi was taken prisoner; he was housed with other Jews under decent living conditions. Three tailors took him under their wing and taught him how to refurbish old uniforms. Zvi stayed there for approximately one year. He also was able to correspond with his parents and knew that they had been sent to the Sosnowiec ghetto.

After his release from the POW camp, Zvi visited his parents in the ghetto and volunteered to work as a graphic artist. He even received a salary from the Germans. He next was sent to a forced labor camp Pozemiece where he was put in charge of painting signs, with the names and illustrations of the wild animals such as boars, deer which were raised in the nearby forest. Occasionally the Germans asked him what supplies he needed to enhance the signs, and he often told them that butter and eggs would make the paint shine. The commandant of the camp was a brute but another captain protected him; even allowing him to pray. The carpenters who worked there built the captain a coach and asked Zvi to paint it in red and black, the Nazi colors. In reward, he twice received a two-day pass to visit his parents. He managed to see them the first time, but when he returned the second time, he found the house empty. He took three photos with him and returned to the farm where he heard artillery fire coming from nearby Russian troops. He had hoped to be able to remain where he was until he was liberated by the Russians, but instead he was evacuated and sent west to Buchenwald. He took his tefillin and a few photos with him.

Standing at roll call, he heard someone calling "Hey Goldsher "and turned to see his younger brother Shmuel. Shmuel told him that he had met another brother Yaakov in another camp who relayed what happened to the elderly and children. Their father and sister perished in 1942; Yaakov later succumbed as well. In 1945 Zvi and Shmuel were sent on a death march from Buchenwald where they walked westward for weeks. One morning Zvi woke up to find that his clogs had been stolen; without them he could not continue. Since they had been sleeping in barns along the way, his brother found one with a loft that had a ladder and straw and said he would bury him there. The next day when four or five people did not answer at the roll call; the Germans shot two who tried to hide in the barn. The Germans searched the barn and felt around in the attic but did not find Zvi. Zvi remained buried for 17 days. Although he heard voices calling and telling him that the war was over he was afraid to go down until he could no longer stand being alone.

After liberation he met an American Jewish chaplain, Gelber, who took care of him; giving him underwear, clothes, tefillin and a wrist watch. From there he went to DP camps looking for his brother Shmuel, writing to the Red Cross and searching in the German and Russian zones for survivors, family and friends. He joined with a group of other survivors who fabricated a story saying they were British prisoners of war from Palestine. The Russians believed them and fed them. Zvi helped create false documents to prove their story. The Russians provided them with a train that took them to the English zone. Some of the men, including Zvi were put in a hospital and taken care of by nuns. From there they were sent to Davos to recuperate staying in "DasBayit" and then in a pension "Eitanya". After his recuperation Zvi went to study graphics in Basel. In Switzerland Zvi read an article in the Jewish Chronicle written by his cousin Harrendorf and discovered that his brother was alive and studying at the Bezalel art academy in Palestine. (His brother Nathan also survivied after being sent to Siberia.) In 1949 Zvi sailed to Israel on the "Transylvania" and lived with his brother Shmuel in a small apartment in Talpiot. Shmuel married and moved to Tel Aviv; Zvi married Lea Crancurs in 1958 and started a career in synagogue decoration, as a tribute to his murdered parents and family. Later he became famous for his paintings based on religious themes. Zvi died in 1995.