Prewar photograph Herskowicz family in front of their home. 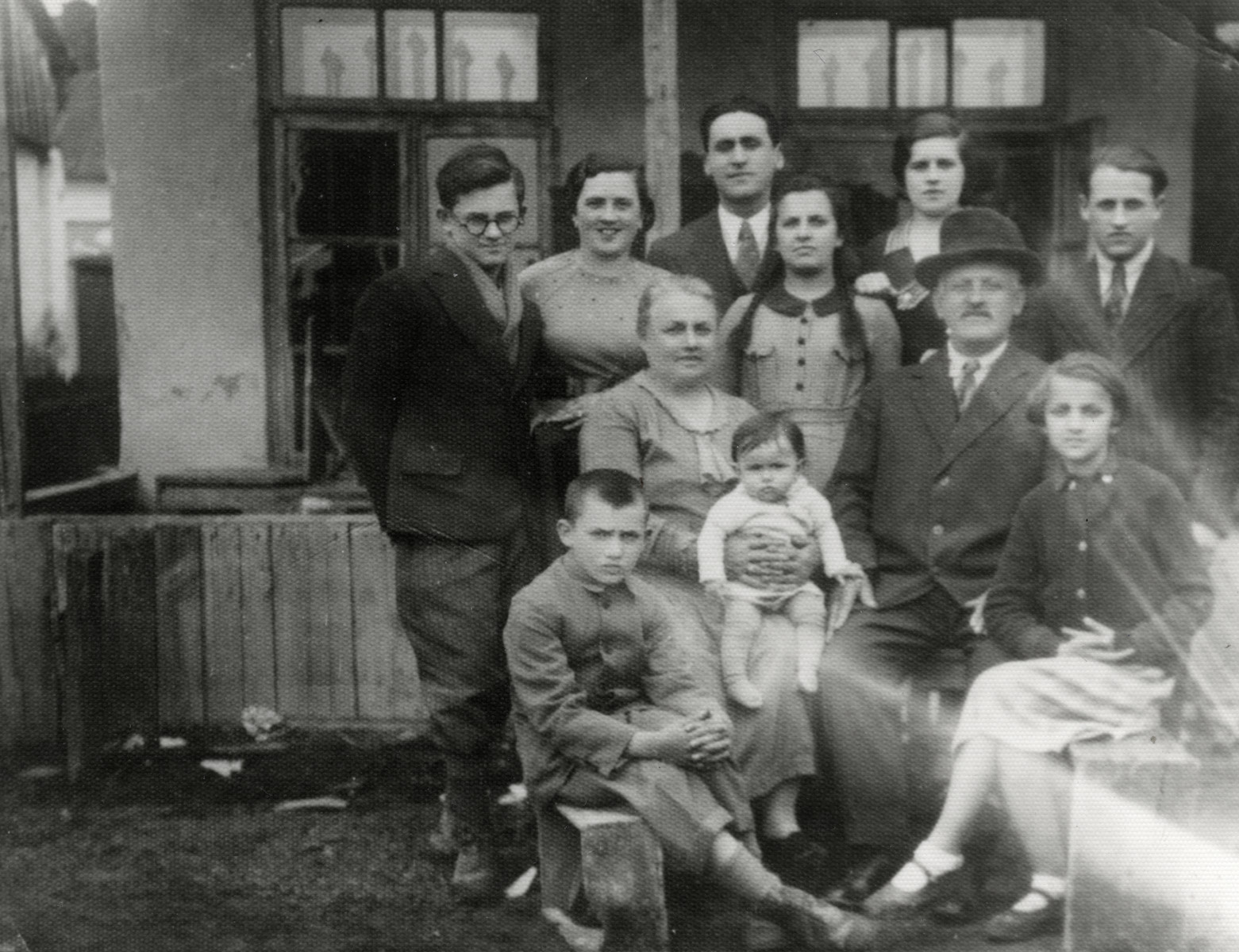 Prewar photograph Herskowicz family in front of their home.

Pictured are the grandparents Bezalel and Yehudit (nee Salomon) Herskowicz. Yehudit is holding her grand daughter Erica on her lap. Seated on the far right is the youngest daughter Leah. Standing in the center (with braids) is Tova. Back row (left to right) are Zvi, Minna, Zvi Daniel and Rivka (nee Herskowicz) Daniel (the parents of Erica), and Ely Herskowicz.

Biography
Ditza Goshen (born Ditza Azriel) is the daughter of Smuel Enoch Azriel (b. Dec. 15, 1913 in Frumusica, near Iasi) and Minna Herskowic (b. May 23, 1910 in Podul Iloaiei). Both of Ditza's parents were one of eight children and grew up in small villages where the majority of the population was Jewish. They spoke Yiddish at home, and Minna also knew Hebrew. Ditza's grandparents ran a pub and her mother helped out there. She only went to school for four grades. Smuel and Minna married in 1937 and settled in Podul Iloaiei where their two children were born. Ditza's older brother Binyamin (Benno) was born on September 21, 1938, and Ditza was born on November 8, 1941. Smuel owned a business that sold confections and textiles to the Romanian army.

On June 28 and 29, 1941 a deadly pogrom broke out in the nearby city of Iasi resulting in the deaths of thousands of Jews. A few days later some 2500 survivors were then herded into evacuation trains. The second death train went to Podu Iloaei with 1,902 Jews along with 80 corpses of those who had been killed earlier. Hundreds died along the way. The gendarmes told the local Jews that they had to bury the Jews that died on the train. Some of those who remained alive were taken to the houses of local Jews. The Azriel family took in six people into their apartment which consisted of two rooms. Minna had to cook for all eight adults. Ditza was born in November 1941. When Minna went into labor, the Iaisi Jews stayed in the adjoining room and read psalms. (Later in 1972 when Minna died, two of these people read the death announcement in the newspaper and paid a visit to Ditza.) In 1942 Ditza's parents moved to Iasi, but Smuel was sent to forced labor. Because of his prior work as a supplier to the army, he was released after eight months. At the end of the war he began to work selling pelts of fur.

Ditza's uncle, Shraga Herskowic had immigrated to Palestine on a legal certificate and joined the Jewish Brigade. After the war he returned to Romania and tried to persuade his other siblings. After the war, Minna's siblings and mother all immigrated to Palestine between 1946 and 1947; some legally; others illegally. Ditza's family requested permission to leave Romania for Israel in 1950, but permission was not granted. In 1956 a brother-in-law of Ditza's aunt visited Iasi and spoke to Smuel in the synagogue. The next day Romanian police arrested Ditza's father. He was sentenced to prison for 15 years in prison for spying. He was tortured and sent to forced labor building moats. The government pardoned him three years later and in 1960 the family immigrated to Israel. Smuel worked with his brother distributing milk products. Binyamin, Ditza's brother served in the Romanian army and immigrated with the family. Ditza has three children and six grandchildren and works in the Center for Research on Romanian Jewry at the Hebrew University in Jerusalem.