Ruth and Aharon Friedman play outside their home in prewar Mukachevo. 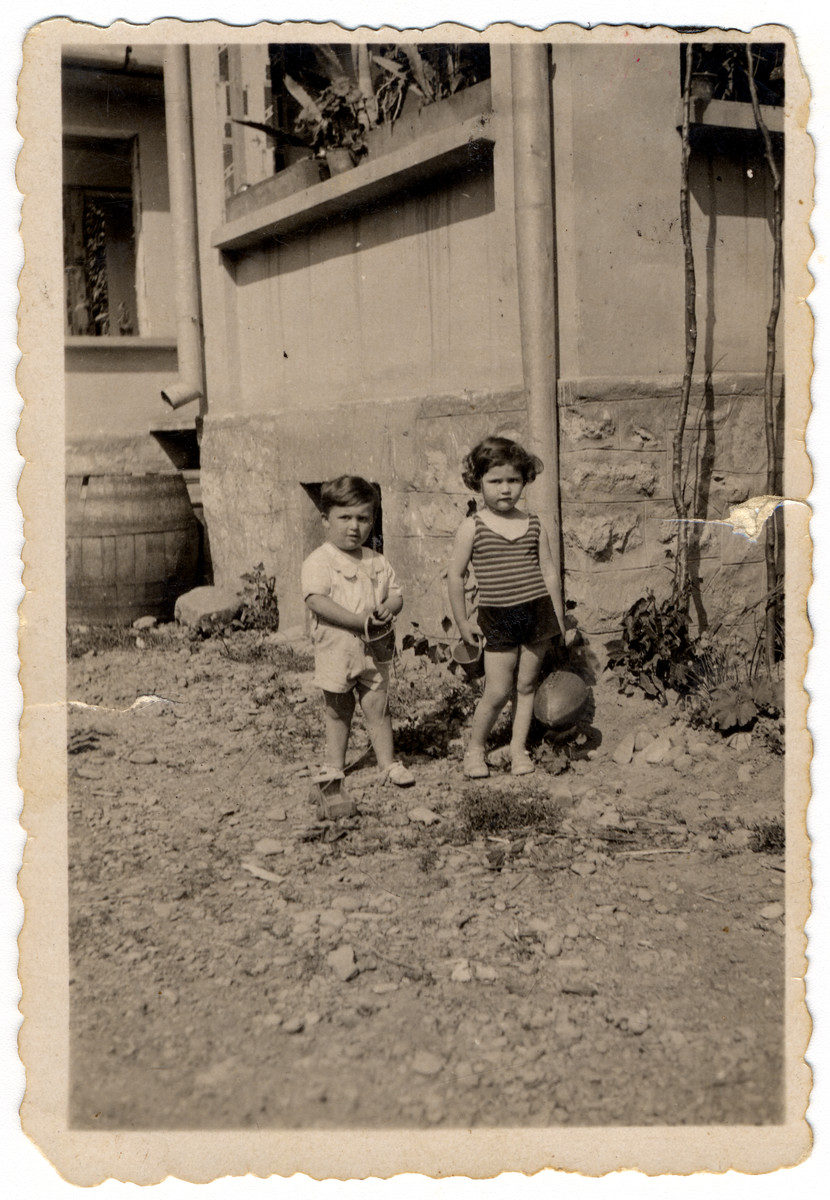 Ruth and Aharon Friedman play outside their home in prewar Mukachevo.

Biography
Ruth (Raizel) Renee Cohen (born Raizel Friedman) is the daughter of Herman and Bertha (Breinde) nee Schwartz Friedman. She was born on April 26, 1930 in Mukachevo where her father and uncle manufactured wine, liquor and beer. Though primarily wholesalers, Jewish customers came each Friday afternoon to buy wine for Sabbath. Ruth and her siblings helped her father fill their bottles. Ruth had one older sister Teresa (later Fischgrund) born in 1923 and a younger brother Aharon (Arie). Ruth's grandfather, Shimshon Friedman passed away in the 1938, her grandmother Esther Friedman lived with them as well. The family was both Orthodox and Zionist; the family were followers of the Spinker and Belzer rebbes. The children attended the Hebrew Gymnasium. Aharon, a very gifted student who supplemented his school studies with private tutoring, dreamed of becoming the chief rabbi of Chicago.

Though the Holocaust did not really come to Hungary until 1944 Ruth and her family had an awareness of what was happening elsewhere. After the break-up of Czechoslovakia, Herman could no longer own his own business though he continued to work there. In either 1940 or 1941 the Friedman's German governess, who had been quite devoted to the family, received a letter from her parents telling her she had to come home since she was not allowed to work for Jews any more. Then in 1942, the Friedman's lost contact with Bertha's family in Slovakia. They learned that her brother Avraham Yosef Schwartz, a rabbi in Ormeny, near Nitra, had been killed. Bertha's sister Rosa Jonap was also arrested. Bertha went into mourning upon hearing the news and stopped listening to music and attending entertainments. Rosa's daughter Hedwig Haber sent her two younger children Leo and Esther Haber to live with the Friedmans since Jewish life in Mukachevo was still relatively safe. Bertha's other brother, Rabbi Moritz Schwartz ran a vocational hachshara in Hlohovec and saved 137 people in his attic.

In March 1944, Germany occupied Hungary and immediately began imposing antisemitic ordinances. In April the Friedmans had to move to a ghetto and the following month they were sent to a brick factory next to the railroad tracks. After a day or two, they were told to board a deportation train. Ruth's biology teacher refused to board the train and was shot on the site. When they arrived at Auschwitz the family was divided; Ruth's mother and brother were sent to the left and killed. Herman was selected for labor with other able-bodied men, and Ruth and Teresa were sent to a woman's barracks. To their fortune, Teresa found a friend from summer camp, Miriam Leitner. She had been deported from Slovakia two years earlier and was now a Blockaelteste. She took the sisters under her wing, and gave them a little bit of food and somewhat better work. Ruth became a runner. She had to wait by the entrance of the compound and be available to deliver messages as needed. At one point Ruth developed typhoid fever and was in the infirmary for about a week, but she was allowed to return to work when she returned. The girls learned that their father was still alive and managed to see him once. They also regularly met their mother's younger brother Elish (Shia) who came to Auschwitz from Terezin. One day he no longer came to their regular rendezvous, and they learned that he too had been murdered. In late October, soon after the resistance blew up the crematoria, the sisters were sent in a transport of approximately 500 women to Nuremberg. They were sent to work in a factory that manufactured airplane parts. Conditions were much better than in Auschwitz. Their supervisors were civilians who sometimes smuggled in extra food for the women. However, soon afterwards, the Allies began bombing Nuremberg. The women could no longer work and spent their days in bunkers. They then were transferred to Holleischen concentration camp (a sub-camp of Flossenbuerg) in Czechoslovakia. Ruth became quite ill and was only able to work for a few days while she was there. In early May the prisoners noticed that their guards began leaving and then shortly before the end of the war, Russian and Ukrainian partisans liberated the camp. Ruth and Teresa made their way back to Mukachevo where they reunited with their father; he had returned home the previous month. Ruth lived at home for about a month and then for the next year recuperated in different hospitals and sanatoria. Throughout this period the family corresponded with Ruth's maternal aunt and uncle, Aaron and Fanny Stern who had immigrated to the United States before the war. Though not wealthy themselves, the Sterns regularly sent them packages and eventually visas and boat tickets. Ruth and her father immigrated to the United States on April 24, 1948; Teresa followed about six months later. Herman found work as presser of neckties, and Ruth worked as well. At the age of 22, she married Benjamin Cohen whom she met while working as a cashier in the Educational Alliance.