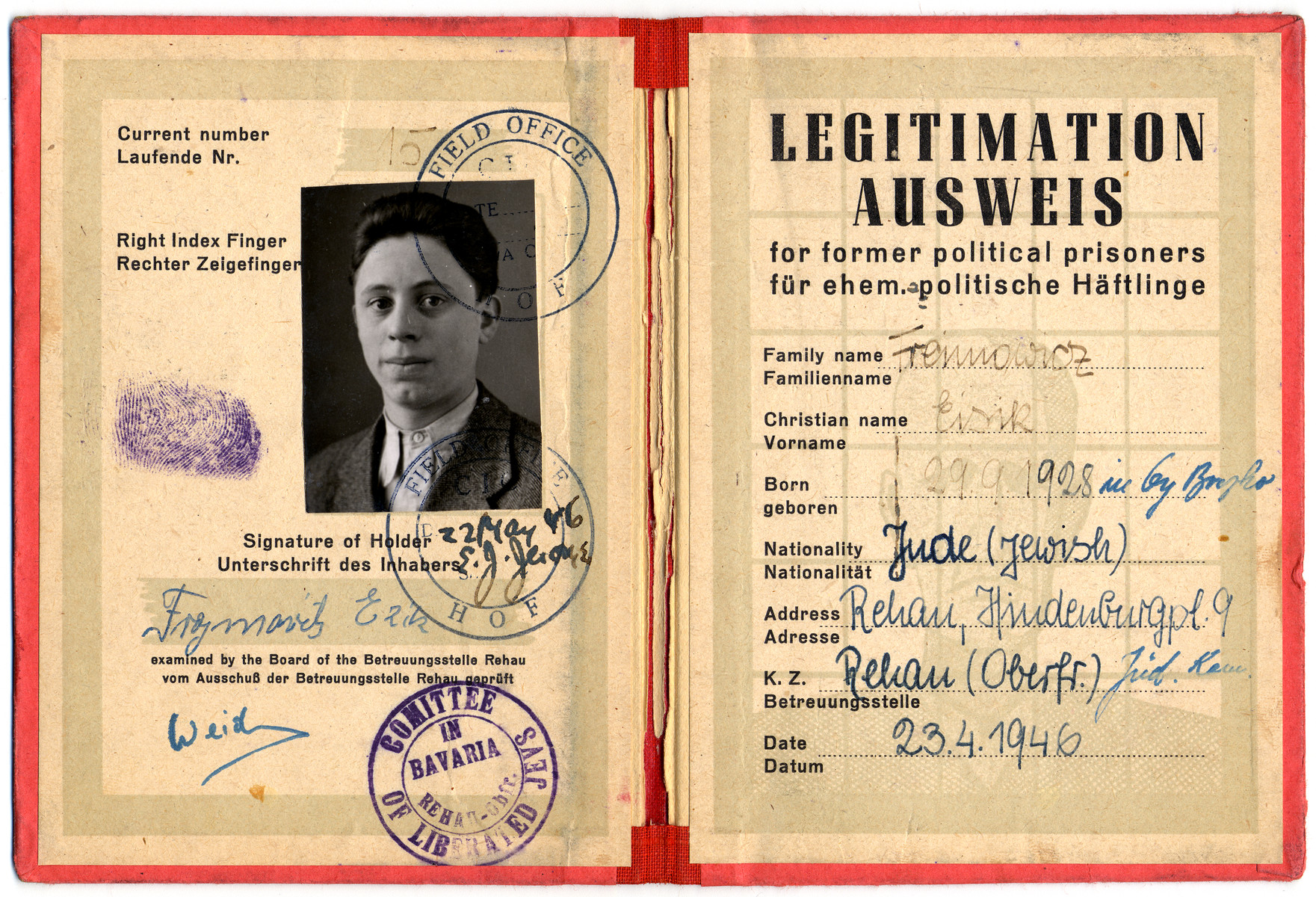 Biography
Erwin Froman (born Eizik Freimowitz) is the son of Frank and Bertha Freimowitz. He was born on September 19, 1928 in Bocicoiu Mare, Romania where his father was a tailor. He had nine older siblings: Rachel, Morris, Nathan, Frieda, Goldie, Alexander Esther, Helen and Perl. The family was Orthodox and Erwin attended both religious and public school. In 1940 Hungary occupied northern Transylvania and began enacting antisemitic legislation. Eizik could no longer attend public school though he could continue his Hebrew studies. However, often he was forced to perform menial labor such as cleaning latrines and chopping wood instead of going to school. In March 1944 Germany invaded Hungary and occupied his village. The following month, shortly after Passover, the family was sent to a ghetto in Slatina, across the river from Sighet. After three weeks, they were deported to Auschwitz. Eizik went through the selection with his father. Though father told the SS that he was a skilled tailor, he still was selected to be gassed. Eizik remained with a nephew and together they were sent to a barrack. After a short while, Eizik was brought by train to Mauthausen and then to Melk. There he was forced to build concrete tunnels. American planes bombed the area, and there were occasional cave-ins resulting in numerous casualties. As Allies units approached, the prisoners were marched to Linz and then Ebensee. Eizik was liberated there by the American army on May 8, 1945. Red Cross units fed the surviving prisoners, but Eizik was unused to the rich food and became seriously ill. He spent the next two weeks in a hospital only semi-conscious. After he recovered he returned home hoping to find surviving family members. Though he found no one, a former Czech partisan informed him that his sisters had survived. Eizik went back to the American zone to try to find them. He got as far as Linz but was too ill to continue. However he sent word that he was alive. After spending a few more weeks recuperating he went on to Munich where he reunited with his four surviving sisters, Goldie (later Nisenbaum), Esther (later Praiser), Helen (later Weingarten) and Pearl (later Levy). Of his other four siblings only Alexander survived, having immigrated to the United States before the war. Nathan had died before the war in an epidemic, Rachel perished in Auschwitz with her four children, Morris was sent to Siberia where he froze to death in 1944, and Frieda perished in Auschwitz from disease. They returned to Germany and stayed near Munich. Five siblings remained in Germany for four years during which time they all wed. He then immigrated to the United States sponsored by his maternal uncle in Lorain, Ohio.