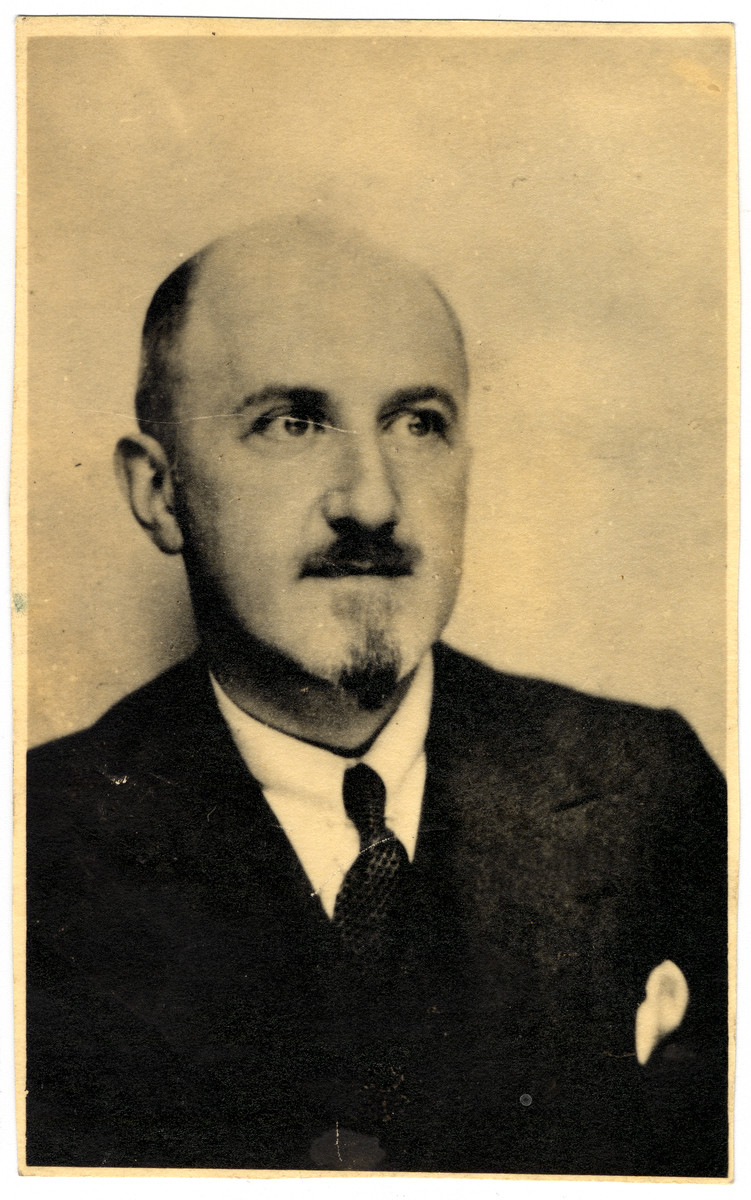 Biography
Dr. Phillip Feist was born on July 21, 1890 in Frankfurt, German. An engineer by training he moved to France in the late 1920s with his wife Hanna and four children Judith, Martin, Jacob and Ellen. A friend of Rabbi Zalman Schneerson, after the German occupation he came to Voiron to help run a religious children's school. One day, while at the Nice train station, Phillip was arrested and sent to the Gurs internment camp. He was later deported to Drancy, and from there, to Auschwitz in September 1943, where he was killed upon arrival.

Hadassa Schneerson (now Carlebach) is the daughter of Rabbi Zalman Schneerson (Chneerson, b. 1898 in Gomel) and Sara (nee Levin) Schneerson. Her father was descended from a long line of Chassidic rebbes dating to the Ball Shem Tov and was a cousin of the Lubavitcher rebbe. Hadassa was born on February 23, 1928 in Nevel, in the Ukraine. Her younger brother Shalom Ber was born in Molochavka on October 1, 1932. Three years later, her parents decided to flee Soviet rule, and the family came to Palestine in 1935. From there, Rabbi Schneerson immigrated to France where he established an Orthodox Talmud Torah and other religious schools in Paris. In 1936 soon after his arrival in France Rabbi Schneerson, founded the Association of Orthodox Jewry in France the A.I.P. (Association des Israelites Pratiquants). That same year, his wife and children joined him in Paris. They remained in the city until shortly after the German invasion of France in May 1940 at which point they fled to Chateau des Morelles in Brout-Vernet to establish an Orthodox children's home for the OSE. Soon afterward, he relocated to Marseilles in the unoccupied zone. There, Rabbi Schneerson reestablished the offices of the A.I.P., ran a small synagogue in his neighborhood as well as a children's home, Seignebon, in la Vieille Chappelle in the outskirts of the city. Over the next four years, Rabbi Schneerson's religious children's homes housed some 60 children whose parents had been interned or deported. Rabbi Schneerson also established an agricultural school in Demu and vocational schools for girls at his home in Seignebon to teach them fashion design. The homes were strictly religious and observed all the Jewish commandments. Hadassa assisted her father in his work as a teacher and nurse. Despite the risks, Rabbi Schneerson never hid his Judaism. He continued to wear a beard, established the only functioning wartime yeshiva in Marseilles and provided kosher food, including matzah for Passover, for prisoners in internment camps in the South of France. To subsidize these many programs Rabbi Schneerson appealed to the Joint Distribution Committee and Jewish organizations in Switzerland, in particular the Aguda. Despite this support, Rabbi Schneerson struggled to find the funds to properly feed and clothe all the children under his care. Following some arrests in Demu, Rabbi Schneerson moved the children to the Chateau de Manoir in St. Etienne de Crossey in Voiron. In September 1943, Germany took control of the area of southeast France that had been previously occupied by the Italians. For the first time, Jews in that region became subject to deportation, Rabbi Schneerson had to disperse the children under his care since they were no longer safe in an identifiably Jewish home. Over the next few weeks with the help of the French resistance, he sent the children, a few at a time, to private homes and farms near Lyon and Grenoble. The younger children were smuggled across the border to Switzerland. Most of the children arrived safely. Tragically however, a group of eighteen youth were arrested and deported from Voiron in March 1944. All but one, Erwin Uhr, perished. Among those who perished was Jacques Rovinski who was only 7 years old. Rabbi Schneerson's wife Sara was captured and tortured to ascertain the whereabouts of her husband. After she kept repeating that he had escaped to Switzerland, she eventually was released. After the war, Rabbi Schneerson and his family returned to Paris, leaving Rabbi Silberstrom in charge of the children's home in Voiron. For the next two years, Rabbi Schneerson directed the A.I.P. organizing religious services and Jewish schools. He also dedicated himself to locating and rehabilitating hidden children. In 1947 he moved to America, returning to France for a few years in the 1950s. Rabbi Schneerson passed away in America in 1980 at age of 82.