Men and women gather around a table for a celebration in the Bergen-Belsen displaced persons camp. 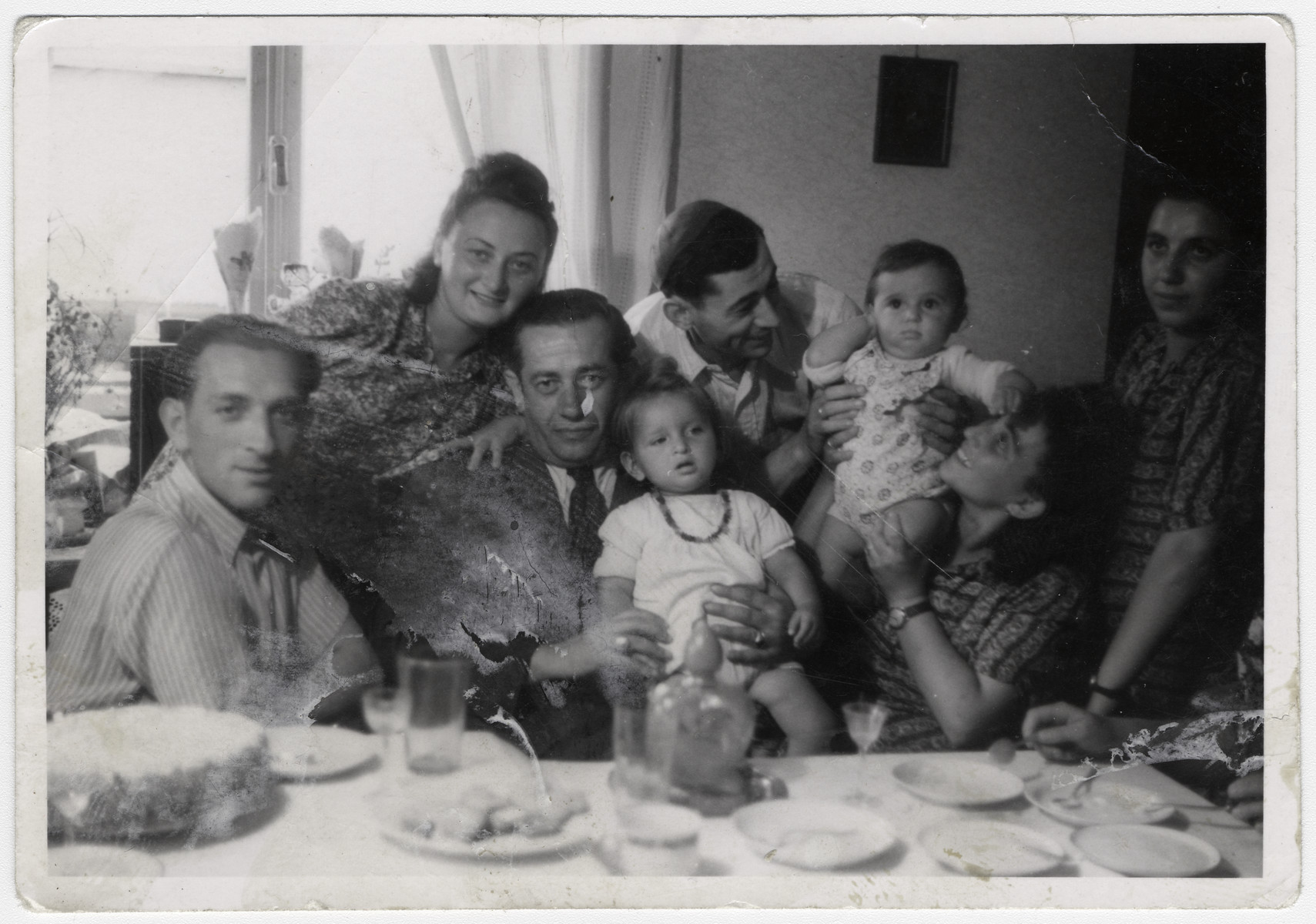 Men and women gather around a table for a celebration in the Bergen-Belsen displaced persons camp.

Left to right (sitting): The second gentleman holding the baby is Elias Rosengarten

Biography
Aaron Rosengarten is the son of Elias (Eliasz Rosengarten) and Esther Brajndla (nee Wierbska) Rosengarten. Elias Rosengarten was born to Tobias and Feigle Rosengarten on March 1, 1909 in Sedziszow, Poland, and he grew up in Tarnow where he worked as a tailor. After the start of World War II, Elias remained in Tarnow working in the Zenmiefur Handelslieferungen until September 1943. He was the deported to Plaszow where he worked in the Madritch textile factory sewing uniforms for the German army. Then in March of 1944, he was transported to Mielec to work at the Heinkel airplane company. In June 1944, he was deported once again to the salt mines at Wieliczka. In July of 1944, he was in Leitmeritz, a sub-camp of Flossenbuerg, working in the armaments industry. By October 1944, he was in Mauthausen Concentration Camp working at Messerschmitt Aircraft Company in sub-camp Gusen II. The Americans liberated the camp on May 5, 1945 and he went to the city of Linz and eventually found his way to Bergen-Belsen.

His wife Esther Wierbska was born on either September 15, 1914 or 1918 to Aron and Ruchla (nee Jablonksi) Wierbska. She was born in Pilica, Poland. Between October 1941 and September 1942, she was imprisoned in the Zawiercie Ghetto. She lived with her parents on Por?bska. Por?bska was located in the ghetto area therefore they were not resettled but remained in the same apartment inside the ghetto. These streets were isolated from the rest of the city; leaving the ghetto area was forbidden under penalty of death. Inside the ghetto was the Jewish police. Initially the prisoners were required to wear a badge with a blue star on the arm, after a few months they had to wear an emblem with a yellow star on the front and on the back. Esther worked for auxiliary works, cleaning in German houses outside the ghetto and in the German police station in Zawiercie. Then in September 1942 she was transported in a closed vehicle to the Neusaltz labor camp (a women's camp), a satellite of the Gross-Rosen concentration camp. On January 26, 1945 she was force marched to the concentration camp at Flossenbuerg, Germany, two hundred miles away. Yet again on March 17, 1945, the two hundred survivors of the thousand women who began a forced march from Neusaltz, Poland, were taken in closed vehicles, to the concentration camp at Bergen-Belsen, Germany. In Bergen-Belsen, they were housed in tents, but they did not have to work there any longer. On April 15, 1945, the British Army liberated the camp.

After liberation, she remained in Bergen-Belsen, now a displaced persons camp. She reunited with her brother Leon. They vowed never to be far from each other and for the rest of their lives lived next to either on the same street block or within the same apartment building. On November 25, Esther married Elias (Eliasz Rosengarten) in the Bergen-Belsen DP camp, and in April 1948 they immigrated to Canada. At first Eliasz worked as a garment presser and Esther as a cleaning woman, but she eventually partnered with her brother to buy a grocery store. In 1951, Eliasz contracted tuberculosis as a result of his internments and spent several years in a sanatorium to recover.