Close-up portrait of Dr. Erne Frenkel, the Rabbi in Bicsk (near Budapest). He later perished in the Holocaust. 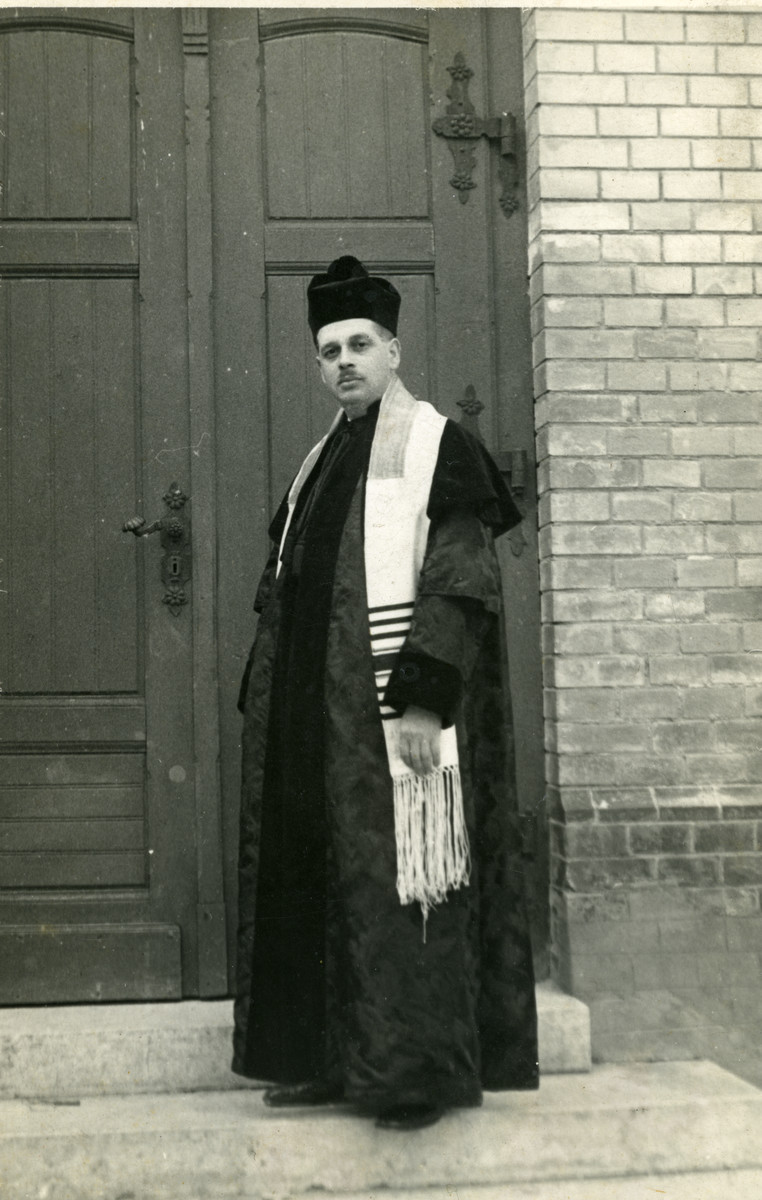 Close-up portrait of Dr. Erne Frenkel, the Rabbi in Bicsk (near Budapest). He later perished in the Holocaust.

Biography
Imre (now Zvi Frenkel) is the son of Rabbi Jeno Frenkel and Edit nee Mandler. Imre was born on July 17, 1929 in Szeged. His sister Judit was born on January 23, 1930, also in Szeged. Jeno Frenkel was born in 1902 in the Transylvanian village of Tusnad. The ninth of ten children, he completed his primary education and attended Talmud Torah in Tusnad and Szilagy. After his family moved to Budapest in 1916, he continued his studies at the high school of the National Institute for Rabbinical Studies. Jeno Frenkel graduated high school with distinction. Besides his achievements in Judaic subjects, he distinguished himself in his knowledge of mathematics and physics. He proceeded to study at the Rabbinical Institute while simultaneously majoring in Oriental history and Semitic philology at the University in Budapest, the two majors open to Jewish students without a quota. There he also joined the Zionist organization, Maccabi. Jeno Frenkel was ordained as a rabbi in 1927 and received the degree of PhD (summa cum laude) from the University.
In 1926, the congregation of Szeged invited Dr. Frenkel to work as a rabbi with the world-renowned Chief Rabbi, Immanuel Low. The following year, he met Edith Mandler whom he married shortly thereafter. (He also maintained his interest in physics and in the early 30s invented a precursor to the modern fax machine. However, his rabbinic functions took almost all of his time.) Since the congregation in Szeged was decidedly assimilationist and anti-Zionist, Dr. Frenkel worked to stem the process of assimilation though expanding knowledge about Jewish history, strengthening Jewish self-awareness, and teaching about Zionism. His mainly worked with the youth. He established the Self-Improvement Group of the Jewish Youth of Szeged and attended its sessions once a week. Members of this group gave high-quality lectures and staged theatrical performances. Dr. Frenkel fought for and won funding for a stage that could be easily assembled and disassembled. After the imposition of the Jewish Laws, this stage was the only one accessible to Jewish actors. Dr. Frenkel also directed the publication of the monthly and organized a Jewish chapter of the Boy Scouts for Jewish youth, which was admitted into the alliance of Boy Scouts over the objections of Principal Firbas, the leader of the Boy Scouts in Szeged. Members of this Boy Scout Group attended Friday night services in uniform. On Saturdays Rabbi Frenkel held separate services for adults. At the request of Rabbi Immanuel Low, Rabbi Frenkel assumed the position of Chief Rabbi, once Rabbi Low retired in 1942.
Rabbi Frenkel also serviced Jewish patients in the city's hospitals and assumed rabbinical functions at the Csillagborton (Prison of Csillag) for the Jewish prisoners, among them both common criminals and political prisoners arrested for their work in the resistance. Rabbi Frenkel was tasked with censuring the letters of Jewish prisoners, but he successfully obtained permission for Jewish prisoners write more frequently with fewer restrictions. Rabbi Frenkel visited these prisoners every Saturday, led religious services and provided kosher food to the prisoners and fought to shorten their prison sentences. Once Hungarians conscripted Jewish men for forced labor, Rabbi Frenkel helped provide conscripts with clothing, shoes, food, and medicine. He even gave a Torah for a unit of those in the Labor Service who were traveling to Bor. He even volunteered to be present at the summary execution of those in the Labor Service accused of desertion, for he professed that those who were going to their death and needed to have a human companion in their final moments. After the rounds of fire, he loudly quoted the seventy-ninth Psalm in Hebrew asking to revenge the blood of God's servants.
In March 1944 Germany invaded Hungary and began imposing the Final Solution there. The Jews in Szeged were rounded-up, sent to the soccer stadium of Vasas and subsequently into the brick factory to await deportation. That summer, the authorities forced Frenkel to serve as the president of the leadership of the Jewish community of Szeged. The first train was sent to Auschwitz while the next two trains were sent to Austria. Most of those in the latter survived. Frenkel, of course, had no prior knowledge of the destination of the trains. Rabbi Frenkel and his most immediate family survived because the Germans transferred them onto a train protected by Kasztner and eventually brought to Switzerland.
In 1945, Dr. Frenkel's children Imre (Zvi) and Judit immigrated to Israel. He and his wife followed in 1949. He worked as an educator in numerous Israeli cities, and following retirement, he and his friend, Nahari Mose, organized a Boy Scouts group in a poor neighborhood of Tel Aviv. They provided for a place to be built, furnished it, obtained a Torah and Dr. Frenkel prayed with his Boy Scouts every Saturday and served as its commander. He also participated in various humanitarian and cultural organizations. Many times, he was elected President of Bnai-Brit Nordau Lodge, of which he became permanent Honorary President of the Transylvanian Hashomer movement, the Hungarian Oleh Alliance and Vice President of Zionist Alliance. For years, he actively participated in the Hungarian Zionist Students, the Makabi and the Bnai Herzl organizations, and was a part of the Hungarian section of the Mizrahi group. He died on June 30, 1989, and his wife followed him on February 17, 1998. Their son, daughter, four grandchildren and fifteen great-grand children now live in Israel.